When you’re Scared of Ultrasounds 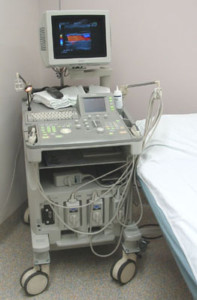 I need to have an ultrasound. I’m not pregnant, and it’s for an issue totally not related to my pregnancies, but I’m still uncomfortable. Even though my appointment isn’t until Wednesday, I’m anxious, and having trouble sleeping. I know there’s nothing to be scared of. An ultrasound isn’t painful. They aren’t likely to have any bad news to deliver. It isn’t even in the same clinic as I went when I was pregnant. But still I’m nervous. Why?

1. I no longer trust my own judgement.

Since losing my boys, I have been paralyzed with the fear that there was something wrong and I ought to have known it. Somehow, in some way, there must have been a sign I missed. Were they kicking less vigorously? Did I feel ill before? I have no idea. But I know that this has now affected all areas of my health. I generally only would think of seeing a doctor if I’m in pain, and especially if that pain is unbearable. Vague symptoms, like fatigue or changes in bowel movements, are really not the kind of thing I would be aware of. Now I don’t trust that I’m not missing something significant.

Obviously, as someone who teaches nurses, I have a fair amount of confidence in their training. And one of the things they’re trained to do is look for the most common cause of a symptom. If you’re tired, it’s pretty unlikely you have cancer, even if cancer is pretty common. There are loads of other, more common things, causing you to be exhausted (hello new motherhood!). This is sometimes called ‘looking for zebras’ after an expression in medicine: “Don’t go looking for zebras every time you hear hoofbeats.” Most of the time, it’ll be a horse! But once you’ve been in the minority of people who have had the unthinkable happen, you don’t quite trust that they’ll look deeper if your symptoms don’t match the standard diagnosis. This isn’t a reflection on my family doctor, or nurse practitioner, both of whom are wonderful. It’s just that once your trust is broken…

There’s no way to avoid this. I can’t just think of an ultrasound as a happy thing anymore. Even if the circumstances are different, I’ll still think of the moment I heard that my boys had died. I will still look at the screen and feel those emotions, of trying desperately to see a heartbeat that I knew wasn’t going to be there. In the same way the smell of pine needles makes you feel like Christmas, or fresh cut grass like those warm days in June, seeing an ultrasound machine puts me back in those dark moments. I’m not alone in this. Joann O’Leary talked of the trauma of ultrasound in the pregnancy after loss here. As one woman said: “So it’s just something that I fear and I get upset. Because lying in the darkened room, on the bed and they’re going to do an ultrasound, just brings back the memories…”

My doctor is sympathetic. He ordered this ultrasound even though he’s fairly certain it will be nothing, just to put both our minds at rest. He asked me which clinic I wanted to go to, to see if going to another location would make me feel better. I truly have nothing to fear. Still, this is just another reminder of how my pregnancy loss has changed me.