Where Courage Comes From 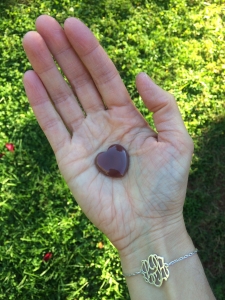 I didn’t write publicly about my first two pregnancies until they were gone. I didn’t announce my third pregnancy until we had seen H.’s whole heart. Fear motivated my desire to wait until we had at least passed the point of our greatest loss—24 weeks, 1 day, 9 hours—the moment I met and held my silent son, who told me more than anyone ever had.

Now, H. is here. She giggles and shrieks and says “silly puppy” to our dog. She is the opposite of silence and stillness. And we are trying to give her a living sibling to shout and run alongside.

It is only the second month we’ve tried, and I am prepared for disappointment again. My breasts aren’t sore. I’m not feeling the hungry need to nap. My period isn’t technically late.

My husband, Ryan, reminds me that I didn’t have symptoms when I first got pregnant with H.

“I’m taking it now,” I say, suddenly no longer able to wait the remaining day until my period is due.

I don’t know where his confidence comes from. He has suffered the same losses I have. He has also lost his father and his mother has a chronic illness. He has never once complained or asked, Why me? He moves forward, believing even after profound loss, that we are OK. I relied on that confidence until the moment H. was born.

Now, she wants up on the bed, already pointing to the jewelry dish on my dresser. I bring it over and we stare into the shallow green glass and the treasures it holds, but she only has eyes for my bracelet with the heart clasp, one of the thousands of hearts I’ve collected for Lorenzo. As she puts it on, I pick up the blush-colored heart stone an old neighbor sent after H. was born. It’s made out of Carnelian stone, which symbolizes courage, vitality, and confidence. I grasp it in my palm and decide that no matter what the test says, I will have courage to face it. It feels like courage Lorenzo gave me wrapped in courage that H. is showing me. I imagine it isn’t a rare moment when any mother of more than one living child feels their influence upon her heart. I think I can speak for most PAL moms when I say how that experience also isn’t rare for us.

I take the test. H. babbles in the bedroom with her bracelet. I place the plastic peek at the future on the windowsill that looks out over our yard: a large square swath of grass our dog loves, a wrap-around fence, and mature trees that give us shade. H.’s swing hangs from one of them. There on the sill, beneath the trees, the second line turns pink.

The first feeling isn’t fear at all. It’s excitement, distilled and unmistakable. Out of habit, I tell myself to temper it, but quickly ask, why? Why not be excited for as long as I get to be? Maybe that is this new baby’s first lesson: that I am allowed this feeling as early as I desire it. We know all too well that to deprive ourselves doesn’t protect us anyway.

I return to the bed and tickle H., setting free her giggles and shrieks. With her on my hip, I walk back into the living room and smile at Ryan, saying it all that way, as I lean in to kiss him. When I lean back, I see his excitement begin, too.

Somehow, it doesn’t fade. We start talking about names the next week, something we didn’t do at all for my second pregnancy, which miscarried, and only once we felt “safe” with H.. But back in our innocence we talked about names right away for Lorenzo, who already had his full name on the day we found out he didn’t have his whole heart.

We aren’t innocent anymore, so how is it we can act like it? How is it that I can tell you I’m newly pregnant? Because we’ve earned our courage. Three pregnancies have already taught us about life, death, grief, hope, joy, and, now with a fourth, excitement anew. I’m telling you not out of the innocence I nearly burst with when I found out about my first pregnancy, but with the knowledge that there was no need for me to feel alone when I lost my babies. I’ve made a commitment since then—to vulnerability and truth as a way to gather strength and help others. So I am telling you how excited I am for this new life, not from assurance that everything will be OK this time, but the possibility that it could be. And that right now, it is.