When your Rainbow Baby’s Birthday is on Halloween 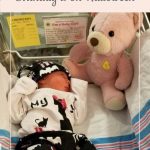 My second daughter, my “rainbow,” was born on Halloween 2017.

Halloween used to be my favorite holiday, and now it is again. For a while, after I lost my first daughter, it was just such a painful day. Decorations on houses, pumpkins, costumes, and the candies in the store all gave me such a bittersweet feeling. More bitter than sweet. Seeing children dressed up with their little buckets in their hands, crunching on the beautiful fall leaves, also reminded me of all I would be missing with my child. I even have a fondness for scary movies and stories, but that changed after her death too. I didn’t want to add to the bad dreams I would sometimes have at night involving my precious baby. 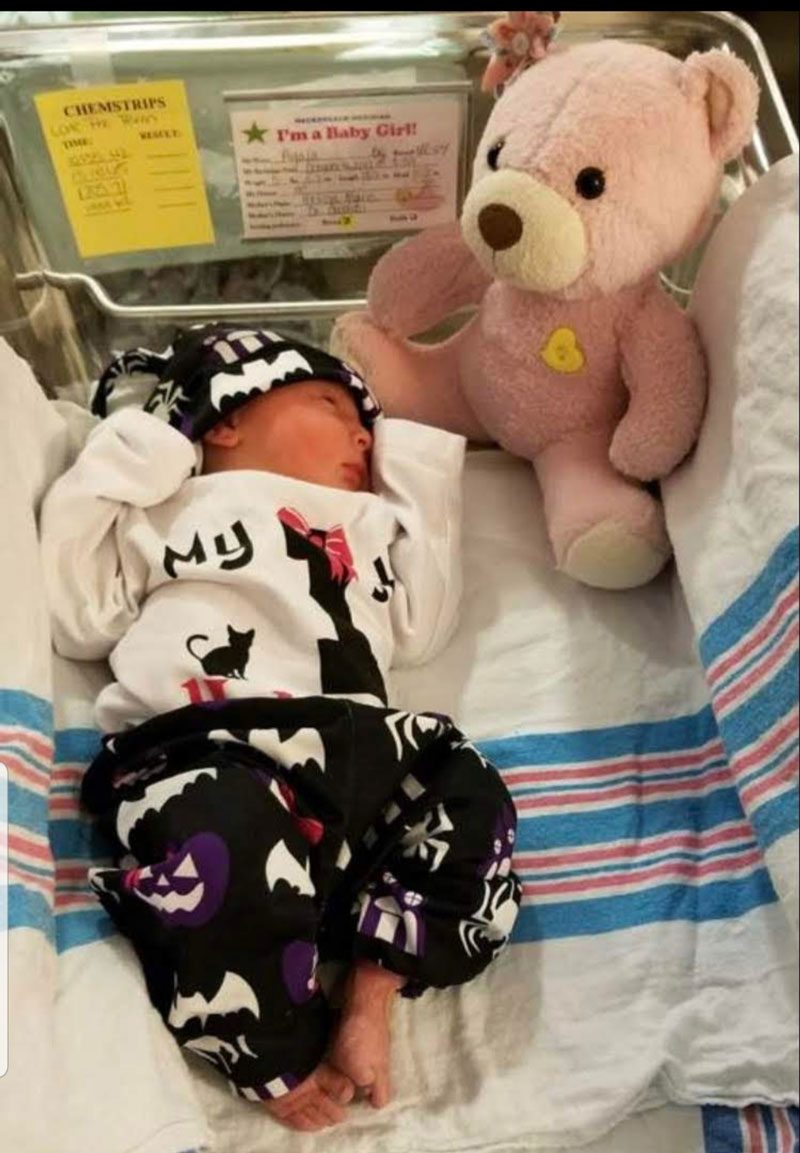 Halloween was only nine days before my daughters first angelversary.

I remember pretending that no one was home when trick or treaters rang my doorbell. Fall in general was a painful reminder since this is when I had lost my daughter.

During this time, I had been told by my maternal fetal medicine (MFM) doctor that if we got pregnant again, I would not be allowed to go past 37 weeks of pregnancy, because I had an inverted T incision c-section with my firstborn. An inverted T incision or classical incision puts women at higher risk of uterine rupture and placenta accreta. An inverted T incision with my firstborn, Alyssa, was necessary because she was only 26 weeks old at the time of her delivery. At this time babies, are high up in the uterus, so a low bikini incision was not high enough to deliver her. After my water broke while I was in the hospital and her heart rate started to drop, the doctors tried to deliver emergently, but it was too late.

Due to this, I was also told to wait one year to try again for another baby, because my incisions needed time to heal. If not, the above risks were even greater. This was another big blow. Not only had my daughter died, but I also felt like I had this surgery done on me for no reason other than to make me wait to try to find some new form of happiness. I had been preparing for motherhood, and now there was nothing I could do about it for another year. Instead I took time to mother my daughter in a different way- through grief.

The year passed and we experienced the first anniversary of Alyssa’s death, with no new pregnancy.

This continued into the New Year, and finally, I told my husband I was going to see a fertility doctor, at least for peace of mind. I did find a very empathetic doctor who offered us intrauterine insemination (IUI) but our insurance would not cover it. So, instead she put me on Clomid for three cycles to ensure I ovulated each month.

When I was ready to reconsider IUI as she had offered, we found out I was pregnant again. Each week I went to the fertility doctor, and they would measure our baby. Eventually we moved to a regular OB and the high risk maternal fetal medicine doctor. Our new journey had begun. We found out I was pregnant on March 21st 2017, due at the end of November, but again it was known I could not make it that far.

I was very nervous throughout the entire pregnancy, and also overjoyed.

I chose to focus on my husband’s and my feelings during the pregnancy, so we decided to only tell very close family and friends until after I turned 32-weeks. It gave me too much anxiety to tell others. During much of this time, I tried not give too much consideration to the date of the next c-section and birth. I just wanted my daughter to be born alive and healthy. My OB/GYN also didn’t discuss it with me until I was farther along.

However the time finally came, and I learned that she only performed scheduled c-sections on Tuesdays. This left me with what I thought were two options–deliver on November 7th, the day before our Angel’s anniversary of both death and birth (when I would be 37 weeks exactly)  or on October 31st, Halloween (when I would be 36 weeks exactly).

I had a really hard time with this decision and felt a lot of guilt.

At 37 weeks, and one day before Alyssa’s birthday, our daughter would be considered late preterm. Each day inside of the womb would give her a better chance at birth. However what if their birthdays were back to back? How would I deal with the different emotions every year. And, would people forget or not pay much importance to our daughters angelversary because the day before would be such a celebratory day? But, if I delivered on Halloween, she would be considered a preemie and there was more of a chance she would go to the NICU. If I made the choice for Halloween and she had to go to the NICU, I would feel it was my fault, and would have a very hard time forgiving myself. What if there were further complications? I talked to my husband about all of this, but he felt it was better if I decided.

I finally talked our high-risk doctor about the dates and what he thought. He informed us that he didn’t even want me to go into my 37th week of pregnancy, so 36 weeks it would have to be. He made the decision for me: Halloween.

Now this day wouldn’t be so gloomy anymore. Now this “holiday” could be my favorite again. Now this day would have renewed meaning for me, a meaning I can’t even begin to explain. Most of all, I felt that Adelina had chosen this date to be her birthday, knowing how hard the day had become, and this is why she came to me when she did. I think her big sister guided her along the way, too.

Throughout the pregnancy I did meditation everyday to try to connect with Adelina.

I knew that some moms, especially loss moms, could have trouble bonding with their babies, and having a c-section could potentially increase that risk. So, I chose to try meditations I found on YouTube to try to connect. They were only about 10 minutes long, and at that time, without having a child crawling or running around the house, I had more time to do this. One of the meditations I chose had a small part where the narrator said to say something to your baby out loud. Each time I would rub my belly and tell my sweet Adelina that she was going to be born early. But, I would say, there will be doctors and nurses there and mommy and daddy will be there. And they will give you the best care possible and we love you so much.

I do feel that the mind-body connection is real, and I feel that this is partly why Adelina (for the most part) is a very calm child. She did not end up going to the NICU, and was born at 5 pounds 6 ounces and 18.5 inches long on October 31st. Her dad watched her come out and cooeed to her as she was cleaned and then blanketed and put on my chest. She was crying but stopped when she heard my voice trying to soothe her. A few minutes later, once I was rolled out of the OR, she was given to me again to breastfeed, and to my relief we had no issues there either. I tried to prepare myself for possible issues and told myself not to be too hard on myself if I couldn’t produce milk or figure out latching. But, I really hoped this wouldn’t happen because with Alyssa, even though my breastmilk leaked a few days later, I never got the chance to feed her.

Fast forward to almost two years later, and we are about to celebrate my rainbows second birthday.

Her first birthday I dressed her up as a unicorn and made the theme for her party rainbows and unicorns. We did not have a big party as I knew that birthdays with a rainbow are also pretty emotional, and again I did not want to put too much pressure on myself. This year we will have a bigger party, Nemo and Dory themed since these are her favorite characters. Nemo will be her Halloween costume. I’m excited to see her face light up on her actual birthday, and then at her party a few days later with all the decorations. I hope she has lots of fun and is happy.

When we ask her how old she will be on her birthday, she says, “Nemo, Halloween.” She’s so excited about being Nemo, although she doesn’t fully understand what Halloween is. One day when she’s older she may not like the fact that her birthday falls on this fun fall holiday, but for me this date will always have a special meaning that only my family and I can ever understand. Halloween has once again become my favorite holiday thanks to my precious rainbow baby, who came into my life and has given me so much joy. 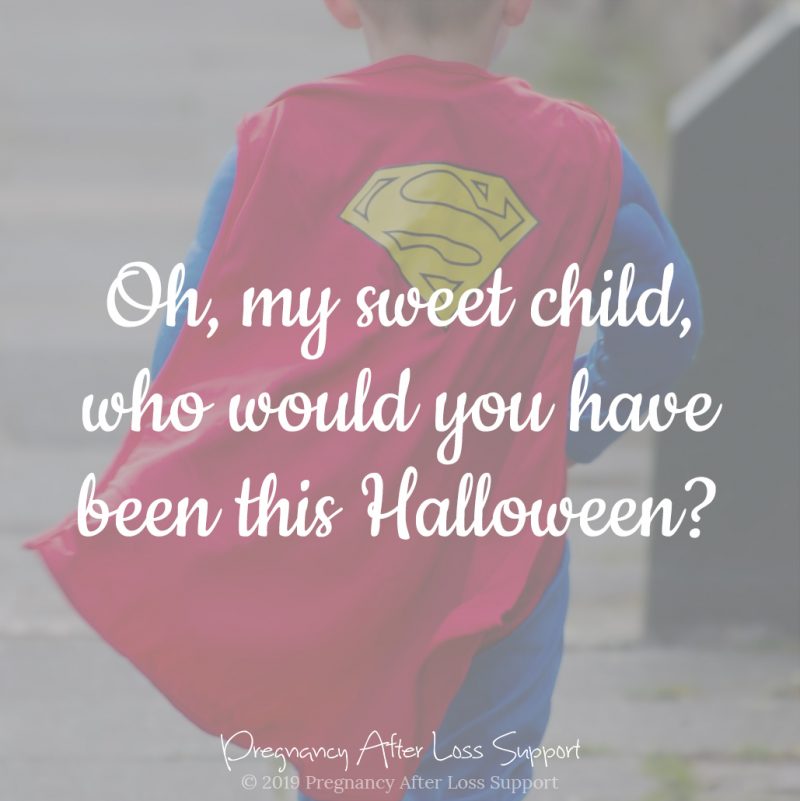 Alyssa will always be missing for the celebrations, but I know she’s happy that once again I’m looking forward to all things Halloween.

About the Author: Melissa Ayala