What’s in a Name? Stories Behind Rainbow Baby Names 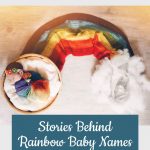 What’s in a name? A lot actually, especially in the world of pregnancy after loss. When I was pregnant with my rainbow baby (a baby born after another baby that has died), I wanted the name of my second child to have meaning. I had worked so hard to get that baby here and I wanted her name to symbolize that work and the hope I had to hold in order to get through the emotional journey of my pregnancy after a loss (PAL). 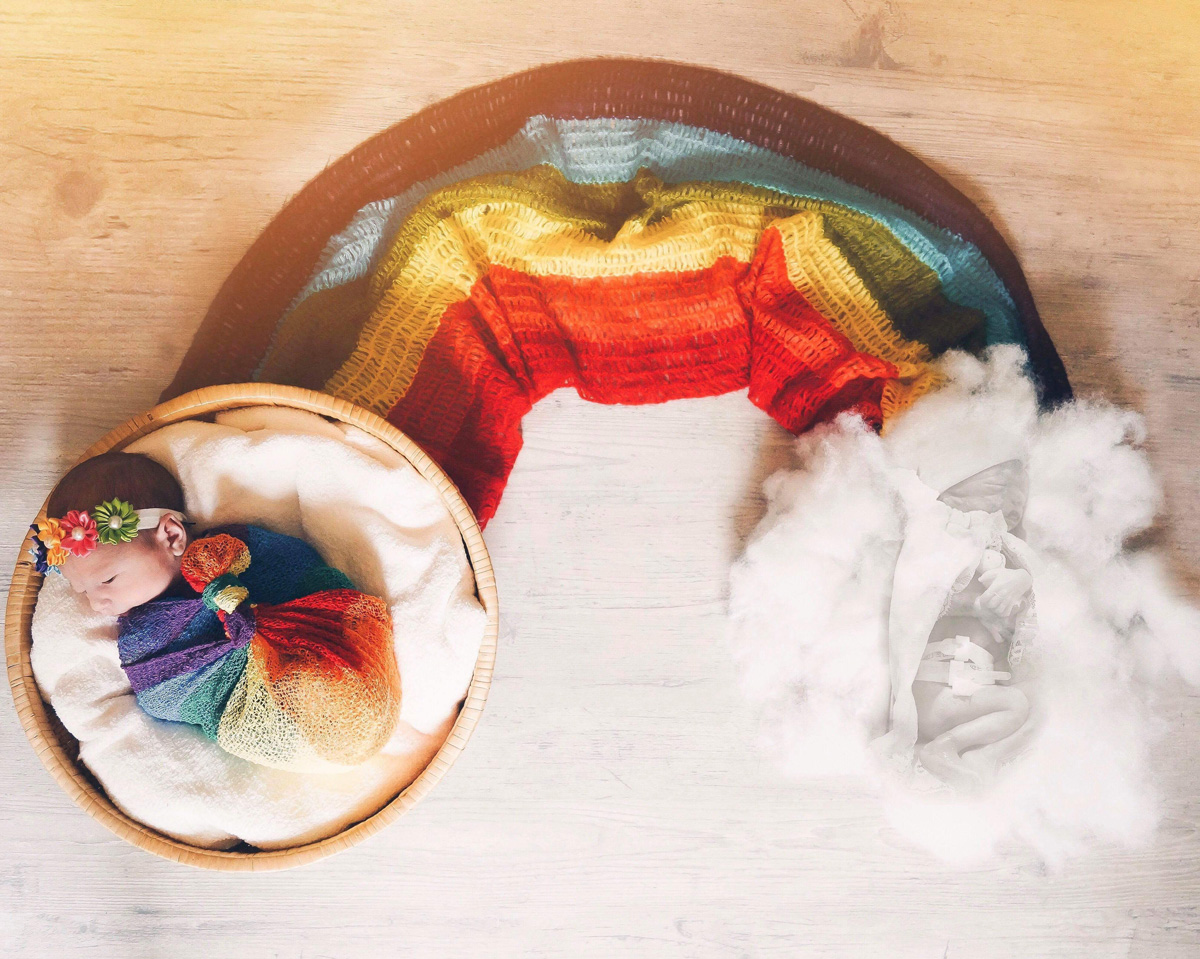 Our first daughter was named Nora and she was stillborn. Our second baby was also a girl and I had thought of using Nora as her middle name, but then thought I wanted this baby to have a different identity than her sister. After all she wasn’t a replacement she was the rainbow after the storm. Some feel different and that is okay. But in the end I did choose a name for my second daughter that was linked to her sister, but not directly. We named her Zoe, which means life. I wanted nothing more in my second pregnancy than to birth life instead of death like I had with her Nora. Zoe’s name was like a silent mantra my husband and I spoke to each other as if we were invoking hope for a living baby after the losing our first.

So, what’s in a rainbow baby’s name? We asked our fellow PAL moms and this is what they had to say about choosing their rainbow baby names.

A Promise of Life

Athanasios
“Athanasios means immortal and I pledged that ‘this one will live forever.’”

Evelyn
“Evelyn means “life,” she was conceived eight weeks after her sleeping sister’s birth and born the same year only eleven months apart.”

Vianne
“It’s french and means ‘vibrant’ and ‘full of life’.”

Caroline
“I chose Caroline because it literally means “song of life” and that’s exactly what she was to me!”

A Light in the Darkness

Lucas
“Lucas means light because he brought light to the darkness of our lives mourning his sister.”

Dawn
“Dawn signified to us that she is a new baby, a new story. But also connects to her big brother’s name, our baby that died, who was Lucian, which means ‘man of light’.

Poppy
“The name symbolizes a flower/thing of beauty that can emerge/grow out of desolated/ravaged places.”

Colton
“It means, ‘from a cola town or dark town,’ and we always called the previous year after our loss the darkest year of our lives. He is our little light and helped me get out of the dark place and begin to heal.”

A Gift From God

Sarah
“Sarah is Abraham’s wife in the Bible. Sarah wanted so badly to have a baby and couldn’t but when she was old God blessed her with a King for a baby son.”

Elysia
“Elysia means home of the blessed. After our son Ethan died we were diagnosed with secondary infertility due to my health complications. So when we got pregnant with our rainbow we felt like we were so blessed.” 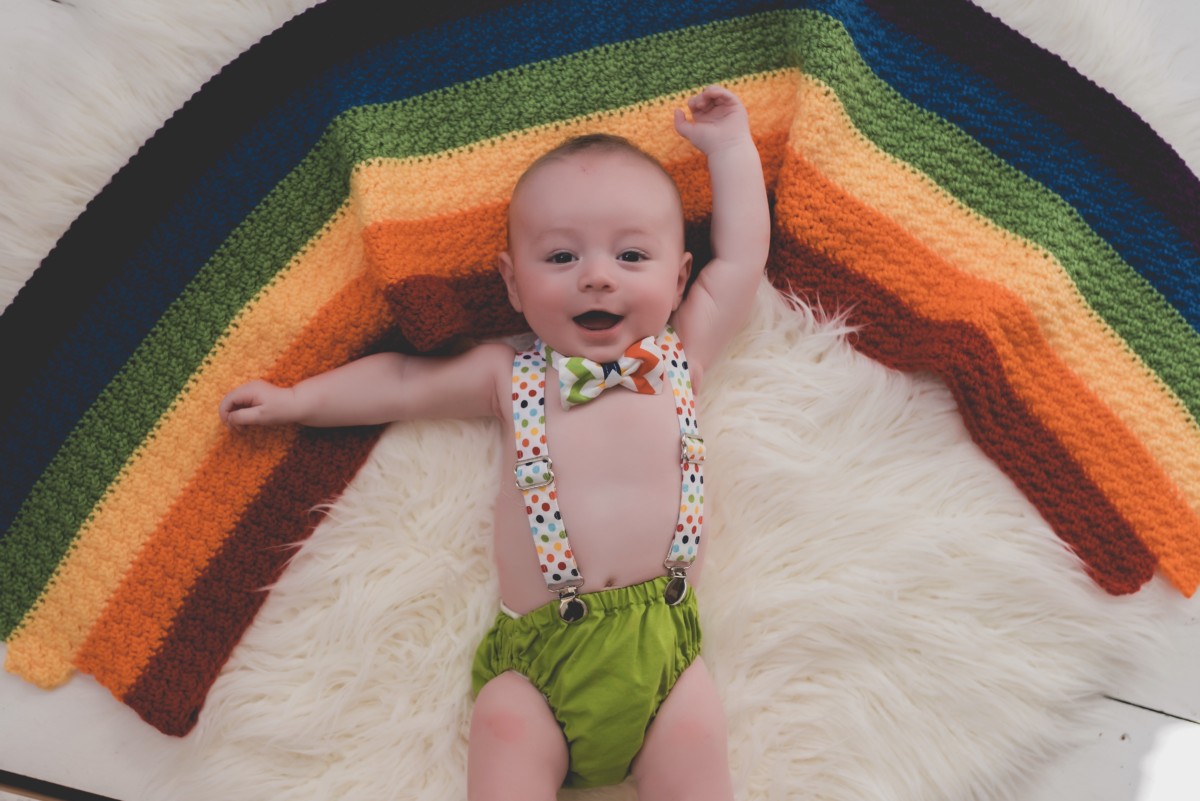 A Belief in Happiness

Joy
“We choose Joy for our rainbow’s middle name because we knew how much happiness she was going to bring us and she absolutely has. Joy was the most perfect word.”

Isaac
“Isaac means laughter because I hope his life brings us joy and laughter as we miss his sister.”

Felix & Patrick
“My first rainbow is named Felix, which means lucky. Simply because we feel so lucky to have him. My second rainbow is named Flynn Patrick. Patrick is a traditional leprechaun name – because he is our little pot of gold.”

In Remembrance for the Child that Came Before

Eilah
“It’s the Hebrew/Irish spelling which means oak tree. Besides the obvious strength of an oak tree meaning, in the Jewish culture one plants a tree for Shiva in remembrance of one(s) lost.

Clara Drew
“Our rainbow’s name is Clara Drew. Her middle name is in honor of her big brother in heaven, Andrew.”

Elliott Alexandria
“Our rainbow little girl is Elliot Alexandria, our angel is Emma Alexandria. I wanted them to have the same initials and the same middle name because that was something her sister could pass to her.”

Jaron
“My rainbow was born after we lost our daughter, to complications from a placental abruption and had two early losses shortly afterwards. When we found out I was pregnant again, my prayer was that my baby would be born screaming. We chose Jaron for his name because it means to cry out and rejoice in Hebrew. (I had a c-section and he was screaming as soon as his head was out!)

The Promise of a Rainbow

Iris & Serenity
“Iris Serenity is our rainbow’s name. Iris is the goddess of the rainbow, who took messages between the gods and mortals on her rainbows. It seemed perfect. And Serenity because to me, serenity is the inner calm we find in the face of adversity. We need that. A lot. And I hope it prepares her for her own life as well: a reminder that she can have strength and peace regardless of whatever challenges get thrown her way.”

Noah & Matthew
“Our rainbow is Noah Matthew. God sent a rainbow to Noah as a promise that he would not send another storm, and Matthew means, ‘Gift from God.’ He is our rainbow gift from God.

Beau
“Not for ‘rainbow’ actually (which I oddly didn’t even connect at the time) but for “beauty” from ashes.”

An Acknowledgement of Courage & Strength

Harvey
“It means, ‘battle worthy’. We most definitely battled to have him after losing our daughter full term and another two losses and complications with me as a result. He is worth every battle and more.”

Leona
“Leona means lion. When her big brother was in the NICU, a lion became his unofficial mascot. They’re symbols of courage and bravery. So we gave her a middle name to honor and remember him.

A Belief in Possibility

Hope
“We used Hope as she is our hope for the future.”

A Place to Heal

Preston & Conway
“We named both my sons after places that made us feel at peace after our loss.”

A Reminder in Daily Life

Cadence
“Our stillborn daughter’s name is Cadence as we wanted a first name that was a name but also a word that you could hear in normal life too. I love that I can hear someone use the word cadence and think of my first daughter, I wanted the same for our second daughter so we gave her the middle of of Cadence.”

Colbie
“During my pregnancy with my rainbow my husband and I couldn’t agree on any names. However, one evening we were driving back home after visiting family and casually discussing baby names when we drove past the hospital where we said our final goodbyes to our angel, Amelia. When talking about Amelia the song, “Bubbly” by Colbie Caillat come on the radio, which was my husband and I’s song when we were in high school. At that moment my husband suggested the name Colbie and it felt right. Like Amelia suggested it to us.”