TTC After Loss: The Negatives 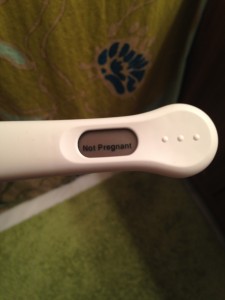 This title is ironic, of course.  Most things about TTC after a loss are negative, but nothing is worse than a negative pregnancy test.

Almost right after my last post, I got my period.  And I was so excited!  I had never been more excited for my period in my life.  I gained a renewed spirit.  Within two weeks time I was sure we would try, and be successful, again.

I monitored my fertility app like a crazed woman.  Almost everyday I checked it, even though its calculations of my fertile days never changed.  I was just so excited to get the chance to try again soon.

So I anxiously waited and counted down the days.  On the first day of my fertile window we tried again (read: S-E-X, people).  I planned to do what my doctor had advised, which was follow the “sex every other day” rule.  Well, as is accustomed in my job and life, two days later I was exhausted and the mere thought of TTC was exhausting.  I figured we could push it off one more day, I did have several more fertile days left anyway.

And then, I got the stomach flu.

Well, if anything kills the mood, nothing does it like running to the bathroom every half hour or having your husband watch you as you vomit uncontrollably into a trash can.  Mood sufficiently killed; not like I was really up for it anyway.

So, TTC this round pretty much came to a screeching halt.  I told myself that this was okay.  That it was a minor setback and we can try again when we’re in Ireland (my next fertile window just happens to fall during our trip in a few weeks!).  Maybe going to Ireland will be the magic trick, I thought, maybe we’ll come back with a  very special souvenir.

So I told myself to NOT get my hopes up.  It wasn’t like we really had a chance anyway.  One session between the sheets does not a baby make (unless you’re on Teen Mom).

But then…I started to feel what I thought were pregnancy symptoms.  The first being my sense of smell has been insane since I’ve been sick, as has my gag reflex.  I’ve been super nauseous on and off ever since I was sick.  Of course these are most likely due to having been sick, but I wanted to believe differently.

So I took a pregnancy test five days before my missed period, which was exactly what I did when we found out the first time we were pregnant.  I automatically assumed our second pregnancy would be exactly like our first (except hopefully without all the sad parts).  To try to help myself from feeling like I was slapped in the face when/if it came up “not pregnant” I chose to use one of the blue lined ones.  I thought it would ease the disappointment.

It did not.  Almost right away the line was immediately telling me “not pregnant” but I stared at it for several minutes hoping, begging, and wishing that it would give me even the faintest positive lines.  Nope.

So I did another one the next day.  It was too early, I said to myself, plus I miscounted and it wasn’t actually five days before my period…silly me!

I wasn’t pregnant, and so for a few more days I convinced myself.  I would just wait until my period showed up, on time, just like usual.  I was starting to get PMS symptoms anyway, though they also kind of felt like symptoms I had when I was pregnant.

This all becomes more confusing when you are TTC after loss.  Every twinge and ache could be a pregnancy or could be the natural process of menstruation.  Lack of the symptoms you had with your pregnancy loss make you think you aren’t pregnant, though perhaps you are because no two pregnancies are the same.

Yesterday, I took one more test.  My period is due today, and I felt so horrible last night that I thought I had to be pregnant (I was very close to throwing up and I don’t throw up unless I am extremely ill).  The result of that test is the picture above.  Digital pregnancy tests are such a Punch. To. The. Gut.

I’m still waiting for my period to start, but I don’t necessarily consider myself late.  Most likely my period is out of whack from having a miscarriage.  I will probably get it tomorrow and have my last hope, dream, and wish dashed for this round.

Until next time I will just have to live with the hope that I get to bring home a little leprechaun from Ireland.

About the Author: Kristi Fritsch-Churan

Kristi is full-time existentialist trying to find her way in this crazy world and navigate this thing called "pregnancy loss". Having lost her first niece to stillbirth over two years ago, she is no stranger to the world of baby and pregnancy loss. More recently she was initiated into this community through her own miscarriage at almost 11 weeks. In her spare time, between grieving and finding meaning as a human, Kristi enjoys teaching middle schoolers (most of the time), painting, sewing, and saying she does yoga (though she needs to get back on that horse soon). She is married to a wonderful man, Zach, who supports her in all her eccentricities and whims. While she currently has no human children, she is the mother to two stupid dogs who give her lots of kisses and cuddles to help her as she wades through the tide of pregnancy loss and trying to conceive again.