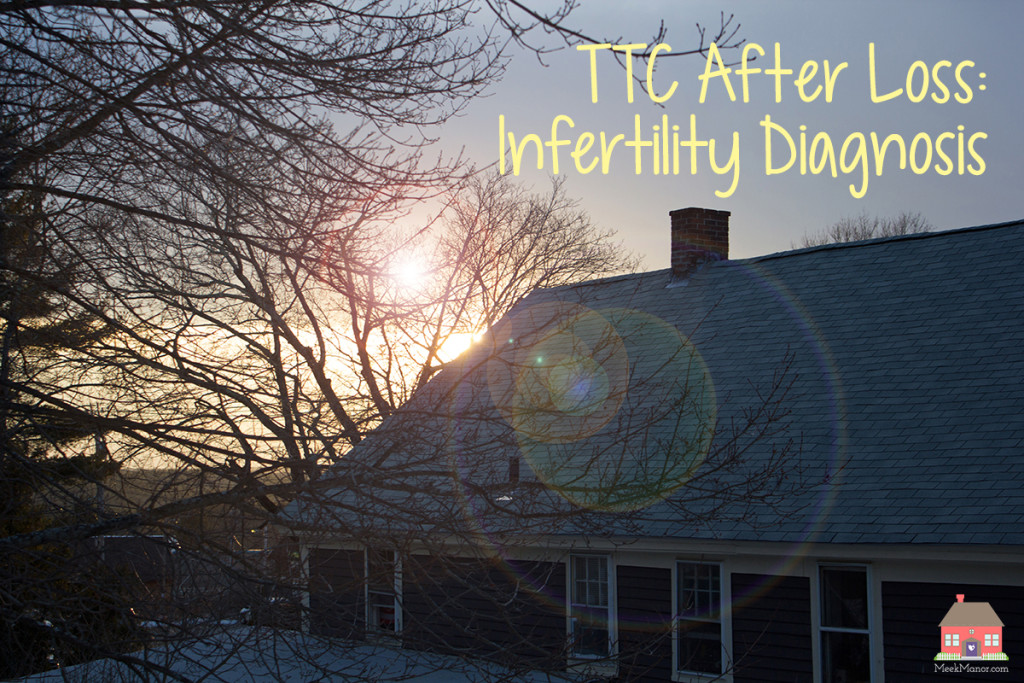 After a stillbirth, many aspects of the process feel particularly cruel: determining final arrangements for the baby, leaving the hospital with empty arms, postpartum realities like milk production and other body/hormonal changes, holidays, and many more. Twelve months after losing Patrick, we were addressing another cruel reality of our lives after loss: infertility.

We waited two months for an appointment with my OB/GYN to get a referral to a Reproductive Endocrinologist (RE). It was encouraging to see her and a reminder of why we’ve decided not to switch doctors for our subsequent pregnancy. She gave us a referral to her favorite RE, did some initial blood work that she knew the RE would need, and said, “I’ll see you soon.” She is always so hopeful and reassuring. Amazingly, we were able to get an appointment with the RE for two days later.

I was nervous about our appointment, and we got lost in the hospital, which meant we were late. By the time we sat down with the doctor, I was an anxious mess. But she put us at ease immediately. Even though we’d made our appointment just days earlier, she was so prepared and knew our history. She called Patrick by name and was empathetic and kind.

We talked about the potential causes of our infertility and made a plan for testing. She was concerned that I may have a blood clotting disorder that could have contributed to Patrick’s death, and I wasn’t quite sure what to do with that information. On the one hand, it would be nice to have an answer and something to “fix.” On the other hand, could we have avoided Patrick’s death by seeking treatment while trying to conceive him? I tried to set it aside and wait for answers.

We did some of the testing over the next week, but some needed to wait until specific times in my cycle. Since my cycles have been fairly regular, we scheduled a Hysterosalpingogram (HSG) for April 3rd, the day after Patrick’s first birthday. It felt so odd, such conflicting emotions, to be planning his birthday celebration and fertility testing for the same week.

As it turned out, though, the stress of the month messed with my cycle, and we had to reschedule the HSG, as well as our follow-up with our RE. I was absolutely wiped after Patrick’s birthday celebration (which you can read about here, here, and here), so it was probably just as well that my cycle didn’t cooperate.

My HSG showed no blockages in my fallopian tubes or uterus, and while that was encouraging, the doctor and several nurses reinforced that we should have sex several times in the days following the HSG, because it’s been known to be just enough for some couples to be able to conceive. Well, that was an awful lot of pressure for me, and probably Lloyd too. Due to that pressure, it was completely ineffective advice.

At our follow-up with the RE, we found out that we’re one of the many couples with “unexplained infertility.” Because of our age, we were able to skip several of the initial treatment steps, and our doctor recommended that we try FSH injections with a trigger shot (HCG) and Intrauterine Insemination (IUI). We planned to try two cycles of IUI, then we would meet with the doctor again and discuss In Vitro Fertilization (IVF).

We are very fortunate to live in a state where infertility treatment is covered by insurance. Treatment would probably not have been possible for us otherwise. Unfortunately, my husband is a contract employee without employer health insurance, so we purchase our health insurance through our state exchange, which has been riddled with problems. A significant part of my stress through this process has been acquiring health insurance. We went through the entire process of testing being assured by the state exchange that they would resolve the problem, but it continued to be an issue. Even thought we’d finally made a plan for treatment, we were still stuck in limbo, waiting for preauthorization, one more cruel hurdle to overcome.

We left the doctor’s office somewhat hopeful, but also frustrated. Bless my husband for knowing how to make me laugh. When we got home, he asked for his test results sheet that the doctor printed for him. He promptly put it on the refrigerator, a silly reminder that his sperm were just fine. It’s still on our refrigerator, and it makes me laugh every time I see it. With no discernible issues, we tried to continue to hold on to hope while also continuing to wait.