The Unspoken Grief from a Loss Father 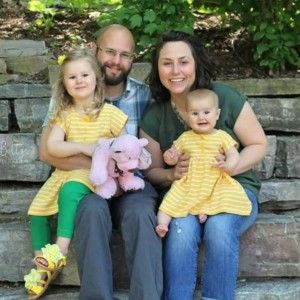 Our family of five, including the bear we received from the hospital after losing Lucy.

My wife, Meagan — a volunteer with Pregnancy After Loss Support (PALS), asked if I’d like to write some thoughts about our experience for PALS; from a father’s perspective. I’d love to, I thought. However, I’ve never spoken or written more than about 25 words about it, so that makes me pretty nervous. Here are a few thoughts that represent what’s come to mind, as jumbled and non-coherent as they may be.

The guilt of not remembering

I feel guilty every year because I don’t remember the birthday of our daughter who was born still; don’t remember when Meagan went in into deliver her (it was Father’s Day weekend that year). It’s not to say I don’t think about it, or it didn’t affect me; I just don’t have the innate remembrance that Meagan does every year. Maybe it’s because she’s more observant than me, maybe because of how the loss touched her emotionally and physically in ways that it didn’t for me.

When the loss became real

I remember getting the call from Meagan when she was at the doctor. I knew instantly from her voice. I was with our oldest daughter, who I immediately rushed to daycare and rushed off to see Meagan.

I don’t remember taking her to the hospital to deliver. The next memory I have was there in the hospital, while at a loss for words, reaching for a pamphlet about loss, written by a dad. He suggested giving the baby a name, and that’s the point that everything that was happening became real for me. In the shock of everything happening, choosing a name didn’t occur to us. Through tears, we chose Lucy.

I remember us choosing the epidural, which, for our first baby, was a difficult decision given our desire to deliver unmedicated. This time around, we didn’t give it a second thought. Let’s just get this over with.

The next thing I read in the pamphlet is that you should consider seeing the baby and holding the baby. I think without reading that that we would not have done that. I wouldn’t have, anyway. In the end, we’re glad that we did. It brought us peace in that moment. We held her and talked to her and said goodbye.

Through it all, I resisted the tears so I could be there for Meagan (even though she was there for me more than she knows). I know that doesn’t have to be my role, it’s just how I was. That all ended when they took Meagan away for about an hour for another procedure. I spent that hour in a state of release, alone, crying.

Not finding the way to show grief

I know Meagan has wondered over the years why I haven’t grieved or talked about it. Those are good questions, and she’s right. I should talk about it, acknowledge it more, outwardly anyway. I certainly have grieved, thought about it, remembered it, but I’ve just internalized it and I don’t have a good answer why that is.

One thing I barely remember is our pregnancy after the loss. It was all a blur, with fewer elated emotions. We were just getting from one step to the next. That’s one thing a loss does, it changes all emotions with the following pregnancies. All of the milestones that would normally bring joy bring more relief than anything.

Finding a community of loss and grief

The experiences of going through the loss of Lucy and then the subsequent pregnancy were just more difficult than I could image, even more so for Meagan. She handled everything, by the way, with the grace and command that she handles everything. And who got me through the grief more than she realizes.

But in an odd way, I’m somewhat grateful. I now have a glimpse into the experiences of other families going through similar heartache, and I can now provide some sense of community, however small, with those families. I now understand that miscarriages and losses are not as insignificant as they’re sometimes portrayed by families, and not as insignificant as society wants them to be. And like me, fathers are generally even less apt to talk about it. Not that they need to, but I can play a role in bringing an understanding, a listening ear, and giving them the space to know that what they went through was significant–that it can get better, and it’s ok to grieve. No one should feel a responsibility to minimize what they have gone through.

Through Meagan, I’ve come to learn about PALS and am thankful for the support it provides to us and other families. It fills a definite void in understanding of loss and the complicated emotions of subsequent pregnancies.

Sergio Pierluissi is the partner to our social media coordinator, Meagan. He’s the father to two feisty living girls, Ruthie and Sage, while missing little Lucy who is gone too soon. He’s a biologist, an advocate and adoring father.