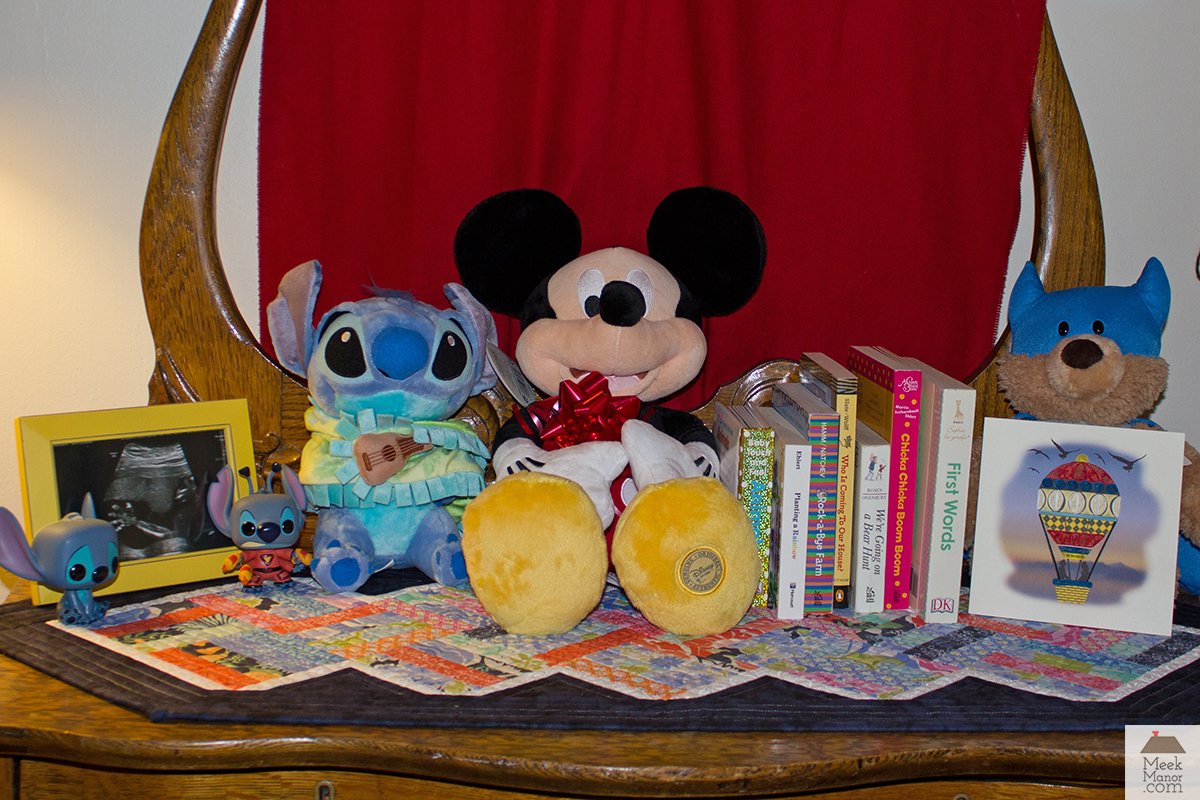 I’ve been trying to write this month’s piece for days now. The topic came to me a few weeks ago, and I was excited to write about it. I felt like I had conquered some of my fear and was looking hopefully forward to the New Year with all of its possibilities, as well as feeling confident about bringing our baby, Stitch, home. But, when I sat down to write the piece, I realized that excitement had disappeared. In its place was dread, and I couldn’t pinpoint why. I stared at the screen, with only the title typed at the top.

We’ll be 28 weeks on New Year’s Eve. Even though we have an ultrasound and OB appointment scheduled that afternoon, I ended up in the OB clinic Monday afternoon because I’d felt off for several days—exhaustion, shortness of breath, pain and tingling in my hands. I saw one of the other OBs in the practice, and she said it was hard to pinpoint one particular thing with those symptoms. My blood pressure was elevated, but no more than it had been at my last appointment. The OB decided to run some labs to make sure everything still looked normal, and then she asked when I was seeing my therapist next. She suspected that the culprit was anxiety that was exacerbating typical pregnancy symptoms.

On the one hand, I was relieved. Stitch’s heartbeat was perfect and I continue to feel lots of movement. So, baby seems to be fine. And I’m probably fine too—not headed for pre-term labor, preeclampsia, or gestational diabetes. On the other hand, I felt defeated. I’ve been working so hard through this pregnancy to attack my anxiety, own it when it visits, and use skills I’ve learned through therapy to cope. I found myself in a place where I hadn’t confronted the anxiety; I’d pushed it under the surface, internalized it, and let it affect me physically. I felt like I was failing the baby and me.

Even armed with that information, I still wasn’t sure what was causing the anxiety. The OB suggested it was probably Christmas. It could be. I’m sure the emotions of our second Christmas without Patrick and being pregnant after loss contributed to the anxiety, but I still didn’t feel that Christmas was the main culprit. No, I think the main culprit is an internal battle over the nesting instinct.

I’ve been battling the urges to nest for about a month now. I get the urge to start a project or organize an area of the house to make room for baby things, and then I panic, somewhat irrationally, wondering if I’m jinxing Stitch’s health and well-being. But, when I try to push the nesting instinct away, that causes panic as well: I feel like I’m letting Stitch down by not preparing.

This cycle of nesting panic became very clear a few weeks before Christmas. My husband and I decided it was time to order some of our big-ticket necessities for Stitch’s arrival—the Arms Reach Co-Sleeper, the car seat, and the stroller. We had chosen them through research and registered for the items back in November and decided to order them online. Ordering these items was a giant step for us both. We knew we needed to do it, and the money was available to purchase those items, so we made the order. I had hoped that ordering them online would have less impact on my anxiety about purchasing them. We planned to put them in the attic as soon as they arrived. Out of sight, out of mind.

They arrived on a rainy day, and our neighbor offered to carry them up out of the rain for me. As soon as they were in the house, I lost it. I couldn’t stop sobbing. I kept apologizing to Stitch and saying, “This doesn’t mean you can die. This doesn’t mean you can die.” I’m not normally a superstitious person, but having those items in the house felt like I’d given Stitch a death sentence. But, had we not ordered the items, I’d be panicking about not doing that when we had the opportunity.

I decided to post about this internal battle on Facebook, and I received such wonderful support from friends and family. I walked away from that experience realizing that somehow I needed to nest on my own terms to keep the panic at bay. I tried to tackle little projects or break projects into smaller, more manageable pieces when I had the urge to nest. That way, I felt like I was making progress but wasn’t overdoing it. The afternoon the car seat, stroller, and co-sleeper arrived, I also picked out the last two fabrics I needed to start a new sewing project for Stitch—a car seat canopy. I think that’s about when I started to feel like I’d conquered this fear and was excited for the New Year. Instead, I wonder if I pushed it all below the surface to internalize instead. Apparently, forcing yourself to be excited and stifling the fear isn’t overly effective.

Since the arrival of the co-sleeper, car seat, and stroller, I’ve also cleared out a dresser for Stitch. I broke it into several steps: clear off the top of the dresser; clear out the drawers; have my husband fix the broken drawers; move some of Stitch’s collectable items to the top of the dresser; and fill the drawers with items we’ve accumulated for Stitch. I did this over two weeks, finishing it the day after Christmas as I was sorting through all of our presents and finding homes for them. I hadn’t anticipated that Stitch would receive so many gifts as well! It was sweet and exciting, but also a reminder that so many people are hopeful for this precious little one. Maybe Christmas was part of the culprit after all.

Clearly, I don’t have this all figured out. Pregnancy after loss is a balancing act. We mamas have experience backing our fear. That fear can fuel battles with our instincts and urges as pregnant women. Panic can appear from either side of the balance beam. I’m realizing that we can’t completely conquer the fear and win this battle. No, we must just balance ourselves between the two and try not to fall. And when we inevitably fall, we must get back up and keep on balancing.