Editor’s Note: We at Pregnancy After Loss Support (PALS) know that we serve many moms from diverse backgrounds and experiences. The following is one mom’s experience after the results of last week’s presidential election. This article may not resonate with you, and that is ok, but we will not tolerate any shaming or judgmental language in response to this piece. PALS is a safe place for moms who have terminated for medical reasons. ~Valerie Meek, Operations Director at Pregnancy After Loss Support 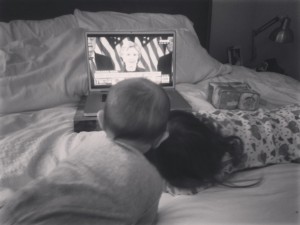 On a warm November morning, I took my two living children—daughters—to the elementary school down the road to cast my vote for the next president of the United States. I felt such a sense of pride as we strode there as a trio, so confident I would be able to tell them that we had finally elected our first female leader, and grounded in a sense of relief that they would never have to question whether or not a woman could be president. In the selfie I snapped of us afterward, our smiles are empowered, the sky clear and bright above us, so much promise on a near horizon.

By the time I finally closed my eyes that night, I felt shock in the numbers of people who would elect a sexual predator with no experience rather than a qualified female. I felt the cresting of the wave of misogyny that has been building this entire election, alongside the bigotry and xenophobia President-elect Donald J. Trump has stoked in his supporters. And, quite honestly, I felt grief—over the rights and justices I have known my entire life that now have a very real chance of being taken away from my daughters. Indeed, there was a collective mourning last week amongst those of us who felt betrayed. We have lost ever so much more than our candidate’s election.

It’s a profound grief, and one I haven’t felt since losing my first two pregnancies. While not in any way equal, the last time I felt such a lack of control over the course of my life, I was 23 weeks pregnant. I was told my son was missing half his heart and had no visible aorta. That outside of my body he would soon die. That the measures to try to prolong his life were extreme, painful to him, and unlikely to guarantee his survival. Five months later, I was told the subsequent heartbeat we’d heard at six weeks had stopped by ten. Ultimately, I couldn’t protect my children.

One of the first lessons of parenthood, however it comes, is that so much is beyond our control: if we conceive when we try, if our babies grow healthy and strong, if any number of calamities doesn’t befall them once they are “safely” in our arms. I consider the election of Trump a calamity for our country and all its children. I might say “politics aside” here, but I don’t think that’s possible this time around. I think it’s one of our most political times, when our bodies and decisions are at the mercy of those in power, and the nation has just elected a man who has perpetuated and enticed hateful attitudes and actions toward women, African Americans, Muslims, Hispanics, the LGBTQ community, and, sadly, the list goes on.

I’m on the list in more ways than one. First, I am a woman. Second, I am a mother who along with my husband, made a choice for our first child and his catastrophically sick heart. We made a compassionate, medically advised choice, and as his parents we are the only ones who were entitled to do so.

When I cast my vote, I didn’t just stand with the first female candidate to top the presidential ticket, I also voted for the only presidential candidate who validated our story on a national stage. At the final presidential debate, Secretary Clinton said:

“The kinds of cases that fall at the end of pregnancy are often the most heartbreaking, painful decisions for families to make. I have met with women who toward the end of their pregnancy get the worst news one could get, that their health is in jeopardy if they continue to carry to term or that something terrible has happened or just been discovered about the pregnancy. I do not think the United States government should be stepping in and making those most personal of decisions.”

Her understanding and nuance is rarely possessed, much less articulated, by politicians when they speak about abortion—and terminations occurring after 20 weeks in particular. (There is a 20-week abortion ban now in place in 14 states that renders medical choices like mine impossible given when these types of diagnoses typically occur during pregnancy.) Clinton understood the real issue, the real heartache. I felt seen when I am most typically shamed by those in power. In response, Trump spoke graphic, appalling lies that show an absence of medical or legal understanding of why, when, or how these choices are made. I delivered my son. I held him. He never knew pain. Trump’s “scare rhetoric,” as Clinton put it, and his inability to accurately defend his stance on the issue did a disservice to both the pro-choice and pro-life movements.

This election cycle has proven the real and dangerous effects of rhetoric. For me, it has meant a constant offense and defense of reproductive rights and incessant reminders that threaten the sense of peace I try to hold onto on any given day. A mass shooting occurred at a Planned Parenthood, triggering a new wave of anxiety. Our new leader said women should be punished for obtaining abortions, and later only clarified that doctors should be punished. And, now, that we as women should “have to go to another state” to seek reproductive health care. His Vice President-elect has worked hard at the federal and state levels to restrict access to safe and legal abortion. I’ve internalized the words and the actions. I have wondered if I should be sharing our story at all, a sad admission of the cost of vulnerability when sharing has been such a source of healing and connection these last four years.

Like many marginalized groups this week, I fear I no longer have safe passage. But that doesn’t mean I won’t move forward, speak up, and remind my daughters at every turn of what Clinton did in her concession speech, to “never doubt that you are valuable and powerful and deserving of every chance and opportunity in the world to pursue and achieve your own dreams.” I will never know the impact a female president would have had on my daughters’ early dreams—I won’t know until it happens. And it will. In the meantime, for the loss of that potential and the importance of our sons to see it as well, I grieve. Time slows, as it does. I awake each time in horror, until it challenges me to get up and demand better.