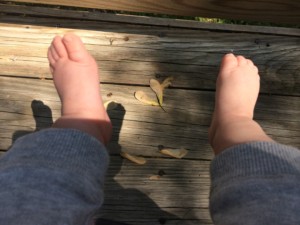 Five years on, here is something new in the grief: I need to go back to work. I have freelanced consistently over these years of losing and being pregnant again and, now, raising two young daughters. However, the last time I properly interviewed for a job, I was 30, a newlywed, an Innocent. Two years later, I was a loss mom. I’d already left my day job to prepare for the baby who never came home. So, I wrote. I cried and walked the dog and wrote. And tried to have another baby, then tried again. I was living in a foreign country at the time, and we could afford my grief. I remember thinking how poorly I would have performed at work. Those were the days I would take a plate out of the oven without an oven mitt on.

During a recent job interview with an early intervention program, the interviewer switched to speaking in Spanish, assuming my three years living in Chile had rendered me fluent. I answered her first question, jumbled the second, and by the third it was clear that my Spanish was not going to land me the job.

“But three years is a long time,” the interviewer said, her return to English a tacit acknowledgement that she had expected more of me.

“But two out of three of those years, I was grieving,” I’d wanted to say. It had made absorbing a new language nearly impossible. Many days, it was unbearable to carry a conversation even in my native tongue.

I wasn’t trying to hide my loss. The position required connecting families with resources, so my cover letter mentioned that I curate tools for the baby loss community. And I’d made my own membership clear. My losses had come up again during the interview when I was asked about my strengths. I said “empathy.” I said why.

I didn’t get the job, be it because of my most impressive Spanish or my openness about loss. My husband was surprised I’d revealed anything of our story in a job interview (most everyone at his office of three years has no idea). But that privacy is reflective of his own way of grieving. As all these years of public sharing and outreach indicate, that is not my way.

But as a future coworker, I must know if, when, and how to bring up my status as a loss parent. As an applicant, I have already grown used to not mentioning it at all, to glossing over what other advisors have told me is “too heavy.” The biggest part of me is not “professional” to include. We cannot legally be asked about our living children either. In the interest of fairness, all forms of motherhood are off the table for female applicants, even though the job I eventually secure will need to allow care for my children.

Yet, when I am asked to provide writing clips, as I was for a subsequent interview, some of my strongest publications (The New York Times, The Washington Post Magazine) concern the loss and legacy of my son. My website introduces me as a friend of the baby loss community. A quick Google search yields several pieces about TFMR. My résumé boasts that I am a monthly contributor to PALS. My writing is better because I have processed my grief on the page. It is also written from the margins. It is also political. While I wouldn’t want to work for a company that wouldn’t hire me because of these truths, I also need to help support my family. This form of “work/life balance” is a part of the grief I hadn’t anticipated.

I know a new loss mom, a mere three months out from finding her baby daughter lifeless in her crib. She still can’t bring herself to return to work and feels like no one understands, that everyone is waiting impatiently for her “to be back,” a term we know no longer really applies. I understand why she can’t. I also understand that it’s a privilege to grieve outside a workplace. Having taken time for our health and healing, this mom and I and all those like us, may have a résumé gap to explain: the grief gap. This new loss mama may be asked why she left her previous job, if it comes to that. What does she say? What does she leave out? And what does all of that say about our culture, that the hardest work we may have ever done—surviving our children—is best kept to ourselves.

How have other PALS mamas handled this situation? What have you learned by returning to work after mourning or searching for a new job altogether?