I can’t believe that Rigby is already ten weeks old.  Ten weeks.  I feel like I was just screaming him into this world, on our bedroom floor with my completely shocked husband at my feet catching our son because our midwives were in a frantic race to get to us. 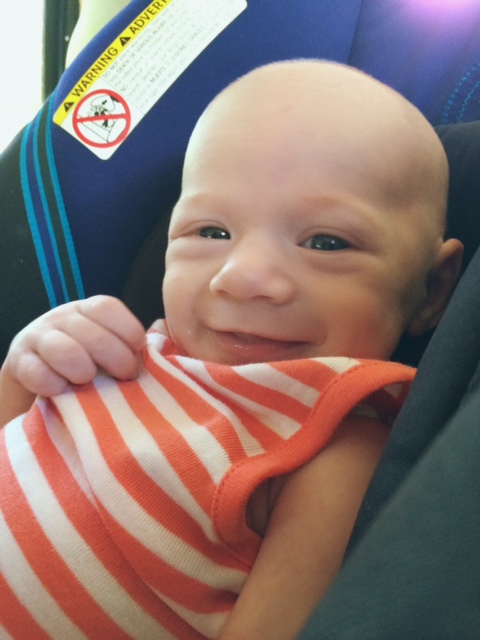 Those first few days after he was born, I was on that new baby high, floating far above my worries and all the pain it took to get to where we were.  Everything had a rosy hue, alit from behind and shining like a sunbeam.  Rigby lit up our lives and we were so elated he was finally out and here in our arms.  But once the high wore off and I came down from my postpartum baby bliss vacation, a well-known emotion bubbled up in it’s place:  fear.

I thought the fear would at least morph, evolve into that typical fear that all parents deal with.  A healthy fear, they call it.  This wasn’t that, it wasn’t like the “healthy fear” that accompanies parenthood.  I was legitimately scared for his life.  I thought he would stop breathing, so I watched him at night.  I wasn’t fully asleep or fully awake those first few weeks, and some nights under the cover of that darkness and in that altered sense of reality between sleep and wakefulness, I would think his chest wasn’t rising and falling.  My heart would stop, quite literally.  I would grab him and his little body would shake, those still fresh autonomic nervous system responses jumping to attention.  Then he would rouse and want to nurse, obviously, because he had just been jolted awake by his insane mother.

My babymoon with Rigby was so very different.  I wanted to enjoy him, and just celebrate his life and the gift he was to our family.  I did, there’s no doubt that I was enamored.  But that joy was masking the fear that would eventually poke holes in my sunshiny facade.  The thing I didn’t realize about having a baby after loss is that you’re afraid, for no good reason.  Yes, there’s good reason to have that healthy fear, but not the fear that I have.  I feel like he’ll be ripped from my arms at any moment.  That he’ll be gone and it’ll just end, this family of five.  No one tells you that the fear won’t go away.

I thought that once Rigby was here and alive and I was nursing him in my sling, I would be better.  Healed.  Whole again.  That’s not true.  I’ve got the residuals of our loss on my coattails:  fear, anger, grief.  They’re just a step behind me.  Some days I can keep them at bay, others I can’t.  Yesterday, I was in the kitchen and said out loud, “our baby died.”  Like I had forgotten, or my conscious self needed to remember so my subconscious spit it out without my permission.  I thought that once our “rainbow” was here, I wouldn’t have to feel the feelings associated with our lost baby.  But they still exist and they still wrestle with my heart and soul.  I want to just BE in these moments with Rigby, just love on him and explode inside when he smiles that huge smile.  I wish I could just extinguish those feelings of fear and sadness.  I can’t, and I’m mad that they won’t just go away.

Two months in, and I’m realizing that losing our baby at 20 weeks isn’t something that will ever be completely over.  It’s infinite, her life is infinite.  Part of me loves that, part of me hates it.  I don’t want to always be fearful of losing a life that I carried, but that makes the one we did lost live on forever.  There’s comfort in that, so maybe I’ll look at it like a soft sweater, or my favorite blanket.  Only when it’s hot out, you don’t want to wear a sweater.  I guess I’ll always be wearing that sweater, even in the desert, and I have to learn to love it then as well.

About the Author: Tricia Miller

Tricia Miller is the mother to four beautiful souls: three here with her, and one that shines with the sun and lives on in her heart. She loves on her three sons and is madly in love with her husband, Adam. Tricia welcomed their rainbow baby, Rigby Moses, on April 27th. He was born at home and delivered by his daddy because he was born a mere 81 minutes after Tricia’s first contraction. After closing her first blog, desperately seeking silence, she now writes the blog bohomamasoul. Tricia was also a contributor at Still Standing. She’s a SAHM that also has an Etsy store filled with vintage lovelies. You can find her on Instagram: @bohomamasoul, and Facebook: Tricia Lee Miller.