Life After Loss: Remembering a Baby Who Died by Performing Simple Acts of Kindness in his Memory 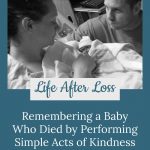 I remember the day like it was yesterday, despite being almost seven years ago. I had a weird feeling that something wasn’t right, but I continued to talk myself down from the “crazy tree” for three more days. Then on Thursday, July 10th, on my lunch break from work, I decided a visit to the doctor was necessary to just confirm my son Stinson was okay. I showed up at the doctor’s office and explained that I just wanted to hear his heartbeat. They were so kind, explained that this happened all the time and that no, I was not crazy.

That day will forever be etched in my mind–the day that at 27-weeks pregnant my son no longer had a heartbeat.

I was immediately grief-stricken, confused, angry, sad, and felt so utterly alone. I had heard of mothers losing children while in utero (that late in pregnancy), but that was decades ago. I had not heard of such a thing happening now. But, here I sat, with the emptiness that a “fetal demise” can cause. Those words stung. My husband and I wept, we hurt, we grieved, and the next day I delivered my three pound perfect baby boy. He was just born sleeping. 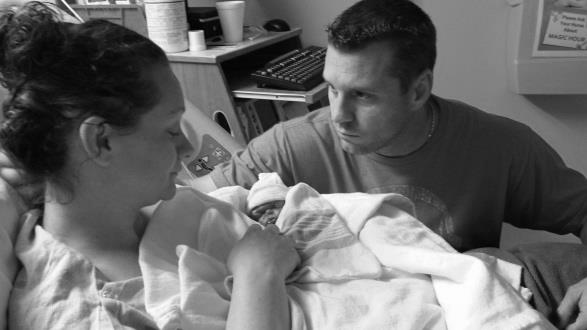 The follow-up doctor appointments were awful! Sitting in the waiting room for the doctor, seeing other moms glowing with pregnancy hormones. It was awful. I was happy for them but so so sad for me. I remember telling the doctor that I just felt like I needed to have a baby, a happy, healthy, alive baby. She confirmed that was normal, but also recommend I wait at least nine months (to let my body heal) to try to conceive, IF we decided to try to conceive another baby.

I can tell you exactly what day it happened, and how (insert smirk). My husband and I were enjoying the holidays and let’s just say we had a little “miscommunication” about when I would and would not be expecting to be ovulating. Needless to say, I got pregnant on Christmas Eve 2014, only five months after losing our sweet boy Stinson.

I was so confused at first. I had so many emotions about being pregnant I was not able to think straight.

I was happy, sad, anxious, nervous, excited, and scared. But most of all, and so hard to admit, I was disconnected. The hurt I felt from losing Stinson was so great that I unconsciously blocked myself from ever being hurt like that again.

I felt so disconnected, in fact, that I kept my pregnancy quiet without telling anyone but close family until after 16 weeks, when I was no longer able to physically hide it. I did not share on social media like I had the two previous times being pregnant. I didn’t even want to know the sex of the baby and had the ultrasound tech put it in an envelope in case my husband and I decided to change our mind down the road (which we did look at when he was 27 weeks–a boy). I felt like I wanted to be the mom I needed to be for this new life growing inside me. I was and I wasn’t at the same time. I let fear win through most of this pregnancy.

For as disconnected as I felt when my third son was growing inside me, I feel a special connection to him now, a connection that I cannot quite put into words. The nights I spent when he was just a baby, bawling, and rocking his warm body to sleep saved me.

During the pregnancy with him, I found myself celebrating and being happy, and would catch myself and felt necessary to grieve Stinson.

Thank God for my wonderful counselor that helped my husband and me get through this process. Because, that’s what pregnancy after loss is, a process–something that continually changes, grows, and develops. It catches you off guard, and emotions show up unannounced, A LOT. Our counselor was able to teach us that it was okay to feel all these emotions at the same time. It was okay to be happy and proud of the little baby growing inside me AND grieve the loss of Stinson at the same time. It was a profound moment, knowing it was okay to do both, that it was okay to move forward. I didn’t ever want to move “on” but forward, yes, I could move “forward.”

We welcomed Mitchell Ray into the world on September 6th, 2015. 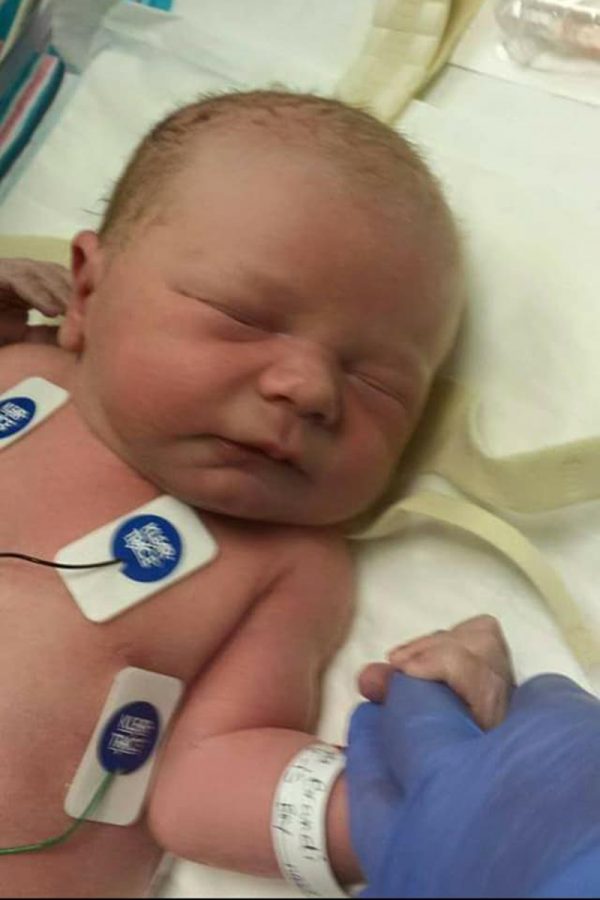 And, when he had to go from the delivery room to the NICU, my heart sank. He ended up having a collapsed lung that healed on its own. When a month later a beautiful “angel” birthmark showed up on his ribcage, I knew it was Stinson protecting his brother. 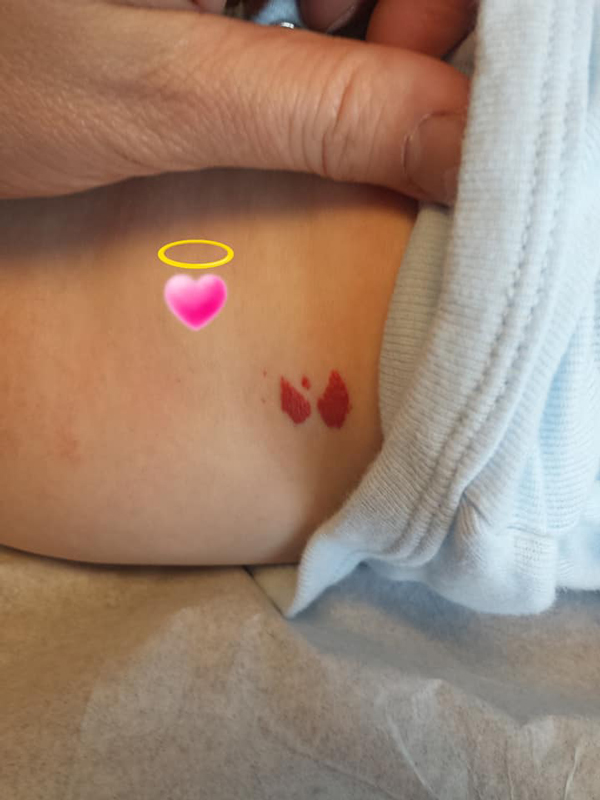 Moving forward is just what we did. We played with our 2 living sons. We celebrated Stinson’s birthday on July 11, 2014, by planting a butterfly garden and annually ordering butterflies and do a special butterfly release. We now spend July 11th as a family day with the six of us (my husband, myself, my oldest, my next oldest, and my twins! Yes, surprise twins in 2016. Another story for another time).

The most special thing to us, though, was spreading kindness.

After the loss of Stinson in 2014, we just felt so empty. My husband suggested we ask people to perform Simple Acts of Kindness (SAKs) in memory of him that year. On and around October 3rd, 2014, over 259 Simple Acts of Kindness were performed in honor of our sweet boy! We were so overwhelmed with pride for our sweet boy changing the world, even though he never took a breath. 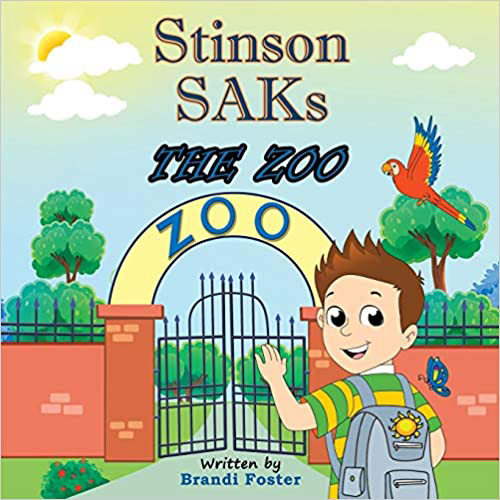 Stinson SAKs The Zoo – Available on Amazon* and Bookshop*

We celebrate him, his life, and all that he would have accomplished on this earth. We take family pictures with a yellow ball to represent him. We have a scholarship fund set up for when 2033 comes around we can gift someone a scholarship. We talk about him. We celebrate my oldest, the son born after him, and the twins that followed. I remind myself that even though he is not physically here with us, he is still here with us. He doesn’t get to miss out on all this craziness and chaos. He is part of Team Foster, forever and always.

*This post contains affiliate links. When you make a purchase using this link, you also support PALS without it costing anything extra for you — a total win-win!

About the Author: Brandi Foster

Brandi Foster is a married mom of 4 living children (3 boys and 1 girl), including a set of twins (boy/girl), and 1 son in heaven. She is creative, determined, and resourceful. She just published her first children’s book in a series Stinson SAKs The Zoo, in honor of Stinson. The book teaches kids to perform Simple Acts of Kindness (SAKs). In her free time-there is no free time (see previous info about having 4 kids!). She enjoys time with her family, crafts, board games, a little coffee with flavored creamer, drinking an ice-cold beer, and eating chicken wings. Find out more and follow Brandi on Facebook, Instagram, and TikTok. Learn more about her book series with this video.