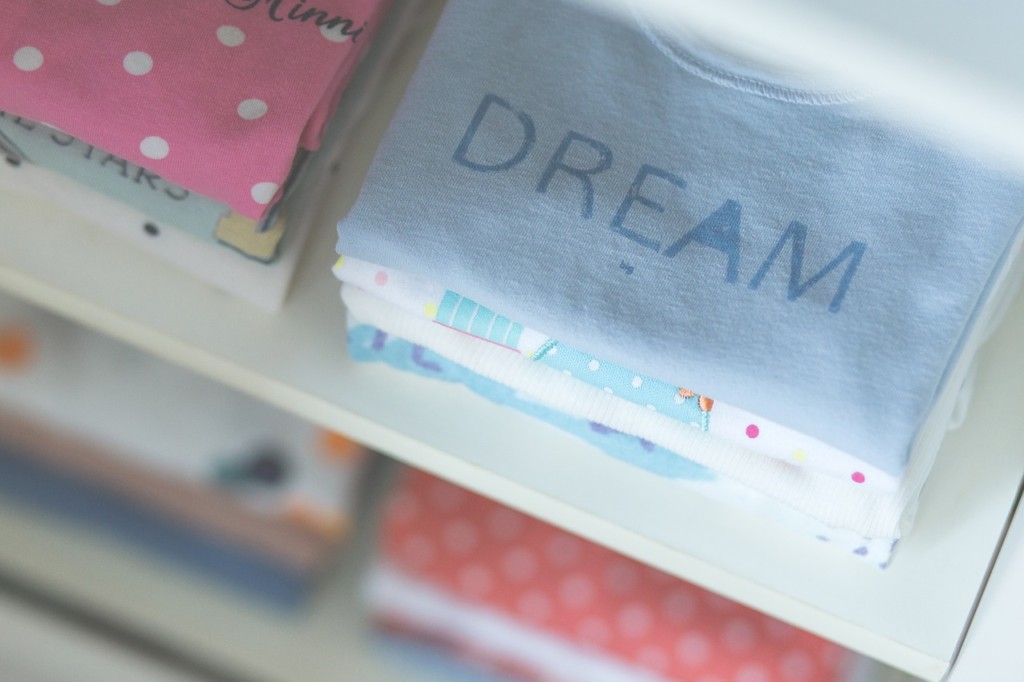 How different the baby department looks to a Mama who has experienced loss. Those soft pastels seem subdued and bright colors are jarring. Onesies covered with animals whose expressions are meant to be cheery, but instead just seem to mock you. How is it possible for a place filled with such tiny things to cast such a heavy shadow over you?

After my daughter, Dorothy, was stillborn I avoided the baby department. It hurt too much to walk by those racks of dresses and pajamas wondering how she would have looked in them and also wondering if I would ever have a need for such minuscule clothing in my life.

To be honest, I had given the baby section a wide berth even before Dorothy was born. I rarely shopped there when I had been pregnant with her. Dorothy was my third pregnancy in a year with the first two ending in early miscarriages. My entire pregnancy I felt guarded. I knew that loss could happen and I was always waiting for her to disappear like the others had. Because of that fear, I bought very little in preparation for her.

When I became pregnant with Frances, I expected to feel the same. I assumed that I would wait to the last possible second to buy what we needed to bring her safely home. All I needed was Frances, I didn’t need to shop.

But, I wanted to shop. When I entered a store, I no longer avoided the baby section. Instead, it pulled me in. Some force was beckoning me there and at first, I resisted. I would linger on the periphery peering in at the other families shopping for their babies, wanting to join them. The only thing keeping me from thumbing through the racks was the guilt I felt for wanting something so superficial. I was a loss Mama and I had more pressing matters than whether to buy the jammies with the bunnies or the kittens on them.

Then, one day I found myself at the mall trying to waste some time before my doctor’s appointment. As I aimlessly wandered, I found myself back at the place I had been working so hard to avoid. But, this time I realized why I kept coming back to the baby section. I wasn’t there to buy fuzzy jumpers or teeny-tiny socks.

I was there for hope.

For me, the baby department represented a chance to dream. Hidden amongst the piles of miniature clothing, was the opportunity to imagine that this pregnancy could end differently. If I decided to buy something, that didn’t mean I was acting recklessly. It meant that I was allowing myself to live hopefully. By making a purchase for my baby, I was giving myself permission to stop thinking ‘if’ and start thinking ‘when.’

The hope I discovered that day did not replace my fears. Instead, I found myself making room for both emotions. It was possible to feel scared about losing another baby and to also believe that there was a chance that I would have a baby the way I had always imagined. It was liking finding a buy one, get one free deal. They came together. It was a wasted opportunity to leave the hope on the shelf when I was already buying into the fear.

Those of us who are pregnant after a loss find our hope in different places. Some of us feel it in our baby’s movements. Others hear it in our baby’s heartbeats. And there are those, like me, who see it in a tiny little onesie covered in rainbows.

About the Author: Rachel Whalen

Rachel Whalen is a 32-year-old who lives and loves in the endlessly charming state of Vermont. She is a Kindergarten teacher, a wife to Mike, and a mother to Dorothy and Frances. The decision to become a mom was an easy one for Rachel, so she was devastated at just how difficult it was to achieve that dream. After two miscarriages, she became pregnant for a third time. Her third pregnancy went smoothly, until she was diagnosed with severe preeclampsia at 28 weeks. At 30 weeks, Rachel became incredibly ill and was informed that her daughter no longer had a heartbeat. After a very traumatic delivery, Dorothy Grace Helena Whalen was stillborn on February 22, 2016. In July of 2016, under careful supervision, Rachel became pregnant again. Although it was an incredibly anxiety-filled pregnancy, Rachel remained in good health, and on March 19, 2017, Frances Michele Whalen entered the world. Throughout this entire journey, Rachel found comfort in sharing her family's story on her blog, An Unexpected Family Outing. She also found solace while participating in various online communities for grief and loss, including PALS. While Rachel wishes that no parent ever know the pain of losing their child, she has made it her mission to share her story and let other parents know that they do not have to go through this journey alone.