Hitting this point in pregnancy was pretty much my last milestone until the birth itself. It was at the 32-week mark that I stopped feeling our angel daughter move as much and when we ultimately found out that she had developed hydrops. It was when we went to the hospital for a movement check before heading to Houston that we found out her heart had stopped beating. My body had not gone into labor on it’s own, so I had to be induced. 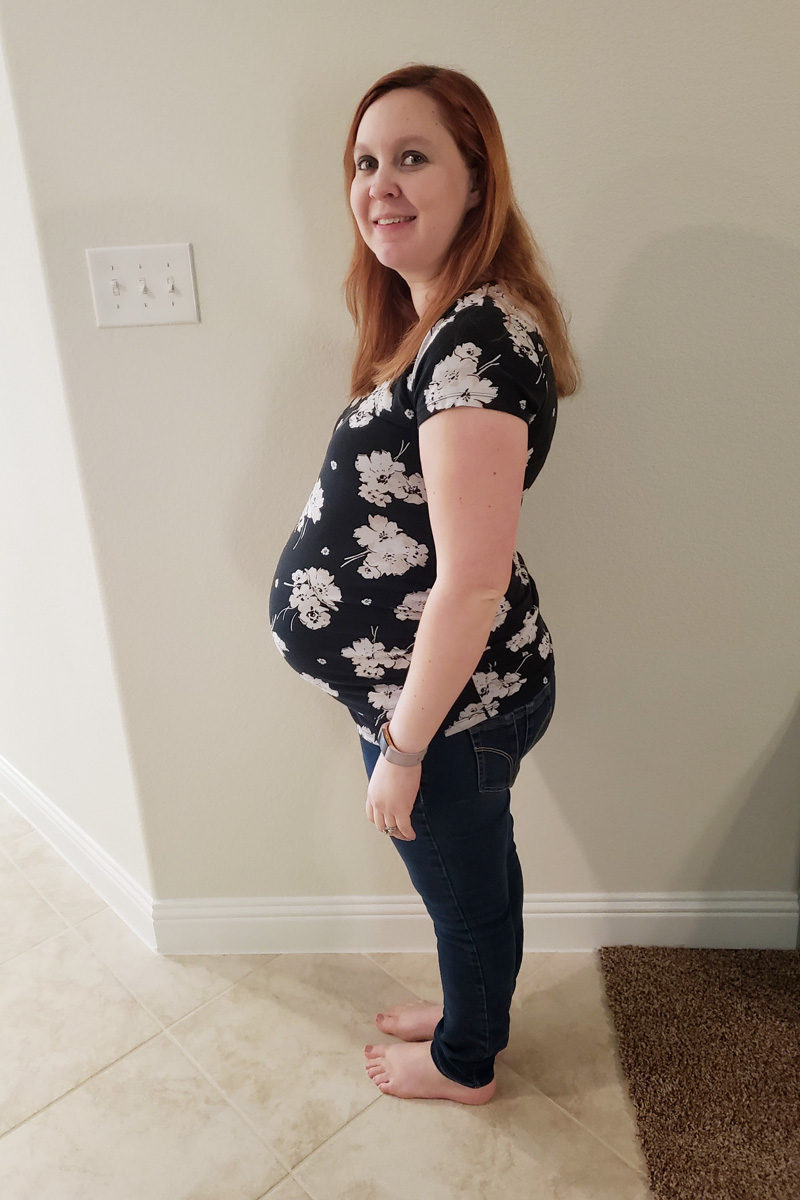 Despite knowing that she had a known chromosome issue and that is was not a failure on my body’s part, I still got nervous approaching this week. You still have thoughts of will I lose this one at this point too? I just want to make it past this week and get one week closer to her birth. I have eight weeks left before my due date and it feels like it will be the longest part of the pregnancy. It is also crazy to think that I’m in the single digits of number of weeks left.

I have also found that I am more afraid of giving birth this time.

I have been through labor twice and, thankfully, not had any complications. I think this birth feels scarier because it still doesn’t feel like I will get to leave the hospital with a baby. Even at this point, I’m still afraid of something happening. I’m afraid of going into labor too early or something happening during the birth. It just continues to prove to me how hard going through a pregnancy after a loss is. The fear may diminish at times, but it always comes back somehow.

So, I have passed all of my major pregnancy and loss milestones and all I have left is the birth.  Which is obviously a huge thing to pass. We just want to bring our daughter home safely. My son said something cute the other day that made me laugh. He said he didn’t want the baby to come home because he was afraid that she would eat all of his food!

On a happier note, we did our maternity pictures yesterday and I can’t wait to see them!

I had my hair and makeup done and we had some family ones done, as well as some of me alone. I was really excited because I found an awesome rainbow overskirt to use to represent our angel daughter and our rainbow daughter. My son is almost 5, so of course he did not want to cooperate, but I think we finally at least got a few good ones with him in it. He also told me that he didn’t like my hair curled and wanted it to go back to normal!

We had planned on doing them at the botanical gardens, but they were closed for a special event that we did not know about. So we had to go across the street to a different park. I think it ended up being the perfect spot and I was happy we at least had an alternate place to go. Especially after wrangling my son, I didn’t want to reschedule them!

Over the next few weeks, we have at least a few things coming up that will hopefully help the time pass a little faster.

I have an OB appointment this week and my last MFM appointment in three weeks. We should get another estimate of her size, which is my favorite part of the appointment, besides seeing her face. The last two appointments she has refused to show her face, so I am not holding my breath for her to cooperate this next time.

We are basically ready for her. We have almost everything we need except for a few small things and her room is completely ready. Now, she just has to stay in there a bit longer and keep growing.  It is definitely nice to feel prepared, although I feel like the closer we get, the more nervous I will get about the birth as well. I am just hoping everything goes smoothly.

Sarah Pruitt Cox lives in the Dallas, Texas area. She works full time as an accountant and tax preparer. She is the mother of a 4 year old son and three babies in Heaven. Sarah had trouble getting pregnant, but gave birth to a healthy baby boy named Nolan in 2014. Afterwards, getting pregnant was still a struggle. She had a chemical pregnancy in 2016, followed by a miscarriage in early 2017. Sarah became pregnant with her daughter, Jasmine Grace, in August of 2017. This was a rough pregnancy, and at the 13 week ultrasound they discovered that Jasmine had CDH (congenital diaphragmatic hernia). After an amnio was done a few months later, they discovered she also had mosaic trisomy 15.  Sarah and her husband had made plans to see a specialist in Florida, but the issues were too much for Jasmine and her heart stopped beating around 32 weeks. Sarah then had to deliver her, where she was born stillborn. She now wants to help other women who have experienced a life-changing loss like this and ensure that no one ever feels alone when going through this. Sarah has been writing about her loss through her blog Life is Stupidly Unfair: A Mom's Journey of Survival.