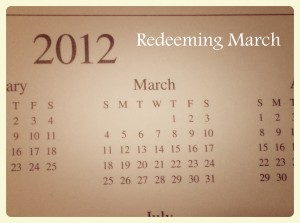 Next week, on March 9, our family will observe the sixth anniversary of the loss of our daughter Naomi. We said good-bye to her in 2009, in my nineteenth week of pregnancy, after I developed a life-threatening abdominal infection (unrelated to pregnancy) and suddenly went into labor. Over the next six weeks, I was in and out of the hospital and, as a result, we postponed our daughter’s memorial service until April. The month of March plodded by, one ugly grey day after another. And for the next two years, March pretty much looked the same, one ugly grey day after another, remembering the season of my daughter’s death.

Until July 2011, when one word on a digital test changed my life. Pregnant.

It wasn’t my first pregnancy since losing Naomi. I had actually been pregnant twice since her death, but those babies had each died in my first trimester. So this time, even while I hoped, I was fully prepared to say good-bye, again.

Only I didn’t. Week after week, this baby held on, and I began to have hope that we might have a take-home baby after all. I swallowed my fears and dared to write the date of our scheduled induction on my calendar. March 28.

For the last three years, it had been a dark spot on my calendar, full of clouds and reminders of the storm that had once threatened to destroy us. Now, I could look ahead and see a rainbow. For the first time in a long time, I didn’t dread March. The shadowed memories of my daughter were tinged with the light of my son’s coming due date. And when he came into this world screaming and gloriously alive, I felt like March had been redeemed.

“Redeemed” is a word that doesn’t come up much in everyday conversation. The full definition of the word encompasses both religious meaning and financial. We speak of God redeeming us from sin, bringing freedom to a captive. We also speak about redeeming a coupon, trading it in for something better.

Both of those meanings applied to me. My March of despair was traded in for one of joy and anticipation, and as a result I had a new sense of freedom from those clouds. I think that is a common feeling for many of us who walk the road of Pregnancy After Loss. After being so broken, so sad, so lost in grief for so long, we get a glimpse of the happiness that should come with pregnancy and birth, and when we dare to grasp hold of it, it is exhilarating.

Can your grief, your loss, be redeemed apart from the birth of a rainbow baby? Absolutely. For me, the redemption of March actually began the second I whispered hello and good-bye to Naomi. Each step in my grief journey, however painful, was also a step closer to the healing my heart eventually found. My PAL journey was simply another stage of that journey. Without it, I am confident God would have brought that healing in another way, but He definitely used my pregnancy with my son to move me forward. And probably the best symbol of that was a hospital bassinet.

When I was in labor with Naomi, the atmosphere was pure chaos. No one expected my baby to die, and I wasn’t even in labor and delivery, but another floor of the hospital where they were trying to treat me, not my pregnancy. One image that is very clear, though, is the hospital bassinet that they brought to my room. In retrospect, it was kind of pitiful. My baby was not yet 19 weeks along. There was no way she could have lived. The fact that they brought it communicated something special, that even at this age, my daughter was a valuable person to them, and to me. But the fact that it would not be used tore at my heart.

When we went on the hospital tour prior to our son’s due date, one of the places they showed us was the nursery. I remember cautiously peeking in the window and noticing an empty bassinet, waiting for a baby to be returned. I nearly went into panic mode, remembering so clearly the empty bassinet in my hospital room. The one that was returned to the nursery to hold another baby, but not mine. What if that happened again?

That image continued to plague me until the day of my delivery.  Another hospital room. Another empty bassinet, waiting to see how this chapter would end.

Are the shadows and the sadness still there? Oh, yes, at least for me. But the mingling of those things with joy – that is the blessing of the PAL journey for me. The joy is made all the more precious because of the sadness that came before, and the sharp edges of grief are now softened in part because of the joy I have experienced.  And I want to encourage you, as you approach your own due date, your own redemption of whatever needs to be redeemed for you, to embrace the joy that is coming. It’s okay for the shadows to give way to the light, for the sadness to yield to joy, and for your heart to sense that, in some small way, things are being set right.

What in your journey of loss and pregnancy needs to be redeemed? Share about it here!