When Reality Sets In 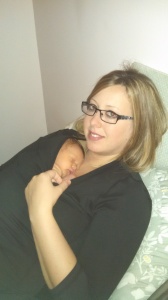 On September 17th, I gave birth to my second daughter. I’m not going to go into depth of my birth story or tell you how amazing her birth went. Having an amazing and memorable birth doesn’t mean much to me. I know that this is important for many women, but I didn’t care what happened in my birth as long as she lived. What I’m going to tell you about was when my pregnancy became real.

When I found out I was pregnant, I thought it was too good to be true. No matter what the 9 pregnancy tests told me, every single one of them had to be wrong, right? The blood tests would tell me that they were wrong. Now, off to see the doctor every 2 days for a blood test. Even with my progesterone going up normally, I still couldn’t believe that it was real.

Ultrasound after ultrasound showed me a health baby. No fluid in the brain, 4 parts of the heart, placenta attached correctly, etc. The moment we found out she was a girl, 3D ultrasound in which we saw her face, her baby showers, putting together the nursery, my continuously growing belly, her moving and kicking all the time, it seemed like I was watching the movie of another woman. A woman who was going considerably mad everyday waiting and waiting to see if she was actually going to have a child.

At 32 weeks, I started doing non-stress tests twice a week. At this moment, I realized that no matter what happened to this child, I was going to have a major surgery. Even with this realization, her being born was still not real to me, just the c-section was. I didn’t wear baggy clothes trying to hide my pregnancy, I just didn’t really accept it that it was really happening.

On September 17th, as my husband is driving me to the hospital for my scheduled c-section at 36 weeks gestation, I start to freak. Surprisingly, not about the actual birth, but about the spinal that I would be getting. I was focusing on anything I possibly could to avoid the reality of giving birth to a child that could potentially die.

The moment she was born, I heard silence. There was no screaming or crying. My heart stopped again. When a healthy child is born, they are supposed to cry and scream right? It took what seemed like an eternity for her to cry out. When we heard her first sound, we both started to cry. You would think that this is the moment that it would all become reality to me. It wasn’t.

About 2 hours after she was born she had to go to the special care nursery because she was having a hard time breathing and was getting a bit pale. She needed to have oxygen. Rolling into that nursery brought me back to the last time I was wheeled into a NICU to say goodbye to my first daughter. The reality that set into my head was that I was going to leave the hospital without a living child, again. I was never so glad to be wrong.

Sitting with her all day in the special care nursery, it didn’t feel real yet. I felt like I was playing house with someone else’s child. Maybe I was just the babysitter? This was just a temporary thing. However, 5 days later she came home with us. Guess what, it still wasn’t real! I wasn’t the type of mom that got to come home with a living child.

2 hours later, my husband has to go back to the hospital to pick up some things and I’m home alone with her by myself. I put her the sleeper on top of the bassinet (because this is where she was going to sleep) and she rolls over and puts her face into the side of it. Pushing right up against it where she could suffocate! This is the moment where it all became real to me. The moment that I saw how she could have died if I wasn’t there to see that happen and move her away. The moment that I realized that I was solely responsible for her at that moment without any monitors to tell me she is fine. Strictly having to rely on my “mothers intuition.”

I didn’t sleep at all that night. Even though we put her in the pack and play normally, I still feared for her life. Feared that I was going to let her die. That I wasn’t going to be able to keep her alive. That first night was the scariest reality I felt since I took that first pregnancy test. Then looking over the discharge papers before her first doctor appointment, I found out the reason why she didn’t cry right away. The cord was wrapped around her neck. I realized how close I was to her dying before I would have met her.

Charlynn is just over 2 weeks old now and I feel that I’m overcoming my scary reality. I know that it is always going to be there. I poke her sometimes when she is sleeping just to see if she will move. I love watching her cry sometimes because when she was born she didn’t cry right away. It takes so much willpower to not hold her all the time and let her lay down in her pack and play to sleep. I’m definitely on a new journey with a different path of motherhood. I am now a step mother to a 10 year old, a grieving mother to a son and daughter and a mother to a living daughter.

About the Author: Amber Combs

Amber Combs has come to find out that she is many things. She is currently pregnant to a son, mother to fraternal girl/boy twins, Devyn and Jaxton, a rainbow named Charly, as well as a wife to an amazing husband who is the reason she is where she is today. She has two male dogs, Knox and Diesel, which are her best friends and spoiled way too much for their own good. Those dogs warm her heart so much. Her twins were born on Jan 1, 2013 due to Prom, major placental abruptions and sepsis. Her son, Jaxton, died after birth while she was still being closed up from a classical cesarean and her daughter, Devyn, died on Jan 2, 2013. All of this was caused from a virus in her first trimester in which she was misdiagnosed by 5 doctors. Her trust and faith in the medical community was destroyed once she found out from the autopsy why her babies died. Months after, she found MISS Foundation and they helped her and her husband get back on track with getting back to living. She has learned so much from this group of people and they have become her main support and a great group of friends. Without these people she doesn't believe she would have survived the death of her children or have the courage to have another child. Her rainbow daughter was born in September through another C-Section. The decision to get pregnant was extremely hard to make for the fear she had and the trust she lacked.