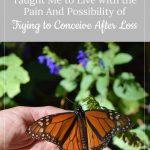 I learned that last summer when my children and I started collecting butterfly eggs. Rescuing, we called it. That summer, my two boys and I spent the long days scanning the undersides of milkweed, parsley, and dill for butter-colored beads of possibility. When we found one, which we often did, we’d carefully pull off the green perch and carry it home. 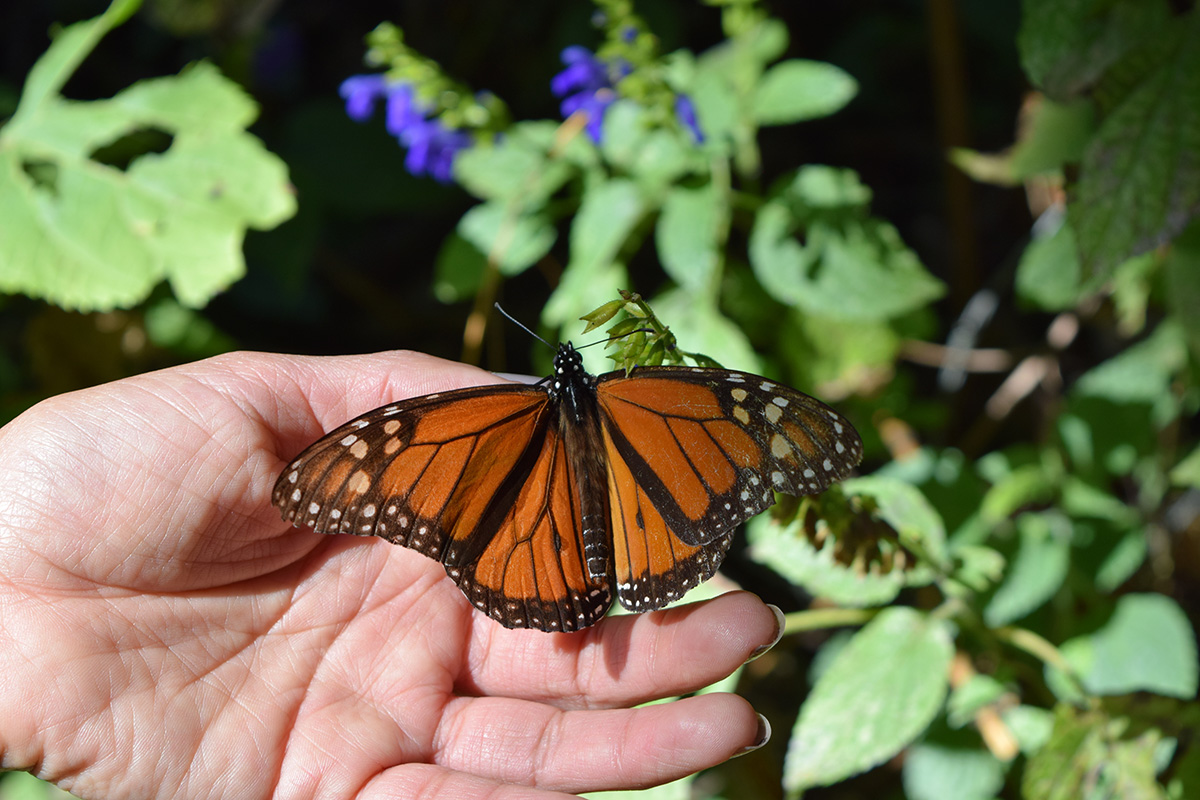 When we collected our first butterfly eggs, there was an egg inside me, too. My egg divided and began to assemble itself. The possibility of a person.

After butterfly eggs hatch, if you look close, you’ll see a caterpillar in miniature. It looks like a made-up thing. Tiny and exact. No bigger than a hangnail. In our white mesh cage, we fed the monarch caterpillars flaps of milkweed. The swallowtails munched feathers of dill and parsley. And, every day, they grew.

The baby inside of me grew, too. In the ultrasound, you didn’t have to look close to see its arms and legs. In the middle, a reassuring flutter. Its humanness was undeniable.

When the caterpillars are as big as your pinky, they’re just about ready to make their cocoons. After that, there’s nothing to do but to wait.

The morning that the first of the monarchs emerged from its cocoon, I unzipped the white mesh cage. The butterfly pulsed its perfect wings slowly, then quickly. It disappeared into a tall maple. Poof. My four-year-old boy cried. He had wanted to hold it. It’s not easy to let things go.

When the nausea faded, I fixated on the butterflies instead of my body. I gathered more milkweed. More dill. I cleaned that white mesh cage two times a day. These caterpillars would have everything they required. Life finds a way, I told myself, coaxing a feeling like hope. It seemed like it could be true.

One day, inside our white mesh cage, I counted one. Two. Three. Six. Twelve. Fourteen. Twenty-eight butterflies in the process of becoming. Extraordinary abundance. I counted again. I thought I might throw up. I wanted a nap. I wanted it all to be a sign.

If it was a sign, it wasn’t a good one because, by the next ultrasound, the fluttering inside me had disappeared.

All that was left was a terrible stillness. There wasn’t anything anyone could do. Later, I would learn that she was a girl, and she was perfect except for the fact that she wasn’t alive.

Three weeks after that ultrasound, when everything still ached, my father-in-law, who is a more-than-amateur entomologist, visited from New York. He handed me a mason jar with four swallowtail cocoons in it.

It was Labor Day, and while he was here, the last of our monarchs emerged. Or tried to. I found the monarch half in, half out of its papery casket. Its wings a crumpled kite. It was all wrong. I brought the monarch to my father-in-law. “Ah,” he said, “it happens.” There was nothing to do. I closed the door to the bathroom and let myself fold down on the cool tile while he let the creature go.

When we woke up to iced grass, it was time to put the last of the swallowtail cocoons, the ones my father-in-law had driven from New York, into the fridge. They would have to winter over between the ketchup and chutney.

That winter, while the butterflies waited, we tried again. And again.

In a fit of reverse psychology, I threw away my ovulation test strips and gave away our baby clothes. I emptied our home of anything that would betray my want.

Just after my daughter’s due date, our neighborhood shut down because of a virus that had emerged across the world. I wedged red cabbage and bok choy on top of the swallowtails’ mason jar.

We approached, then passed, 24 months of trying. I bought more ketchup. I submitted to blood tests. I re-bought the ovulation test strips.

On Memorial Day weekend, when it seemed more like summer than spring, I took the mason jar out of the fridge.

The swallowtail cocoons were terribly brown and crinkled. They looked like death. It seemed impossible that I had ever believed they could be anything else. The next day, a police officer killed a Black man in my neighborhood. The pain of it ricocheted across the world.

As I woke each morning to more of our neighborhood smoldering, I wondered what else could be possible. I had no idea. We took our two children and two cats somewhere safe for a while. I brought the ovulation test strips. I didn’t think to bring the swallowtails.

After the curfew lifted, we came home. We shuttled our things from the car to the porch and lined them up next to the white mesh cage. Then, movement. A set of black wings brushed with buttercream and, in the middle, two eyes aflame. A miracle. In the backyard, for one horrible breath, it seemed like maybe the swallowtail could not fly. Was that wing bent? But then — Oh! Away it flew. My body ached with the beauty of watching it go.

As for me? Well, it’s summertime again.

I don’t know what will be possible this season. But I’ve planted dill. I’m letting the milkweed grow. And, every day, I go out in the world to try to find something that I can carry home.

A version of this article initially appeared on the author’s website.