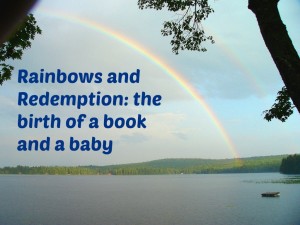 “So I’ve got this crazy idea…”

I think that’s how I began an email to my friend Melissa over four years ago. I lived on the East Coast, she lived on the West Coast, and we had never met in person, and had only spoken on the phone a few times. But we had connected online in Hannah’s Prayer, a Christian forum for women who had experienced pregnancy loss. We had formed a strong friendship that had seen us both through loss and, now, pregnancy after loss. She was about four months ahead of me. Both of us were expecting our first rainbow since experiencing multiple losses, and we were both dealing with the anxiety of that journey.

My crazy idea the fall of 2011 had to do with our other common interest – writing. We both love words and had joked about writing a book together. But maybe that idea wasn’t so far-fetched, I thought, as I shared the rest of my thoughts in my e-mail. What if we wrote a devotional for other PAL mamas? And what if we didn’t do it alone, but invited some other women from the Hannah’s Prayer forum into our project? It could be a weekly devotional for the whole PAL journey, something to encourage others in the same way that we had each been encouraged on the HP PAL forum, a way to remind other women that it was normal to feel anxious during PAL, and that it didn’t mean their faith was lacking, and that they could find peace through the promises of God’s word.

Melissa agreed with my crazy and we got to work. We recruited others to do some of the writing, assigned them different weeks, decided on special topics for the holidays, sent out release forms, took photos ourselves to use, set up a website and email address, and tentatively planned on a release date of Easter 2012. It would be several weeks after my baby was born…assuming he lived, which I wasn’t ready to assume yet.

As the contributions came in, we were struck by the common themes: anxiety, fear, hope, guilt, joy, confusion. All were emotions that could have crippled any of us, wondering if we were normal or going crazy. But because of our online connection, we had enjoyed the mutual reassurance that came from knowing we were not alone, and that what felt crazy was actually very normal for this journey.

We were also struck by how, although our experiences of both loss and pregnancy were very different, and although all of the writers came from different denominational backgrounds, the message that God had given each of us was the same. He is good, and He can be trusted, regardless of how our pregnancies turned out (and many of us had not given birth by the time the book was released, so it was still very much a walk of faith!). And now we could share that reassurance with others beyond our immediate circle.

Melissa’s due date had already arrived with the birth of a healthy baby boy, and mine was looming on the horizon…but so was the release date of our devotional.  We were trying frantically to finish everything, including the editing, before my baby was born, fully expecting me not to have time to do much after that! My version of nesting included rewrites, editing, and rearranging pictures to match the text.

The end of March arrived, and with it my son, healthy and screaming and alive. A few weeks later, we released our ebook, “Rainbows and Redemption: Encouragement for the Journey of Pregnancy After Loss” and spread the news as much as we could online.

This month is the four-year anniversary of that release. R&R has been downloaded hundreds of times, and the rainbow babies we all carried during that time are now three and four years old. (Amazingly, of our entire group of PAL writers, all of our rainbow babies arrived safely and are still with us four years later!) When I look back on my pregnancy after loss, the gestation and birth of this book was as much a part of my journey as the gestation and birth of my son. Through that process, I was reminded of a Swedish proverb, “Shared joy is a double joy; shared sorrow is half the sorrow.” There is great strength found in community, whether in the sharing of joy or sorrow.

“Rainbows and Redemption” has always been a simple free download, and it always will be. I hope that it is an encouragement to you, too, and a reminder that you are not alone on this journey, but are surrounded by many others ready to help halve your sorrow and double your joy.