8 Hard To Admit Things About My Rainbow Postpartum Depression 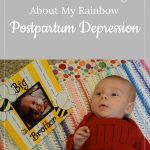 It sucks to say. It sucks to admit that I have postpartum depression (PPD) and anxiety. I knew I was at higher risk because I lost my first son, but it still sucks.

My health care providers have offered therapy or support groups to help me, but I’ve refused both. I didn’t like therapy when I went after Oberon passed away, and I don’t think it would be significantly different now. Plus I don’t want to add an errand that I have to manage, especially one that means I’m spending time away from my son, Everett, doing something I don’t even want to do.

Support group is another story. If there was a nearby support group for women experiencing anxiety or depression after the birth of a rainbow baby, I would be all about it. But a “regular” postpartum depression/anxiety group is not for me. I would not be able to relate to those moms. 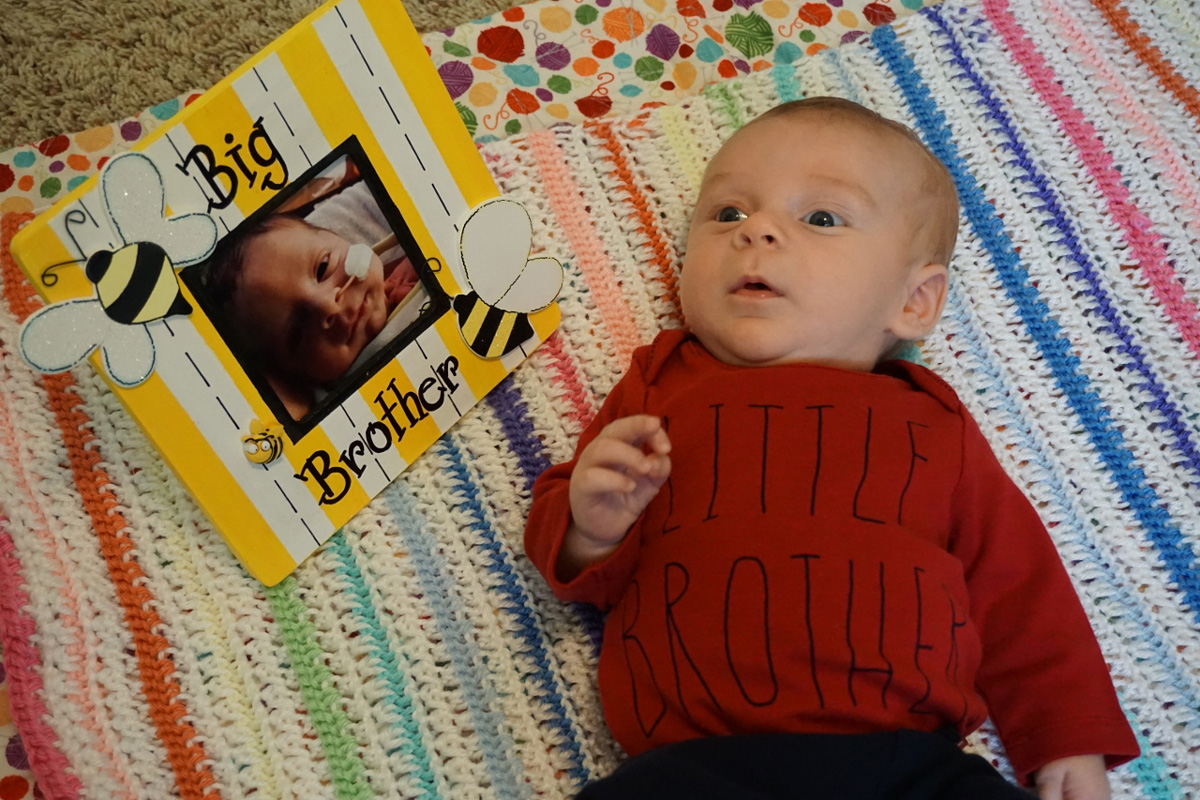 I feel like I need to clarify – I love my son Everett, I am happy that he is here and he is healthy. Cognitively, I know parenting him is what I want to do. But my emotions haven’t caught up yet. My emotions are a big mess.

I knew that having a baby in my arms would cause me to revisit raw grief for my first son, Oberon. And it has. Sometimes it results in uncontrollable sobbing, sometimes it makes me pull back.

I also know I’m not alone. After admitting my less-than-magical feelings, a number of both men and women reached out to me to share that they also experienced some negative (or not-super-positive) emotions in the postpartum period. In the spirit of emotional honesty and hoping it will help other moms feel less alone, I wanted to share some specific thoughts and feelings I’ve dealt with over the past two months. None of them make me wish I didn’t have Everett, and in spite of momentary challenges, I know that I am lucky to have a living son in my arms. I don’t think any of them are permanent, and some of them I don’t think are really true even now – but that’s one of the tricks grief and anxiety can play on you.

Nothing I’m feeling now even approaches the raw, intense depression in the first few months after Oberon died. It’s just where I am now.

So here they are, eight not-so-great, hard to admit things I’m experiencing postpartum with my rainbow.

The few times I’ve gone to a doctor’s appointment, a fitness class, or a coffee run on my own, I don’t miss my baby. I don’t need to cuddle him the minute I walk in the door. I’m fine when visitors want to hold him for hours. I see him a lot. And I’m breastfeeding, so I hold him a lot. My husband is back at work while I still have some time off, so I have alone time with him a lot. And right now? It’s enough. I do think this will change over time, especially when I’m back to working five days a week.

2. I don’t think my baby cares whether it’s me or someone else comforting him.

There’s no “mommy magic” here. If anything, there’s more “daddy magic” in our house. I’ve started getting some smiley moments, but Daddy has been getting them longer and more often. I’m absolutely certain there will come a time when he’s glued to me and cries at separation, but that time is not now. Sometimes it makes me feel like an inadequate mom, other times it just makes me a little more exhausted and detached.

Here at the two-month mark, I think it’s getting a bit easier. Everett is much better at latching, and the only time it’s painful still is during the evening fussy time. Some nights he’ll be so fussy he’ll pull his head away without unlatching, and that is quite painful. Especially when he does it over and over again. It’s frustrating, but I know it’s futile to be frustrated with an infant, so again I just go into detached mode sometimes.

So has my husband. So has our photographer. So have other family members. It happens. But unlike in families where all the children are alive, it cuts and stings when it happens. Especially when I do it.

5. It feels like I’m waiting for the inevitable big bad thing.

In the early weeks, I would check his breathing and be sure he was dead. If I wake up on my own, not because of him fussing, I have to check him immediately to make sure he’s alive. When he is in deep sleep, it sends me back to holding his brother’s body when he was dying. I know nothing could prepare me for losing another child, but it feels like my mind is trying to.

I hope that as Everett grows out of being a tiny baby and more and more into a toddler and little boy, this specific anxiety will fade. I know that anything can happen, but I think getting to a different phase of development will help solidify that Everett’s is a new and different story. It doesn’t have the same ending.

I should be happy that I have my rainbow now. Many women don’t have that, or don’t have that yet. Even so, I don’t feel guilty about the emotions I’m having. I’m still a loss mom. My first baby is not with me, and I’ll never see him again. That is intense, tragic, and understandably impacts every aspect of my life still. While Everett will bring much to my life, and hopefully much healing, he doesn’t replace Oberon. He doesn’t fix me.

Surprisingly, I think the relief of finding out I was pregnant again was more healing than actually having him here. That switch of going from completely empty to expecting again added an ability to be calm. Of course, it was fraught with complicated emotions, but I went from empty to growing. I suppose I expected another rush of healing and centering when Everett was born, but it hasn’t been that way for me.

7. I’m irritated with my body.

When I went to the ER with mastitis, the nurse asked me how many months along I was. When I saw the doctor for a postpartum checkup, the check-in woman asked me multiple times if it was a prenatal appointment. It never ceases to amaze me when people assume pregnancy – especially in a place where postpartum women must show up with reasonable frequency. My pants don’t fit, and I’m crossing my fingers they will soon(ish) so I don’t have to buy a new wardrobe. I got cleared to exercise, but exercise seems to be causing renewed bleeding so I have to get that figured out.

I want to love my body for giving me Everett, but at the same time, I hate it for letting something bad happen to Oberon. It’s complicated, but for now, I just want to get to a place where I don’t have to think about it much. So my goal is for strangers to stop assuming I’m pregnant, and to not have to buy a mountain of new clothes.

Maybe it’s the sum total of everything else I’ve mentioned. Maybe it’s that at one day old, my son was taken from my side to be admitted to the NICU. Maybe it was the extreme grief and anxiety that came with having another baby in the NICU. Maybe deep down my subconscious is trying to protect me – from reliving my grief for Oberon, from allowing my sweet Everett to fill my heart.

I know that all I can do is spend more time with him, and as he grows so will our bond. He will start to react and interact more, and I expect that will help me. Last night after nursing at 3am, Everett giggled. I felt a little bit of that gush of ridiculous parental pride. I want him to do it again, and again. When he does, I’m sure my own giddiness and giggles will turn up too. More and more moments like that will help. 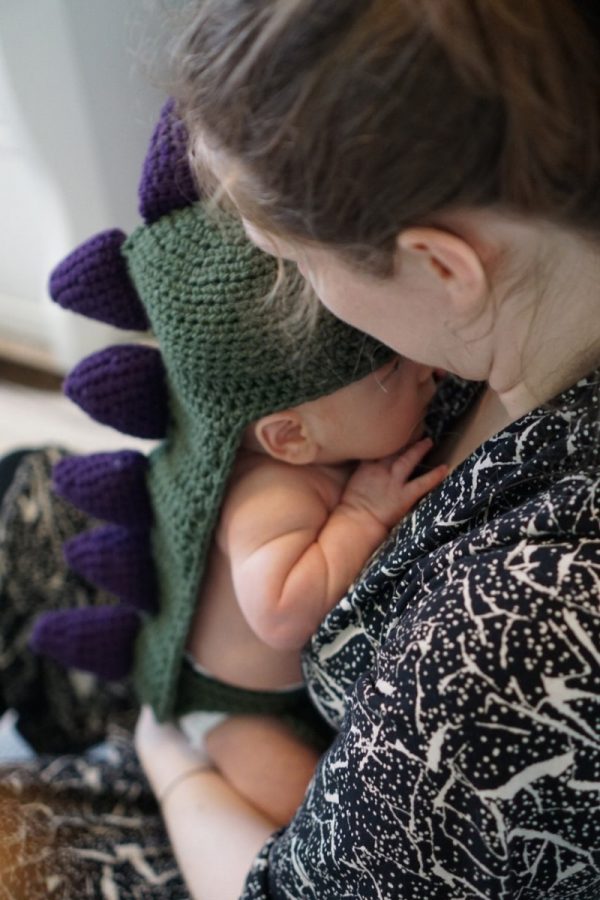 How long will it take? I don’t know.

I’m trying not to put a limit on it. As long as I start having more and more good moments, more and more good days, I’ll call it a win. I’m still going to have dark moments. It’s going to take a long time to figure out how to love and be fully present for Everett, while still remembering and loving Oberon.