A part of me still can’t believe that I’m writing my rainbow baby’s birth story. Calvin Thomas arrived on August 2, one day short of one year and one month after we said goodbye to his brother, Charlie. A warning and apology for how long this is! 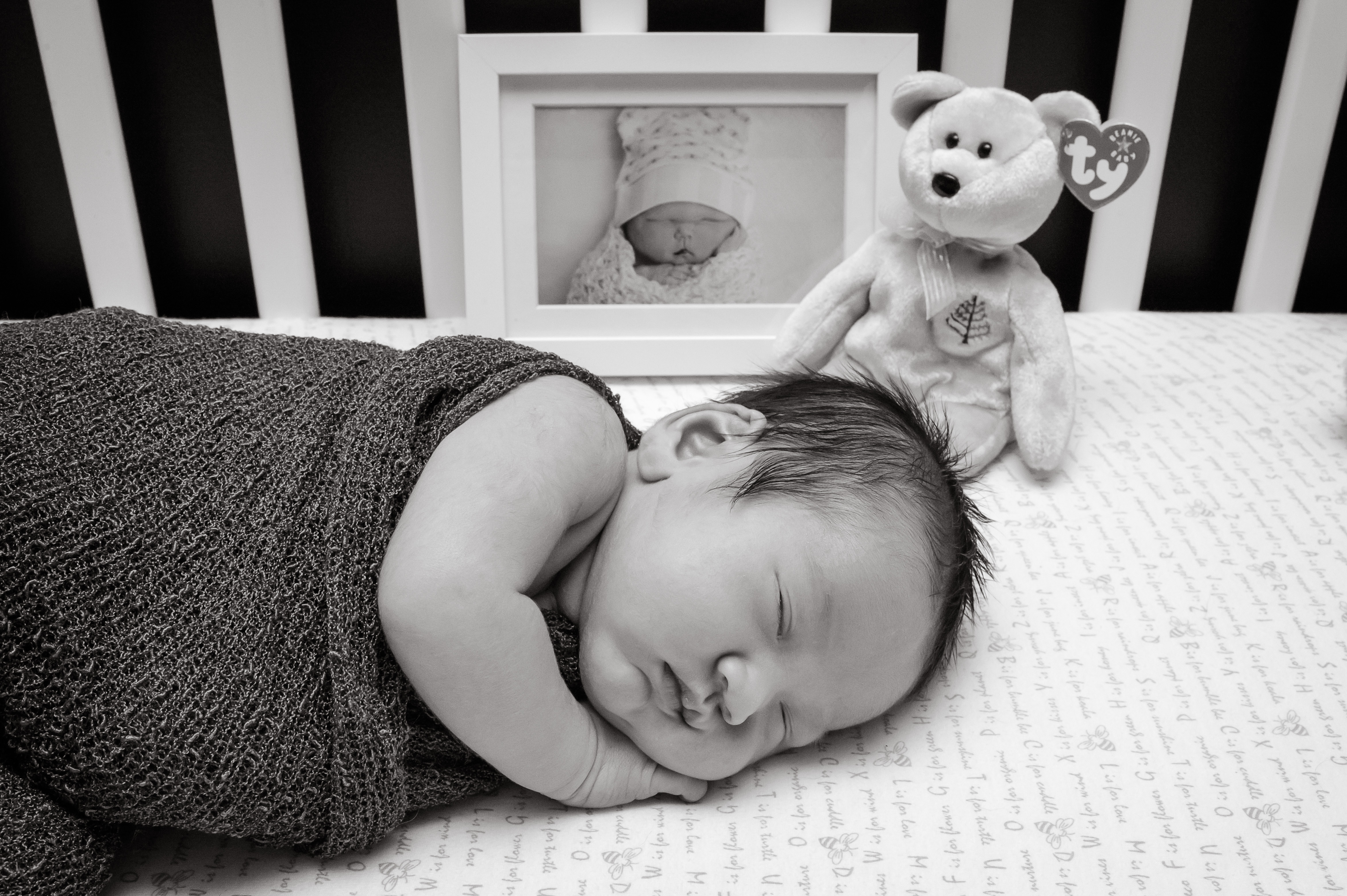 We had been joking all month long that I’d go into labor on July 31 because there was going to be a blue moon. But when July 31 finally rolled around, and after a few nights of contractions that’d be regular for a few hours, but then fizzle out, I was starting to think I’d be pregnant for awhile. But at 1 a.m. (on the morning of August 1), I woke up and just knew that I was in early labor.

Even though I knew I should get some rest, I wasn’t able to sleep. So at 6 a.m., I got up and took a shower. My husband, Jesse, woke up and immediately knew something was up. He started cleaning up around the house and finished packing his hospital bag. I kept my doula up to date on how things were going, but didn’t feel like I needed her quite yet. At one point, the contractions seemed to slow down, so we took a short walk and ran some errands. While we were out and about, my contractions started ramping back up and I knew we had to get home. Once we arrived back home, I headed to the bedroom to try and get some rest. When I realized that the contractions were now so intense that rest was impossible, I had Jesse call my doula, Angie, to ask her to head our way.

Angie showed up around 3:30 p.m. and after observing me for awhile, we decided it was a good idea for Jesse to call the hospital to give them the heads up that we’d be on our way shortly. My contractions were about three and a half minutes apart by this point and lasting at least one minute long.

I was already five centimeters when we arrived at the hospital. After we got settled into our labor and delivery room, they put in my IV port right away even though nothing was going to be administered through it right away. I was attempting a VBAC, so this was per protocol. I spent the next hour and a half changing positions and laboring through contractions that seemed to be intensifying. Since the pain was starting to get overwhelming, I decided it was time to get into the tub. The water was nice and hot and felt amazing. I couldn’t believe how much it helped to be in the water. I was still very uncomfortable, but it took the edge off.

The nurse checked me again after I got out of the tub and I was excited to find out I was now eight centimeters. However, at the same time, it was disappointing because I was absolutely exhausted and the contractions were now right on top of each other, with hardly any break in between. After 20 hours of labor, I knew that if I wanted a chance at a vaginal birth, I was going to need to be able to rest. Since that was impossible at this point, I asked about pain medication options. I opted to start with an IV dose of fentanyl which only made me feel loopy and didn’t do anything for my pain, so they started prepping me for an epidural. Ten minutes after it was in place, I was having a normal conversation with husband, which hadn’t happened for hours.

At this time, the nurse brought up the possibility of breaking my water to see if that’d help move things along, but after discussing with my doctor, we were advised against this since baby’s head still wasn’t fully engaged even though he was at zero station. I was still only somewhere between eight and nine centimeters dilated at 11 p.m., but was so much more comfortable. I felt much more relaxed and wasn’t upset that I couldn’t start pushing yet. Two hours later, at 1 a.m., they checked me again and I was finally completely dilated! However, baby’s head was still higher than they wanted, so I tried to get some rest and let baby move down before starting to push. I wasn’t able to sleep, so for the next couple of hours, we tried different positions to help baby move down. We also found out that baby was posterior and that was likely not helping matters. I started pushing at 3:15 a.m., even though baby still hadn’t moved down and we decided it was time for my doctor to come in and evaluate the situation. Shortly after this, my bag of waters broke and my doctor arrived just minutes later. Once he arrived, I spent the next four hours alternating between pushing (while my doctor tried to get our baby to rotate) and resting.

On top of everything, I was starting to have intense pain in my glute area. Because of this, some of the pushing positions that were once really effective were now too painful. My care team thought that maybe the baby was pressing down on a nerve, so getting any relief depended on getting baby out. Finally, at 8:30 a.m., we talked options for next steps. The epidural was wearing off and I was exhausted. My doctor said that I was pushing effectively, but baby was still posterior and wasn’t descending. Our options at that point were to keep pushing, call in an OB to discuss using a vacuum (but since he wasn’t that far down, this wasn’t likely a good option), or have a repeat cesarean.

Jesse and I asked everyone to leave the room and after almost no time at all, we decided on a repeat cesarean. Baby’s vitals were great and he was doing extremely well with everything, but we didn’t want things to change and the situation to turn into an emergency. We just wanted our baby to be here. 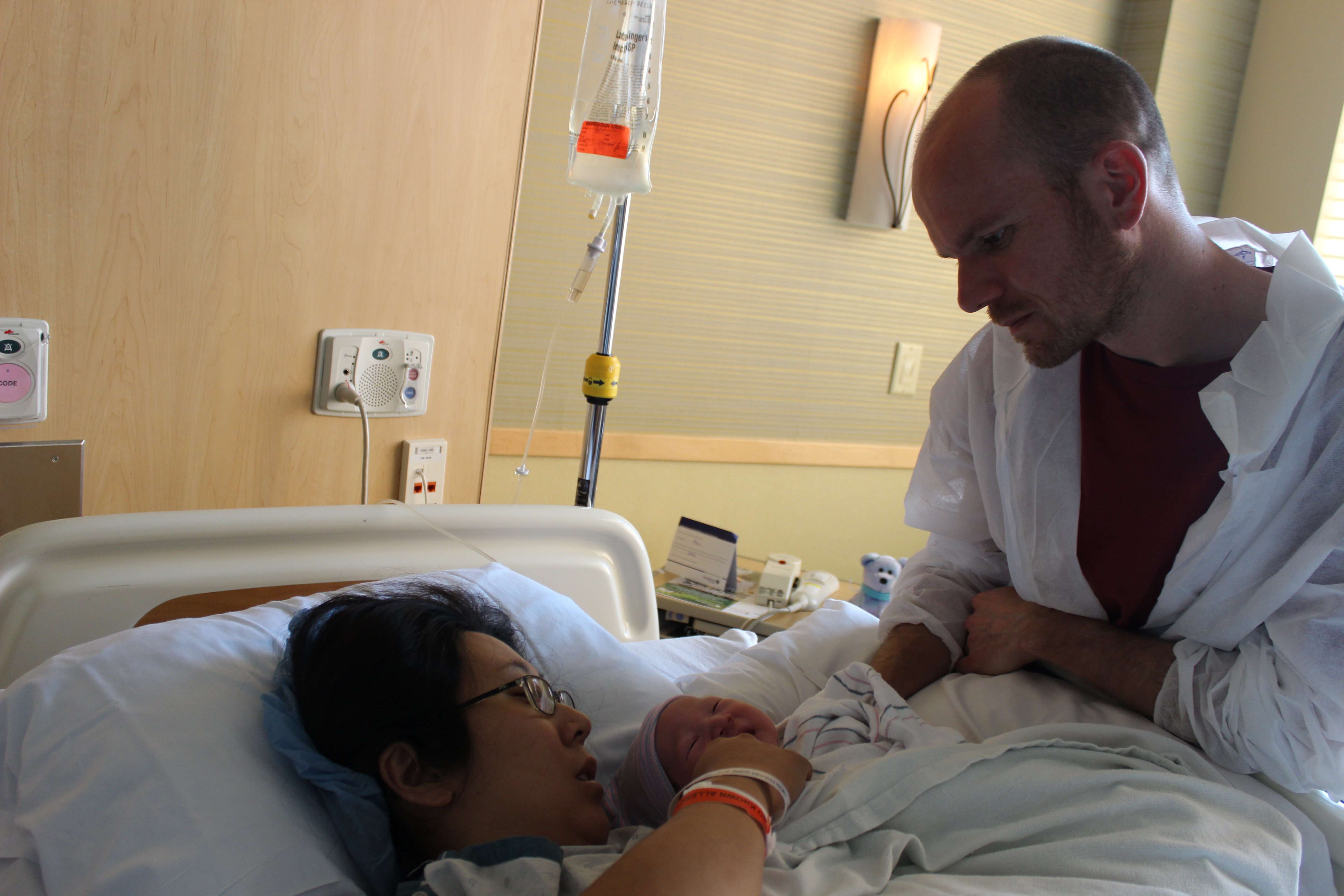 Once we made our decision, things moved quickly and it reminded me a lot of how Charlie’s birth happened. I started to feel anxious, especially after the on-call OB and anesthesiologist at first refused to allow my doula into the OR. We stood our ground and they eventually agreed to let her in. They finished prepping me and I was wheeled into the OR at 9:45 a.m. My doula and Jesse got suited up and were brought into the OR at 10 a.m.

Even though I’d been through it before, in a way, everything seemed scarier with the surgery this time around. I think a part of me couldn’t shake the worry that we had made it this far, that we were so close to meeting our baby, that it wasn’t going to happen. But having my doctor assisting with the surgery and my amazing support team helped immensely and before I knew it, I felt the familiar tugging sensations and my doctor said that they were about to pull our baby out! At 10:10 a.m. Calvin Thomas was born. Hearing him cry was the most amazing sound I’ve ever heard and I’ll never, ever forget that moment.

While they were prepping me for surgery, the nurses kept saying how big of a baby they thought I was going to have. I was sure they were wrong, so you can imagine my surprise when they announced that Calvin was nine pounds, two ounces and 22 and a half inches long! After just a couple of minutes in the warmer and in dad’s arms, he brought him to me and we got some skin to skin cuddling time in. I couldn’t believe how much hair he had and how beautiful he was. It felt surreal to be holding MY baby. 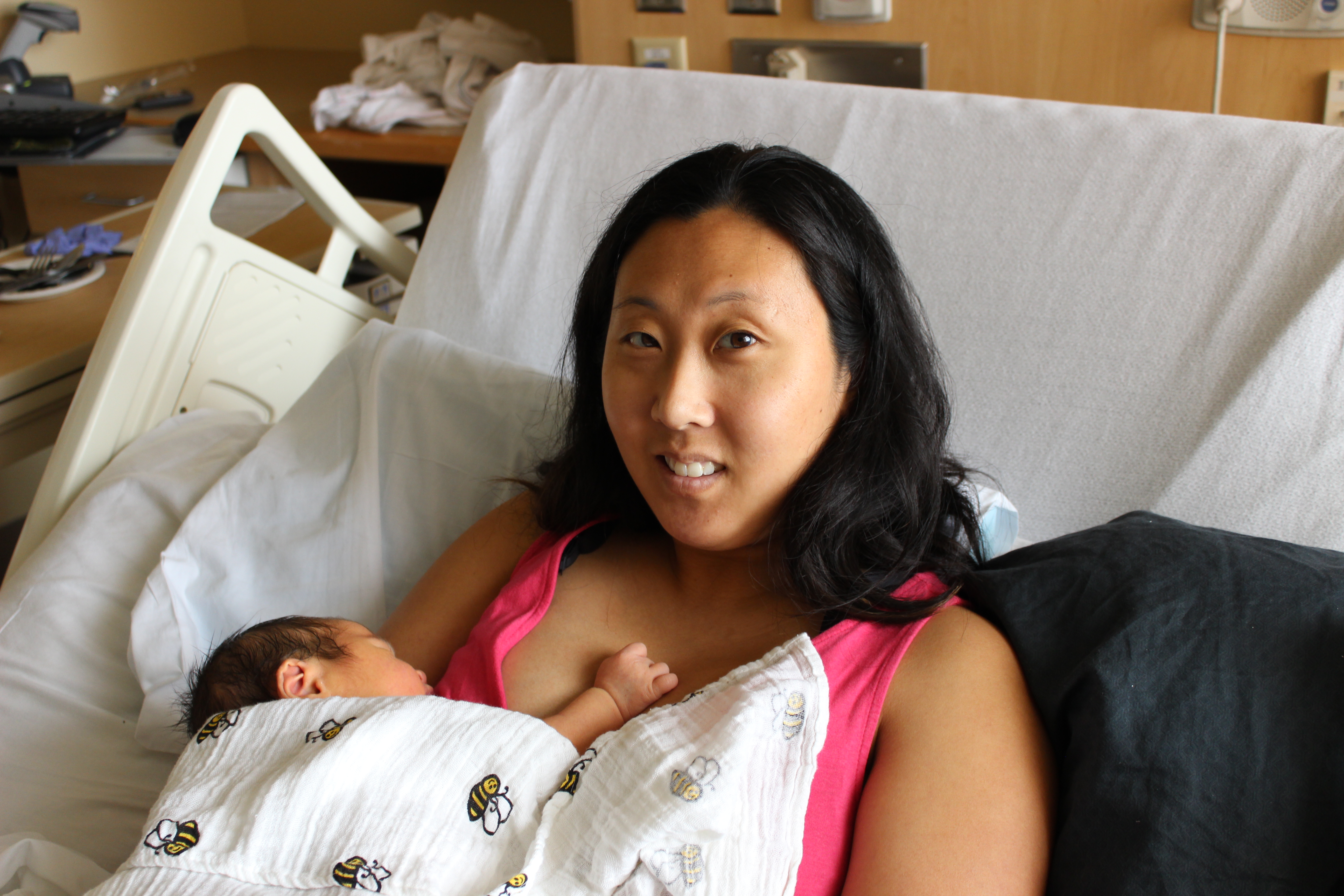 Now that Calvin is here, we sometimes find ourselves wondering if he would have shared any of the same features or personality traits with his big brother. It’s sad to think about the fact that we’ll never know and that our boys won’t be able to grow up together, but Calvin will surely know about his sweet brother and how many hearts he touched during his short life.

About the Author: Hyedi Nelson

Hyedi Nelson currently resides in Minnesota with her husband, dog Cole and cat Sam. In her first pregnancy, Hyedi miscarried at 5.5 weeks. After getting pregnant again in December of 2013, Hyedi and her husband grew cautiously more optimistic once they made it to the 5.5 week milestone, and then even more so after the first trimester. At the 20 week anatomy scan, right after they found out they were expecting a boy, the ultrasound technician noticed a spot near their baby’s heart that concerned him. Hyedi and her husband were sent to see specialists the following week for a level II ultrasound where their baby was diagnosed with a pericardial teratoma with a presence of hydrops fetalis. There were few treatment options available. Fetal surgery was initially presented as a possible course of action, but because of the poor outcomes and high risks associated with it, it eventually was no longer recommended. The doctors hoped that their baby would hold on until 32-34 weeks when he could be delivered and then if he were strong enough, he could be operated on at that time to have the tumor removed. But at 29.5 weeks, Hyedi experienced a Premature Rupture of Membranes and was admitted to the hospital to try and keep her pregnant for as long as possible. But later that evening, after a BPP/NST showed that their son’s condition was deteriorating, their son was delivered via C-section. Their son, who they named Charlie, was born on July 3 and passed away peacefully in Hyedi and her husband’s arms 34 minutes later. Hyedi is currently pregnant again and will be documenting her journey, including all of the ups and downs, and everything in between. She also blogs about her journey to living a healthy, balanced life at Finding a Balance.