Rachel’s Bump Day Blog, Week 26: How were the holidays, you ask? 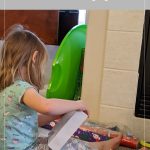 How were the holidays, you ask? Well, it was a bit of a challenge, to put it nicely.

The Wednesday before Christmas, our hot water heater decided it was done with this life and began hemorrhaging water.

Now, most people would say, turn the water off and call a plumber. Well, our heater is on the second floor, so that water has to go somewhere. Husband very nicely pushed me to take a shower as it might be my last for a bit. I did. Five or six years ago, Husband and a band of friends installed said water heater. None of them plumbers, so when he spoke with the plumber installing the new one, he found out ALL the things he did incorrectly. Safe to say, Husband doesn’t have a future in plumbing.

By Friday night we had a new functioning water heater. Rainbow hadn’t been bathed since Monday (we do every other day due to her overly sensitive skin). Husband was also in a similar stinky boat. My Friday at work was all dry shampoo, baby wipe bath, and drenched in body spray.

That week we also had plans with mother-in-law to see a local holiday attraction at the Botanic Gardens.

Due to the water heater fiasco, husband wasn’t sure if he would be able to come along (due to going to purchase and new one). Our ticket time was 5pm, and my mother-in-law was asking if we could do dinner before or after the event. Before was out of the question due to the time it takes me to drive from work to get Rainbow, then back to the garden. I told her it was a maybe for afterward. Husband was able to come after all, mostly due to me forgetting Rainbow’s heavy coat at home (it’s been unseasonably warm in Colorado).

So, we all go to the exhibit. It was beautiful, but chilly. Nearing the end, mother-in-law demands I pick where we go for dinner since I “know all the good spots around here.” (Side note: I used to be that foodie that went to all the hip places and tried new foods, etc. Then I had a kiddo and husband in school, so that stopped pretty quickly.) I brushed off the comment with the excuse that I haven’t been able to explore the area in years. Thought maybe she would drop it.

Oh, I was wrong. She then turned to Husband and asked him. He replied with a local burger joint that is close by. This burger joint the last 2-3 time we had been, for whatever reason took FOREVER with our food. By this point it was almost 6:30 and Ranibow’s bedtime is 7. Once again at the restaurant, somehow people sat after us got and finished their food before we got ours. By the time we got home it was after 8. I had to work the next day, I was so DONE.

Fast forward through the weekend, we were able to do family holiday fun with my family on Sunday.

My parents recently downsized their house and sold the old one to my brother and his brood. So, we had the holiday dinner at my brother’s NEW house. I found it funny that my brother hosted and my dad still came over early to make the roast and gravy. So Bro made mashed potatoes and I brought green beans. Rainbow played with her older cousin, and the youngest cousin (almost two) tagged along and wanted to do all the big girl things. It was cute.

Monday was business as usual, work, home, bed. Christmas Eve was fairly low key as well. One of our Santa traditions is that we get a lot of stocking stuffers from Walgreens, just tchotchkes and things and candy. I usually accomplish this early, but not this year. So, Husband stayed home with Rainbow while I went on a mini shopping spree (Yes, momma got some of her own stocking stuffers too, because I can!) We went to my mother-in-law’s for Christmas Eve dinner, she made a nice duck (recipe care of Alton Brown). It was tasty. Rainbow had a great time playing and being goofy. We brought our sweet dog, who loved every minute of being at her grandma’s.

We got home and put out milk and cookies for Santa, read a book. I tried to read ‘Twas the night before Christmas, but Rainbow thought that meant the Nightmare before Christmas, so she insisted that she “read” it. We settled on another great standby book by Neil Gaimen (yes, he wrote kids books about a panda named Chu). 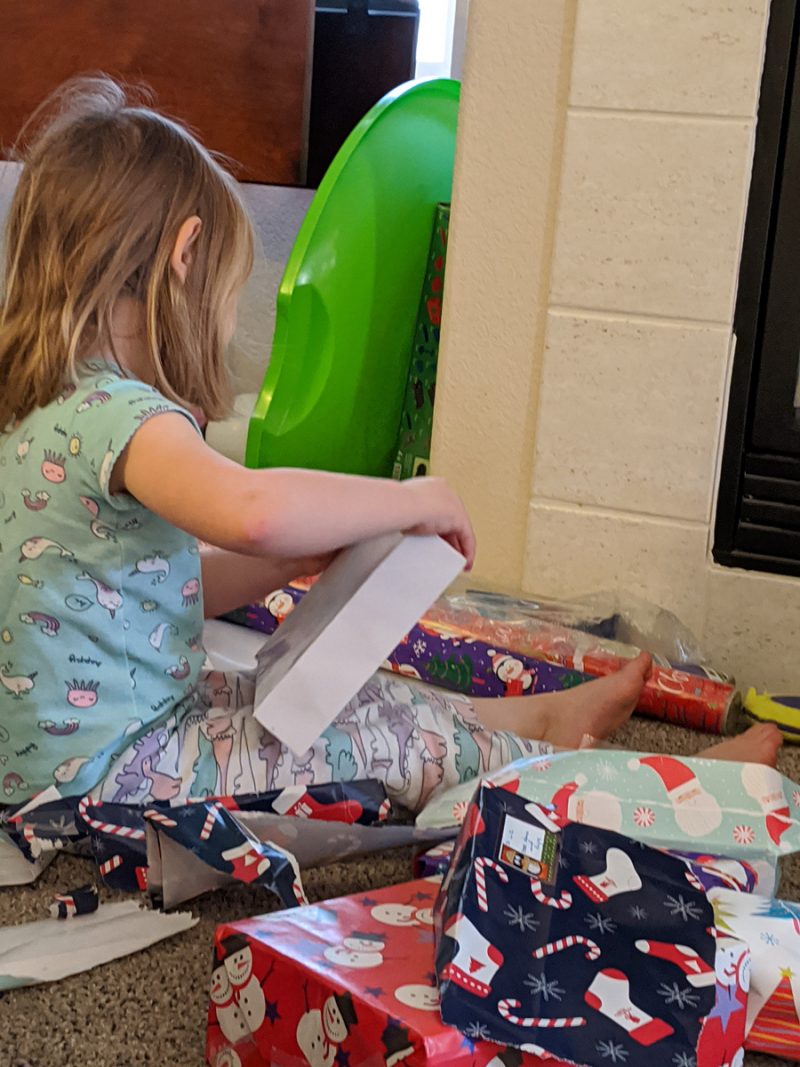 Christmas was low key and glorious.

I wrote previously that we usually run amuck on the day of and are hardly home. This year we were able to have a slow morning, opening presents, eating breakfast, and slowly consuming glorious coffee. We did go to Orphan’s Christmas for a hot minute (before other guests really appeared). However, I got to see some of the people that fill my bucket and give me spoons back. I am so glad that we were able to spend our last Christmas as a family of three in a low-key, relaxed environment!

Although I struggled to feel the Holiday Cheer this year, I embraced spending time with people I love. I am so thankful for those I have, and the life I have been given. Yes, it can be hard and a trial, but with the strength of my friends and family I know we can make it through everything!

Happy New Year to all of you.

May the year 2020 bring you everything you are hoping for! I am not one for resolutions, as I know myself. I set goals, which feel easier to achieve than a resolution to change an aspect of my life. One year my goal was to read 100 banned books. I made it to about 25. I am not sure what this year’s goal shall be… Something to think about for my next post.