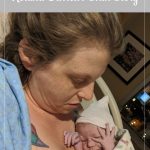 On the day of my induction, I was scheduled to be at the hospital at 9:00 pm. We were concerned that Husband’s cough was going to get him kicked out of the hospital (it was a sinus infection). I worked all day to continue to try and save my leave for when little man arrived. I dropped Rainbow off at her grandmother’s house and she was more than happy to stay with her “Oma” while we were at the hospital.

Arriving at a hospital in the time of COVID-19 is pretty bleak in my mind.

We were allowed to go in through one of two entrances. We were greeted by my RNs, and LPNs in masks and gloves. They took our temperatures and gave us stickers indicating that we were screened and ok to enter the hospital. We proceeded up to the Labor and Delivery floor via the elevator, using a tissue to press buttons which we threw away when we got to the floor. They were expecting me, had my bracelet all ready, and sent me back to my room.

To my surprise, they took me to the same room that I was laboring in on the previous Saturday. I changed into my gown and unpacked a few things, knowing it might be a long haul. The RN came in and started the intake process, asking questions, getting labs, running tests, etc. I was visited by the resident who told me that due to regulations they couldn’t start Pitocin until midnight when I would be 39 weeks exactly. So, I settled in for a nap before midnight. They also took my blood glucose when I first got there, and came in and said that they might have to start an insulin drip. I was super disappointed. It took a few hours to get all the supplies and everything ready, so they retested my blood glucose and it was low, so they didn’t have to start the insulin drip! 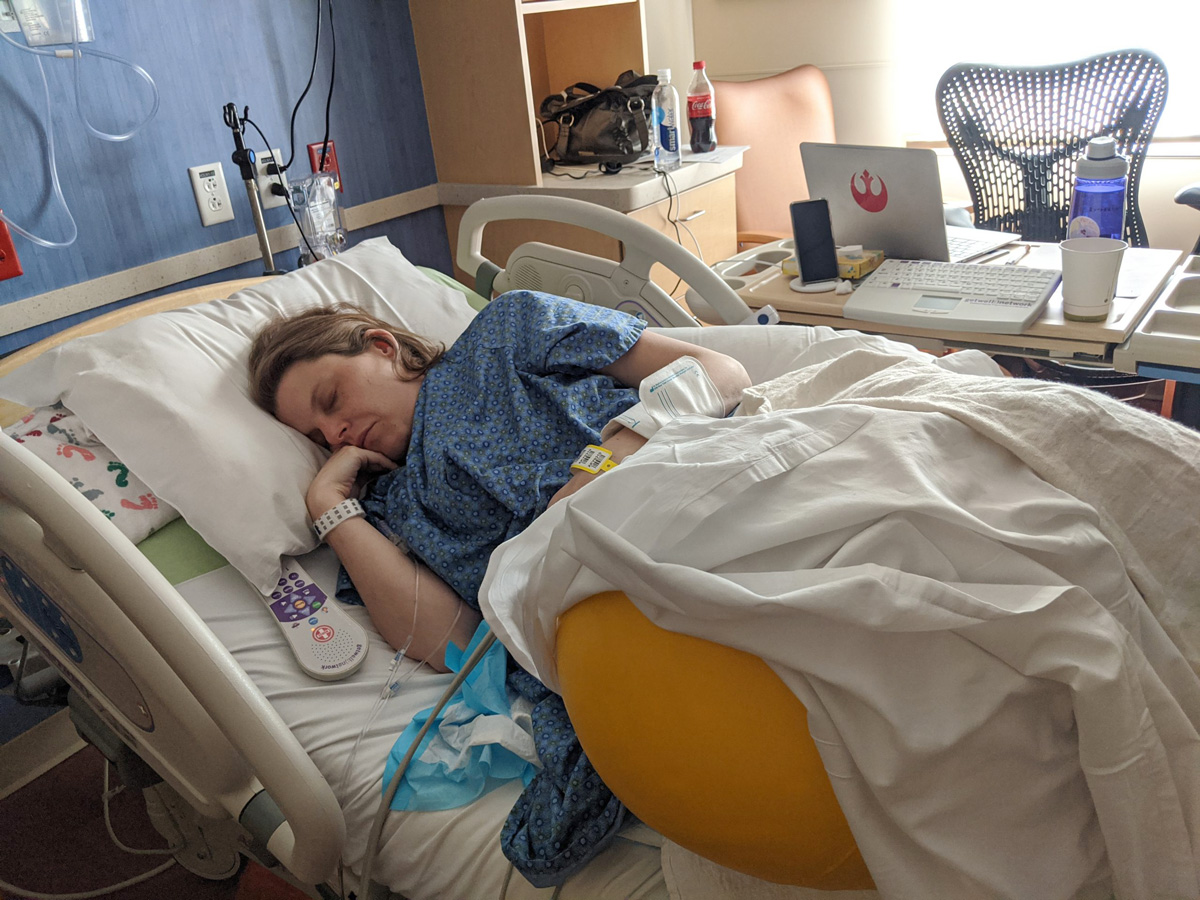 At midnight the nurse came in and started my Pitocin drip.

I actually went back to sleep for a short time and woke up around 7:00 am when it was the change of shift for the RNs. I bounced on a ball, I walked around, and I tried to make the contractions stronger, to no avail. I discussed with the RN then the resident the option of breaking my waters to get this “show on the road.”  The RN convinced me to get an epidural before breaking my water in case it speeds labor so much that I might not be able to get it after. I agreed. I forgot how unpleasant it is to have a needle and tube stuck into your spine. (Yes, I have had a spinal tap before. It isn’t fun). It was all over and done with fairly quickly and my right leg almost immediately went all warm, tingly and numb. The resident assessed my dilation and decided to turn up the Pitocin and wait a few hours to get it higher.

Fast forward a few hours, and she decided it was time to break the waters.

She had two RNs in there to help her out, hand her tools and monitor me. She broke my water and Baby’s heart rate disappeared from the on the belly monitor.  They couldn’t find it. So, they popped in an internal monitor that stickies to the scalp to give readings. There was no reading. They immediately called a code C and everything happened so fast. I was flipped onto all fours, and Husband was suited up into surgical garb. The resident started to explain that sometimes breaking the waters can cause such shock in the baby that their heart just stops. So, they were going to do an emergency c-section to get him out.

She was explaining all of the risks and side effects of an emergency c-section, and all I could think was, “Of course this is happening. Of course my baby is going to die. Where is my husband? I need him to hold my hand. This is scary. I am not ready for this. OH, GOD”… and a plethora of other colorful words, dooming thoughts and such.

We got the the OR and I was shifted to the operating table where I was laid on my side. They told me they had his heartbeat back on the monitor and wanted to make sure it stabilized before taking me back to my room. CUE THE TEARS. Husband walked into the room and shimmied past nurses to hold my hand, and I lost it. My nurse was comforting me, as was the resident who was apologizing profusely. My nurse started making Coronavirus jokes that we had discussed earlier in the day to make me laugh. Notably, “Is that you Rona?” We had a little giggle, while I still cried.

The doctor declared that baby and I were stable and could return to our room.

I got there and was hooked back up to monitors, and we discussed that the plan was from there. They had stopped the Pitocin when the heartbeat could not be found, so they wanted to monitor me without it for a bit to see how my body was responding. I got to take a nap, which was nice. At this point, I was coming down from the endorphin rush and I was exhausted. Husband and his classmates like to use big words to explain that I was very tired, that word is somnolent. Before change of shift again, they restarted the Pitocin. This is when my body figured it out. It was like, “Oh, we can have a baby now? LET’S DO IT!” I went from 5 cm and -2 station to 9.5 cm and fully effaced in about 30-45 minutes.

I told the RN that it was time to push. She was very calm and slightly distracted, just getting stuff ready. I was like, “No really he is coming if I push or not, people.” The doctors arrived. The resident got the bed ready and told the attending I was in transition. It was a quick process of events. From there, my husband was watching Captain Marvel and was told to come stand next to me, and I was told to push. When pushing, they have you push three times per contraction. I pushed three times,  and I could feel the pressure of his head RIGHT there. So, I pushed 2 more times and his head came out. One or two more pushes, and I had a slimy newborn on my stomach. They wiped him off, and he proceeded to pee all over me, and many others in the room. So, if you do not recall, Rainbow came into the world and pooped all over me; he peed. So that is apparently a thing my kids do to me. 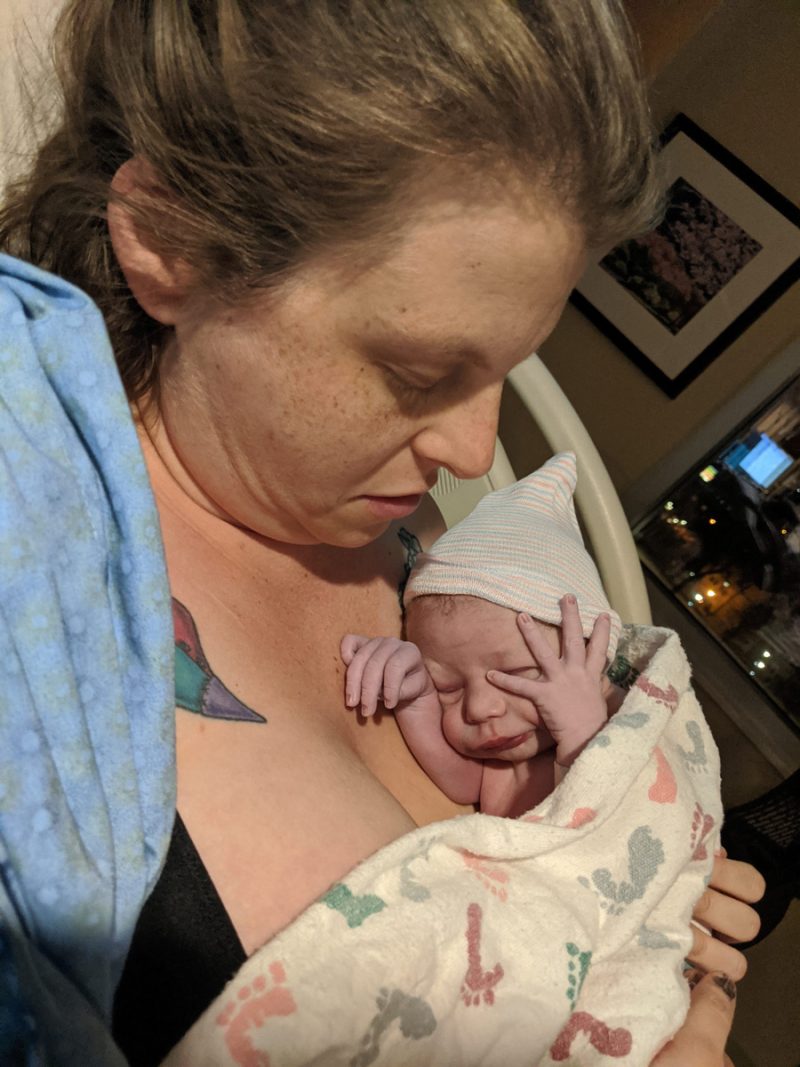 From there I was told that I had no tears, and I was going to be prepped for moving to the mom/baby side. It took a little while, but we were moved over to the other side around midnight. We spent the next 48 hours in the hospital. I used all the resources I could to help with breastfeeding and other questions.

We were not allowed visitors what so ever, my husband was considered my visitor. Labor and Delivery was the only department in the whole hospital that was allowed one visitor. I was sad that Rainbow could not come meet her baby brother in the hospital, but I was also glad that we had that time ensconced in a small bubble of help to get used to a newborn again. I was super thankful that all the providers I saw were very articulate about what I needed to watch out for upon discharge. I do not recall that being the case when we had Rainbow.

All in all it was a good experience, and we got our Pot O’ Gold to come home with us. Now for the next leg of our journey… Home life… EEEK!