Prince, Pregnancy, and Loss: Insights Into Grief and Public Mourning 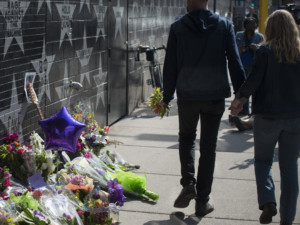 Since Prince’s well-publicized death, people have offered condolences and messages of sympathy to both me and my husband. We have received countless texts, emails, and Facebook messages acknowledging our love for Prince and his music. Prince has always been a part of our life together and was something we shared from the early days of our relationship. Prince was also present in our lives during our first pregnancy loss which coincidentally occurred during Superbowl weekend of 2007, the year he did the halftime show. In contrast to the many friends and family members who reached out over the last few days, back in 2007 we got only a few acknowledgements. Most people didn’t know what to say so they said nothing. Our grieving was mostly private. Having terminated a pregnancy for a medical reason, we didn’t feel entitled to grieve in the same way as those who had experienced other types of perinatal losses. The concept of disenfranchised grief fits very well with our experience. According to Kenneth J. Doka, who coined the term and has written extensively on the topic, disenfranchised grief refers to grief that is not openly acknowledged, socially validated, or publically mourned.

I think about how Prince and his then-wife, Mayte Garcia, reacted to their baby’s death due to complications from a genetic condition. They were secretive and according to popular news sources, misled the public by implying that the baby was still alive. Prince’s need for privacy was normally quite high—I can only imagine after such a tragic event that he felt an even greater need to protect himself and his family from outsiders’ curiosity as he and Mayte tried to deal with the devastating feelings that accompany a baby’s death, including shock, grief, anger, and possibly shame. It’s hard enough to talk about death in American culture; talking about the death of a baby is even more difficult.

In contrast to that terrible year when our baby died, Prince’s death feels different. While it is very sad for me to say goodbye to him, the fact that he is being mourned by everyone (or so it seems) is comforting. We are able to share our love of all things Prince with our friends, family, and strangers on the internet. At first I felt embarrassed to be so sad about the death of someone I never met. (Actually, it’s not true that I never met him. At one of the many concerts I attended, I approached the stage with a dozen purple roses. I tossed them in his direction and he scooped them up as I ran back to my seat, star-struck and speechless.) Now, I am happily sharing my favorite videos and clips with others and listening to Prince music every chance I get. I am amazed by the public’s response to an artist that I thought had a small but loyal fan base.

When we became pregnant again in 2008 we received so many congratulatory messages. “Congratulations!” everyone said emphatically. Implied but unspoken in their enthusiasm was the acknowledgement of the loss and perhaps their relief that we might have a healthy baby.

We named our rainbow after Prince’s female alter ego. Now an 8 year old, she listens to Prince with us. She knows that he wrote Manic Monday for the Bangles. She tries to sing Little Red Corvette but can’t quite hit the right notes.

New losses always bring up old losses. I can’t remember the baby I lost without thinking of that Superbowl weekend and Prince. And now, in getting to mourn his death openly and publicly, I am also getting to mourn her in a new way that advances my healing. The passion and love that Prince channels in his music helps me feel more connected to the baby I lost as well as to my living children and to myself.

*Photo Source:  Bringing flowers for Prince at First Avenue in Minneapolis by Fibonacci Blue  at Flickr, use allowed with Creative Commons 2.0 license.