Parenting After Loss: Why We Chose a Sleep Monitor Device

Five years ago this winter, I began working in a children’s hospital. Six weeks into my position there, I held a 6 day old little boy as he started to turn blue. I can still see the desperation in his eyes as he gasped to get air but all that came out was a hoarse faint cough. I still remember my legs turning to jello. The alarms in the room sounded like sirens that rung in my head for weeks to come. I didn’t know how to react. I just screamed for help. The nurse came rushing in and reacted immediately. She flipped him over and smacked his back a few times. She was shaking as well. He was in the ICU moments later. His parents, well they were at his twin brother’s funeral, who died at birth six days earlier.

For years to come, I heard those alarms day in and day out. I stared at machines keenly watching numbers as I held fragile sick babies in my arms. I would secretly pray that their oxygen didn’t dip. What if I couldn’t help them? Those numbers did dip many times over my years there. Somehow I learned how to react effectively and stay calm but it always shook me to the core. It became very obvious how fragile life can be and 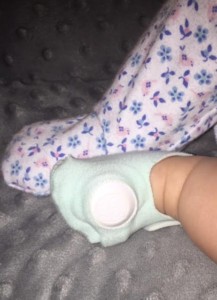 how quickly devastation can occur.

Then my own tragedy occurred. My son was born sleeping after passing away in my womb to what was believed to be an umbilical cord accident. That sounds better than it actually is. He was strangled to death, deprived of oxygen. For a long time, I had nightmares of him gasping for air and screaming out to me for help while in my womb.

When I became pregnant with my rainbow baby, I anticipated the fear that would come with her arrival. How would I know she was breathing at all times? My coworkers and I would joke about me hijacking a pulse oximetry machine for home use. We laughed but on the inside, this was no joke to me. I would have to keep her alive. How would I ever sleep again? So I made the decision that we would use some sort of monitoring device. It was an easy decision for me given my anxiety. 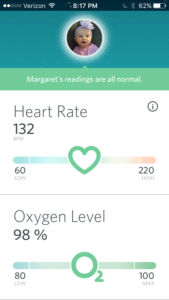 We chose the Owlet. It’s been one of the best decisions for my sanity since she has been born. The Owlet is a hospital grade pulse ox that slips on my baby’s foot and monitors her heart rate and oxygen through blue tooth. It alarms me if it can’t get a good reading, if the sock has fallen off of her foot or if her heart rate or oxygen is not within normal perimeters. The alarm sounds different for all of these. Thankfully. In the event that her oxygen or heart rate drops, I am offered the opportunity to arouse her or even begin CPR if I had to. These few seconds could save her life. That is why it was an easy decision for me. The Owlet has been extremely accurate for the past 16 weeks. No false alarms.

My daughter was born and (of course) had some issues breathing right out of the womb. This was my biggest fear. I lied on the delivery bed crying and praying aloud for her to get it together. It shook me to the core all over again. But she did get it together. We spent a week in the hospital unrelated to breathing issues. She was on a pulse ox most of the time. This machine gave us information that helped to relax us a little more. I could see her oxygen level. I could see her heart rate. I could see with my own eyes that she was okay.

The Owlet also has an app for your phone where you can login and see the numbers. It is helpful most of the time and I have actually not used the app in about six weeks. When my post-partum anxiety took a turn for the worse, I became a little compulsive about checking the numbers. This wasn’t necessary as there is a base station that alarms you without the app. But the details became important to me and I obsessed over them. That would be the only negative thing I would say about the Owlet and that is my issue, not the Owlet’s.

I am grateful for the Owlet, for the extra sleep and the chance to help my daughter if ever need be.

About the Author: Lisa Hand

Lisa Hand is the "PALS Presents" Coordinator for Pregnancy After Loss Support. She currently resides in Virginia with her loving husband and daughter. She is a military wife, blogger, lover of Christ, Certified Child Life Specialist, avid reader and lover of aromatherapy. Lisa has 5 babies in her heart and one in her arms. Her journey to motherhood has been long battle of infertility, recurrent miscarriages and stillbirth until she was blessed with her rainbow baby in 2016. Lisa is an active member of Resolve and Share. Lisa is passionate about infertility and baby loss awareness. You can visit her lifestyle blog Lisa Danielle and follow her on Facebook. Lisa is honored to be part of the Pregnancy After Loss Support team and walk with other bereaved mamas on their journeys to motherhood and parenting after loss.