Parenting After Loss: How Do I Live Life and Keep My Child Protected? 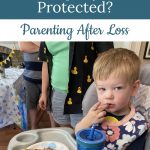 This quote and its various versions that I have seen plastered on mugs and t-shirts and used by some people to sum up the difficulties of parenting seems innocent enough. That is, until you remember how many parents have not been able to keep their children alive, despite their best efforts, their deepest desires, their tears, their prayers, their screams, and cries. I hate this quote so much.

Why? Because parenting after loss is different. Once you have lost a child, you spend the rest of your life fearing that it could happen again, whether that is in subsequent pregnancies or with your living children. You know the pain, the truth, and the reality. So, you do everything you can to protect yourself from that pain and to protect your kids. 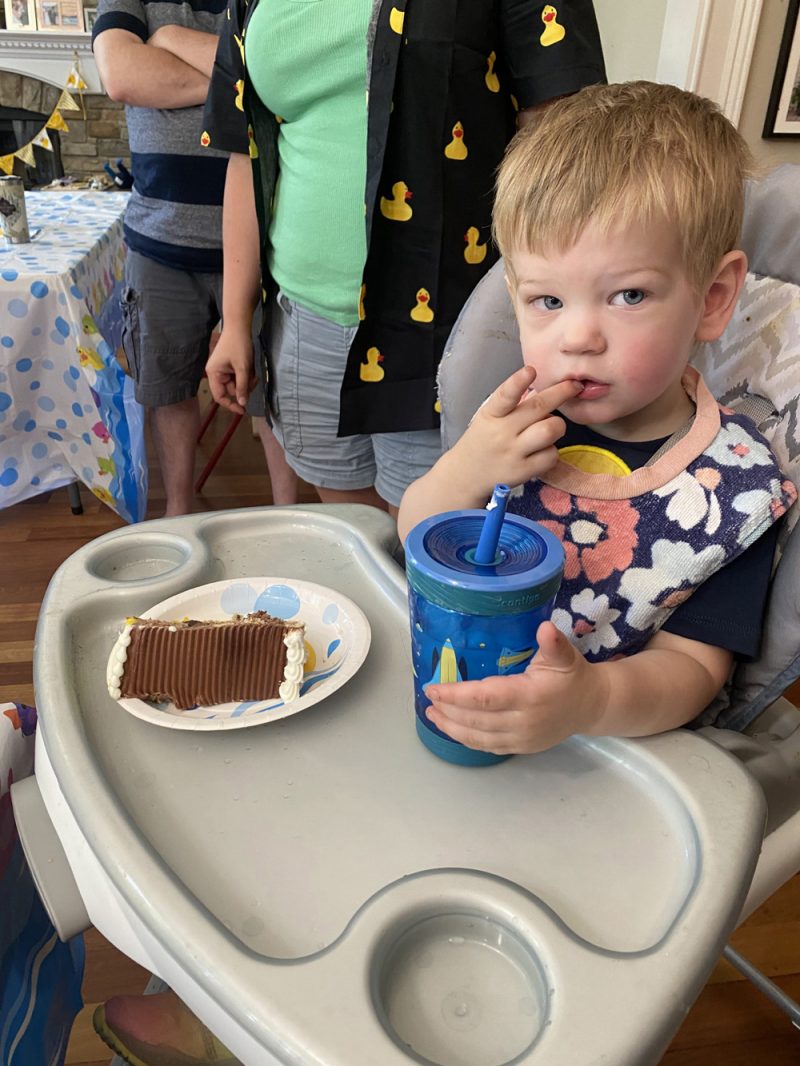 This fear of protecting our babies has hung over me for years now.

My body could not keep Sweet Pea and so I lost our first baby. My body could not keep Colette from developing to be too small or fighting off the preeclampsia. Then, I decided I did not have enough faith and belief in my body or the medical community to go through another pregnancy and so we used a surrogate’s body to bring our little rainbow baby home. All of those moments created a different narrative than what I had previously believed—no matter how well we followed the rules of pregnancy or wanted a baby, we could not control what happened at the end.

When Elliott was born and I first held him, I remember this sense of calm that he was here and I could stop worrying. That feeling was short-lived though as we navigated through how to understand our baby, how to make sure that we were not going to do something wrong, that we monitored his growth and health enough to either get help when he needed it or to stay the course if he was good. Elliott came close to losing too much of his birth weight and I remember thinking I need to make sure I am protecting him from that (luckily, he bounced back and was totally fine).

In the two years since he was born, it has often been a struggle of figuring out how best to protect him from harm.

As he started crawling and walking, it was the don’t touch that, oh, no, now he can get to that, the reconfiguring of our house and then the re-reconfiguring and so on. We baby proofed everything he could get to and pulled him away from anything we could not baby proof. He fell, sometimes crying and screaming for attention, but usually bouncing right back up and causing more anxiety and panic for the adults around him than harm to himself. When his daredevil tendencies coupled with his dad’s genes of being clumsy (and okay maybe some of mom’s genes on the same topic), we often felt real fear and panic and usually tried to fix it so that the next time he would not be able to do it.

We did not venture out much in order to protect him from Covid and when we did venture out, it was with a lot of limitations. Were we going to be around people we knew were following proper procedures? Were masks required of others? Could we do it outside? All these questions definitely took a toll on us, but if we were protecting him, then we knew we had to keep doing it. Then, going out meant protection—did he have a coat? Sunscreen? Proper shoes? What were we doing to prevent this or that?

And then, finally, after 23 months of waiting with bated breath, Elliott got his first shot of the Covid vaccine and we breathed a huge sigh of relief.

We were not 100% in the clear, but we were on our way. He was going to be fully vaccinated and while we knew nothing could completely protect him from getting Covid, we knew that the vaccine would significantly reduce the possibilities of it being a serious illness. We started to talk about things we could do in the fall once he was vaccinated, to plan, to dream of a world in which we were not closing ourselves off from everyone.

I started to see a light at the end of the tunnel, the light that would allow us to actually leave our home, the light that teased a time in the not too distant future where Elliott would be past the toddler stage and before the teenage stage where things like alcohol, drugs, dangerous activities, and driving would cause me more stress, we could perhaps take a small step back and relax. And after actively parenting 24/7 for two years, the simple thought that there was that light caused a high we had not experienced.

We rode that high, that feeling for a couple of weeks until July 4th happened. The Highland Park shooting that occurred at the parade happened just eight miles from our house, in a town we have often been to, where we have had and still have family and friends, in a parade that if we had felt comfortable going this year, we might have attended since the schedule better lined up with Elliott’s nap schedule than our own town’s parade. As I saw all of the chaos, injury, and death unfold, I felt those same feelings that I felt with Sweet Pea and Colette.

How could I protect my kids? How could this happen?

I’m going to wake up from this and it’s all going to be a really bad dream. Was the life we have led over the last two years of avoiding large events, of cutting ourselves off from others, going to be our way of life permanently? How do we protect Elliott in a world that seems less safe each day?

As the aftermath of the shooting occurred and we feared that the gunman could end up in our town, we agreed that Elliott would not be going outside and held our breath until we knew he was in police custody. In the middle of it, my mom called me and shared what she had heard a security expert say during an interview. He had said that he was a dad and that his kids did not go to large events like parades, concerts, baseball games, etc. because he saw these as too dangerous. Immediately, I told my mom that we would not be doing that, that a life where Elliott could never go to these types of events was not a life we wanted our son living. But, at the same time, in a world where the worry, fear, and panic is high for every parent, let alone those of us parenting after loss, I understand the reasoning behind this take.

I cannot imagine that Mark and I as huge Cubs fans, would never take our child to a game at Wrigley. I cannot imagine that my dad, Elliott’s only living grandfather, who introduced me to the Cubs and fostered my love and devotion, would not want to sit with his grandson at a game and answer all of his questions about the game, questions that I asked once upon a time, like “What is a grand slam?” or “Why do the players do x?” or “Why do you love the Cubs so much even though they keep disappointing you?” (Confession: I still occasionally ask him some of these questions, although I’d like to think that my questions are a little bit more sophisticated).

And yet, I know that when we do take Elliott to his first Cubs game or parade or other large event, I will be looking at the best ways out in case of an emergency, where we can go quickly to get out of a dangerous situation. I know that as much as I will enjoy seeing him with wide eyes enjoying it, I will be scanning up and down and all around me to protect him. That scares me, that even before making a plan to take him, I am already thinking of escape routes and scanning to make sure things are okay, instead of just enjoying the time with my son.

But, as I have learned and continue to learn, this dichotomy keeps happening in parenting after loss.

Will I ever feel like it is safe? I now know the answer is clear: no, or at least not as long as my heart is still beating. Whether it is a global pandemic, a mass shooter, him hanging out with friends we would rather he didn’t, or sneaking out of the house, we will always worry because we are parents and we will especially worry because we are parents who have experienced loss.