When I think back to what I was like in the early days after my loss, I barely recognize that person. I have grown and changed so much in the seven-and-a-half-years since my second child, Zachary, died in my arms moments after birth.

At dinner tonight, my daughter Hannah pulled out a question card from our dinner party game and she read: “What was the moment that most profoundly changed your life?” My husband and I both answered in unison: giving birth to our first child (Hannah), AND losing Zachary.

In April 2017 I published Expecting Sunshine: A Journey of Grief, Healing and Pregnancy After Loss (She Writes Press). When I go back now and read the first chapter of that book, I can sense the sorrowful, anxious, and broken person I once was. I am immensely grateful that I emerged out of that dark season, and in one piece – so grateful. When I re-read that chapter, called “Conception,” I can clearly see how far I have come.

This journey of grief, which continues throughout and even after pregnancy after loss, is transformative. I want to share with you the “Conception” chapter, at which point in my story I do not realize I am pregnant with my rainbow baby. That rainbow is now five-and-a-half years old, and his younger brother is a boisterous two-years.

I encourage you: reflect on where you were and where you are now. I bet you are stronger, braver, and more resilient than you ever dreamed you could be. Sometimes its valuable to take stock of our journeys and pause with gratitude.

Sending love and strength your way,

It was September 2011 and the last photography job in my Year of Distraction. Nearly twelve months before, my second child, Zachary, had been born and, without even a breath, had died in my arms. As I stood in the hundred-year-old Greek Or­thodox church as wedding guests slowly seated themselves for the upcoming ceremony, I could not allow myself to think of Zachary; I was the photographer and had a job to do. Yet, as I aimed my hefty Nikon up to the gold-leaf dome that buttered the walls and marble altar in an unearthly sunshine, all I could see was Zach­ary’s face.

The light refracted into my eyes, and for a moment I could see nothing at all. Then my son’s face returned. His smooth, taut skin. His purple lips.

On the day of Zachary’s birth, his swollen cheeks were freck­led with the telltale marks of Tuberous Sclerosis Complex. The doctors assured my husband, Aaron, and me, after nine weari­some months of genetic testing following Zachary’s death, that randomness, not an inherited gene, was to blame. Still I crucified myself with guilt and survived only by stepping into my Year of Distraction intentionally, working like an addict to curb my brain from wandering to the god-forsaken randomness.

During that year I booked wedding photography gigs for ev­ery Saturday and Sunday and filled the weekday evenings with portrait sessions and commissions. I snapped thousands of pho­tographs in that time, filling the visual palette of my mind with grinning families, brides with lash extensions and parasols, cou­ples entwined in love and others in lust, and the living babies with marble-round eyes who smiled at me and smacked pink gums as I crowed like a rooster to earn their attention. All the while I was also Mother to my firstborn, my spirited and charming Hannah, as she approached and passed her first birthday.

Look, I said to myself. You are in control. This can’t touch you. With the goal of distraction, I was relentless. There was no time for sorrow.

The carpeted aisle of the church muffled the click clack of my work heels, but I wouldn’t have heard them anyway. My breath was loud in my ears. Blinking hard, I reviewed the list of family por­traits to be taken following the bride and groom’s I dos. I thumbed, rolled, and folded the paper nervously until it became smooth as fabric. The bride was still en route, so I lingered among the guests, waiting for genuine flashes of emotion and perfect angles—the decisive moment, as famed photographer Henri Cartier-Bresson termed it. My muscles were tense and ready as I slowly strolled the aisles past sixty rows of glossy oak pews.

“Maybe you should slow down,” Aaron had said months before as the stress of work fractured my sleep each night. “Just in case.” He looked down at my chest as if seeing through my blouse and freckled flesh and wide ribs to my heart. An unforeseen result of the genetic testing was the discovery of my enlarged heart, which, like Zachary’s condition, was diagnosed as random. There was no treatment plan, no next steps, no answers; the cardiologist simply fanned through my test results and shrugged. I would have accept­ed the diagnosis of a broken heart, but that would have required an examination of my soul.

At the beginning, I ignored Aaron’s concerns about my health, barely hearing him above the anger that deafened me to his voice. He returned to his teaching job one week after our son died, just a few days after Zachary’s memorial. “I can’t stay, I have to go back to work,” he yelled as I cleaved to him.

“I need you. Please. I can’t handle this. Please stay with me,” I begged through the lightning-sharp storm of sorrow.

The memorial flowers thrived in vases throughout our home for weeks until they, too, died, and still Aaron was a ghost to me. His side of the bed was cold when Hannah called me from sleep each morning. His breakfast dishes were put away, the counter wiped; he left no trail of crumbs for me to follow. He stayed late at the high school where he taught, coaching volleyball and texting me the score of each game as his team approached the championship.

Most evenings he did not arrive home until after nine and then eagerly recounted the events of his workday and the volley­ball game in the same gonging baritone as his father. But to me it was the monologue of a mime. I watched his lips, but there was no sound. Sitting motionless I became like the wall, the hunched lamp in the corner, the stained rug, as I too disappeared into my­self. I’m sure my breath did not even ripple the air between us.

Focus, Alexis Marie. Focus. Be professional, I huffed while exhal­ing, shaking my head lightly. Thankfully no one at the wedding seemed to notice—except for two small blue eyes that met mine and did not look away. A flaxen-haired baby boy snuggled on his mother’s lap stared at me, a bottle of frothy formula between his plump lips. I took a step in his direction. As I smiled at him he turned his pudgy body toward me, forfeiting his suction, and ap­praised me, full-faced like the harvest moon.

The boy’s gaze drew me another step toward him, and I was startled when he raised his tiny hands in my direction. The gesture was unmistakable: Pick me up, he cooed. His mother excused herself from a conversation to look at me, confused. “He never does this,” she said, letting me collect her baby in my arms. His features were fair, like Hannah’s. He had her gem-blue eyes, pearl-colored hair, and creaseless skin flushed with curiosity.

“He will be one in October.”

My large heart swelled. “Wh . . . when in October?” I gulped and closed my eyes.

Just a few weeks before that wedding, my Year of Distraction had fulfilled its purpose: busyness. I was dog-tired and no further along in my grief than the day I’d left the hospital with empty arms. When Aaron again suggested a slower pace, the inky-black bags beneath my eyes spoke up without permission. I gave in, imagining quality time with Hannah and starting to paint for myself—an act I had outlawed after Zachary’s death for fear of what anguish might subconsciously take form on the canvas. I was ready to end my Year of Distraction and canceled each upcoming booking, returning every deposit and cloaking my calendar in a crusty layer of White-Out.

“October 24,” she answered loudly as the sanctuary echoed with the laughter of boisterous guests parading in their suits, autumn dresses, and polished shoes.

Zachary would have been two weeks older than the child in my arms. Is this what my son would have looked like? I passed the baby back to his mother, and he hungrily resumed his lunch. An usher touched my arm and whispered, “The bride has arrived.” 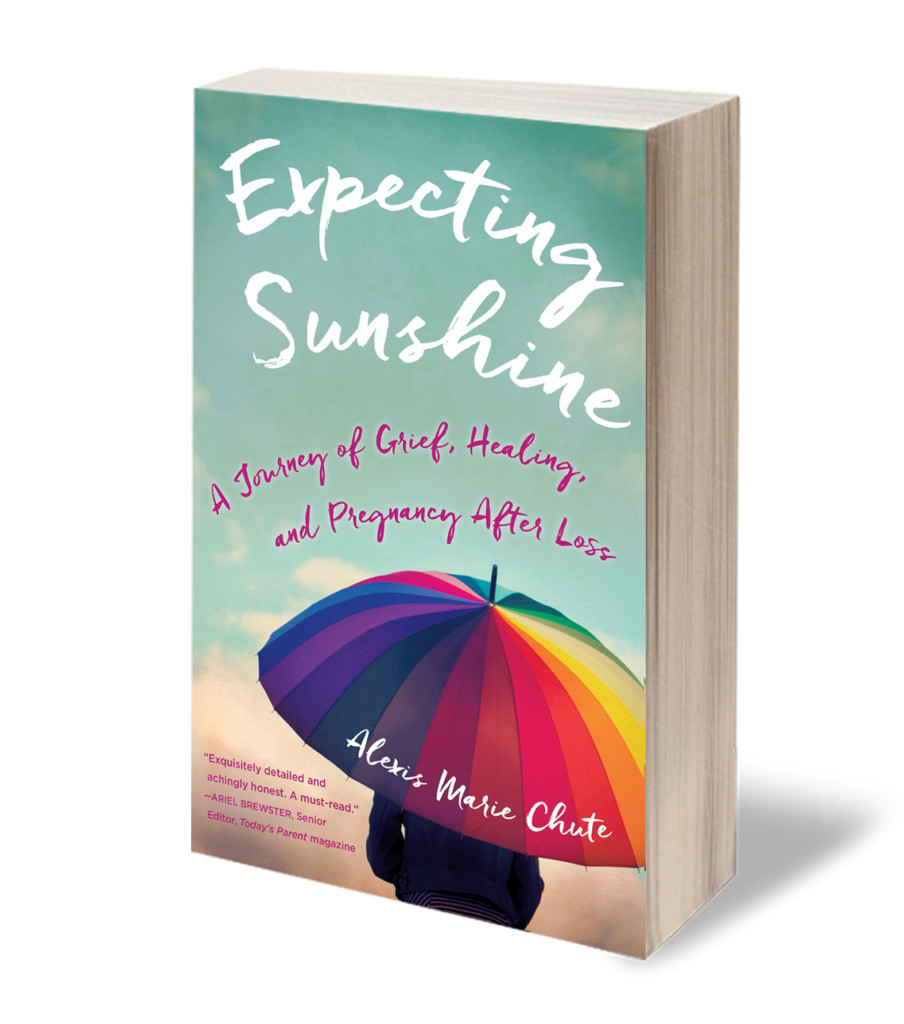 Learn more about Expecting Sunshine: A Journey of Grief, Healing and Pregnancy After Loss