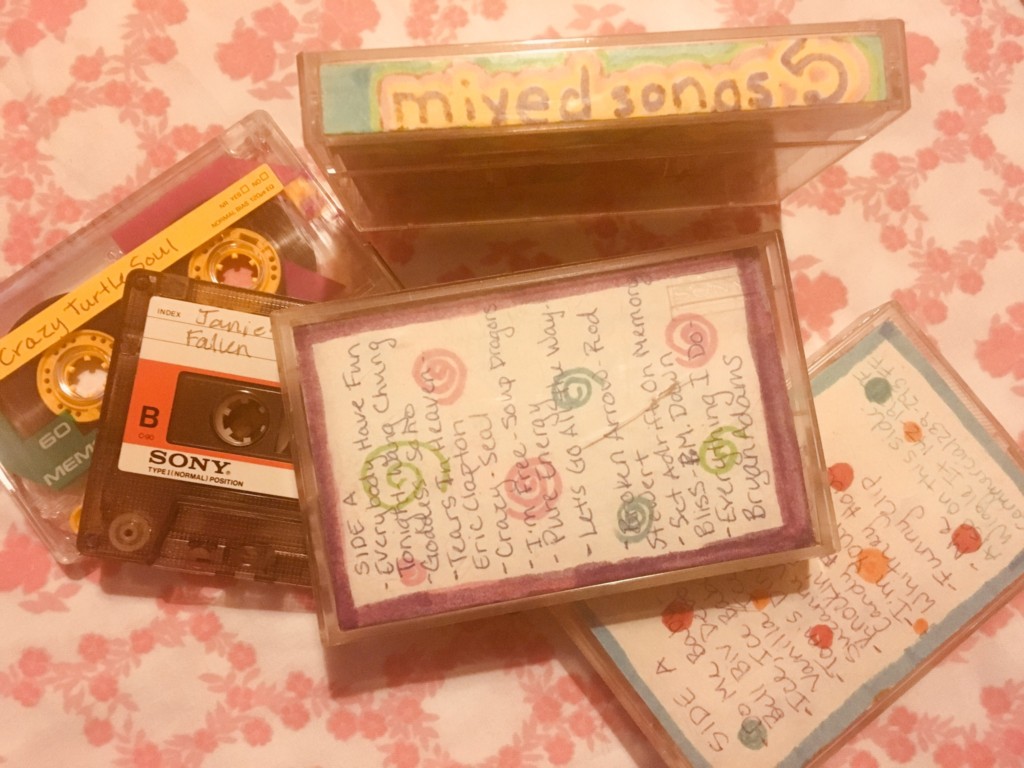 These are authentic nineties mix tapes pirated from the radio. Some of my earliest design work on the cases – I was always good with highlighters.

All my emotions as a teenager were funneled into mix tapes. Actual tapes – I was a teen in the early 90’s. (Did I mention I am of an advanced maternal age? Also known as “elderly primigravida”? Because I am! So elderly!) My dearest wish as a child having a custom movie soundtrack playing in the background at all times. I picked a theme song to sum up each year of my life for decades. When I become close to someone, I made a playlist for or about them. I also do it when I lose someone, including my two very dear, legitimately elderly cats I lost this summer. I even go so far as annotating them if I really need to be specific why the song is perfect. I am diligent about assigning songs to important beings and big moments in my life, it is a short cut for me to identify and articulate my feelings.

In September of 2015, when I was waiting for my body to catch up to the news that my baby’s heart had stopped, the Green Day song “Wake Me Up When September Ends” played over and over again in my head. My second pregnancy started around the same time frame as my first. Too many things felt the same, including the Arizona summer weather, and realizing I would be pregnant during my first anniversary of my first loss was both a relief and a betrayal. I didn’t make it to September with that pregnancy. When September came, I focused on the memory of my first loss, the baby I had connected with. In the end, as much as I would have loved to stay pregnant, I am grateful that I could do that on the first anniversary.

Summer is long here in Arizona, in fact some people would say even in November it is still summer here. After 20 years of living here, even though I grew up in the midwest, fall still exists as soon as October hits. I realized with this pregnancy, my previous experience with pregnancy had been in the summer. When I discovered I was pregnant on Halloween, I was instantly grateful for this new time frame to experience pregnancy in. I was also afraid of potential anniversaries that may come out of it, but I think being a mother of loss is having all kinds of secret anniversaries that we observe quietly.

The dates of this pregnancy are different, but the path is still the same, and I recently found myself obsessing about what day of development did each thing happen on in my previous pregnancies, so I could figure out when I was past those points. I expect I won’t be cured of my early loss anxiety after that, and I expect I will be freaking out well into the 2nd and 3rd trimester, but until I get past these personal milestones I have hard time even picturing possible future milestones. My calendar only includes pregnancy information through the next doctor’s appointment, because I never again want to go through any calendar and delete milestones like I did with my previous pregnancies. It keeps me in the moment, keeping hope alive for today.

Keeping hope alive every day is exhausting. Combine that emotional labor with the fact that I am exquisitely fatigued by being pregnant, I truly want to sleep through the next month or so. Normally my circadian clock is pretty broken and I struggle with insomnia. Being able to fall asleep at 10 pm is so luxurious to me, and I love waking up well rested. That only lasts about 2 hours right now, but sleep feels so beautiful to me that I don’t even care. It is a magical confluence of my coping mechanism and my body’s actual needs, who am I to question it?

So, as the song goes, “Wake me up when December ends, Ring out the bells again, Like we did when spring began.”

If you want to hear the playlist I made while dealing with the second pregnancy and the loss, you can check it out here:

About the Author: Nina Miller

Nina Miller lives, plays and works in Phoenix, Arizona with her husband, Jose Gonzalez. She is vocal about mental health destigmatization and personally struggles with depression, anxiety and ADHD. Pregnancy and baby loss have been present in her life for as long as she can remember. Nina was her mom's 4th known pregnancy after a series of losses between her brother, Marc, and herself. In addition to those losses, her eldest brother, Michael, was born prematurely and was with them for one day. After Nina's first loss, she found herself not comfortable speaking about it but realized that she couldn’t survive the grief alone. Three losses later, she is so grateful to every woman that has shared her story, either publicly or privately, and her mother has been a great role model and comfort throughout. Her first loss was a missed miscarriage discovered at 9 weeks after they saw the heartbeat the week before. After opting for no medical intervention, her body took 11 days to miscarry. Less than a year later, she was pregnant again, and at 8 weeks it was discovered to be anembryonic. Six months after that, there was a chemical pregnancy that ended on Christmas Day. After a bit of a break from trying to conceive, she is pregnant once again and is here to talk about it. Helping to build a social script for pregnancy loss and pregnancy after loss makes all the vulnerability worth it. In addition to working as a graphic designer, Nina finds joy on stage as an improvisor, finding what is funny in the truth of being human. She lives life like it’s an improv scene, trying to say “Yes, and” to the world even when it is hard.