From my first to my last… 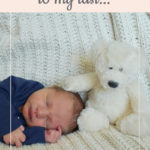 The other night, I rocked my one-month-old baby while we listened to “Godspeed (Sweet Dreams)” by Dixie Chicks, one song on the lullaby playlist all my kids have listened to almost every night since they were born. My daughter (5) sang along as she pet her baby brother’s head:

“My love will fly to you each night on angel’s wings.” 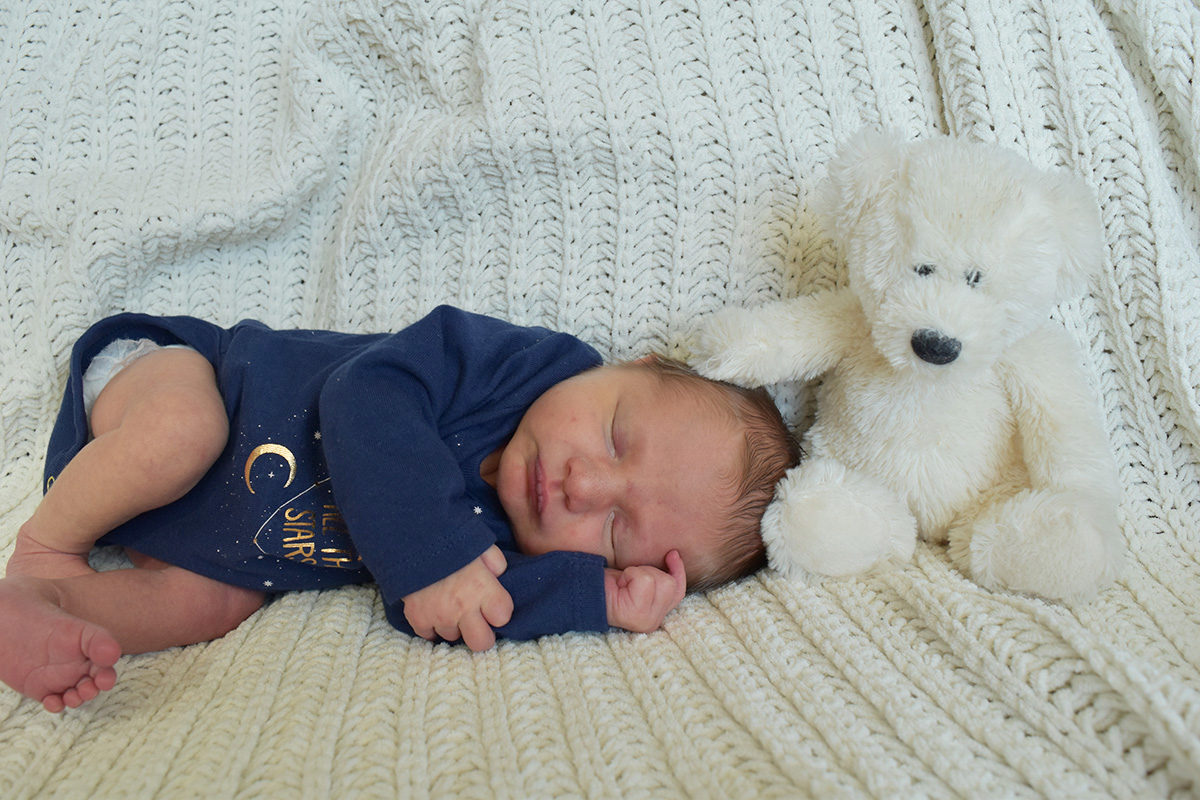 My eyes welled up with tears. Because I hope it’s true. I hope she’s with him too. His oldest sister. The one he’ll never meet, but whose story is inextricably linked to his.

She was my first. He’s my last.

Almost nine years apart, the outcomes were so different. Yet, in so many ways their stories feel so similar. They were both early. Both preemies. He lived. She didn’t.

Early in the morning on Mother’s Day in 2010, I woke up to contractions and pressure. At 20-weeks gestation I just assumed I was having gas pains or suffering from constipation. I thought going to the bathroom would help relieve some of the pressure I was feeling. But then I lost the mucus plug, though I didn’t know that’s what it was at the time. It was my first pregnancy and I hadn’t gotten to take the birthing classes yet. I called the doctor who told me to come to the hospital to be evaluated. I tearfully told my husband that we needed to go to the hospital.

Early in the morning on March 14th of this year I woke up because of contractions and stayed up because I was afflicted with third trimester insomnia. At 36 weeks, I knew these could just be Braxton Hicks. They weren’t quite regular yet and they weren’t painful. Still I went to the bathroom thinking the contractions were exacerbated by a full bladder. But then I lost the mucus plug. Being my fifth pregnancy, and expecting my fourth take-home baby, I knew I needed to get to the hospital right away.

My labors were quick and we couldn’t wait. I excitedly told my husband we needed to rush to the hospital.

At OB triage in 2010, my doctor checked my cervix and told me I needed to be admitted. I was 4cm dilated. Enough for the baby to come. We’d try to stop the contractions but he was scared for us and the baby. We got set up in the labor and delivery room.

At OB triage in 2019, the same doctor told me I was going to be admitted. At 6cm dilated, the baby was coming. Yes, 4 weeks early, but it was happening. And they wouldn’t try to stop it. We got set up in the labor and delivery room.

It may sound weird to those not in the pregnancy after loss world, but the beds were situated the same way. For my other three pregnancies, the beds faced south. For theirs the beds faced north. To be honest, it was the first thing I noticed when I got to the room to deliver my last baby boy; and that fact made me nervous.

After several hours in L&D on Mother’s Day 2010, it became clear that labor was not going to be stopped. Instead, we sat and waited to my baby to be born. No excitement from the medical team. Just condolences and comforting words.

Then they suggested breaking my water. We didn’t want to wait any longer. It would speed things up so I wouldn’t have to sit there in pain waiting for my baby to die.

After several hours in L&D on March 14th of this year, the doctor suggested breaking my water. “Let’s speed things up so you can meet your baby today.”  The nurse, who was new to deliveries, was beside herself. “This is so exciting!” she practically exclaimed. Everyone couldn’t wait to meet him.

A few pushes and they were both out.

She was silent. The doctor handed her to me and she didn’t move. 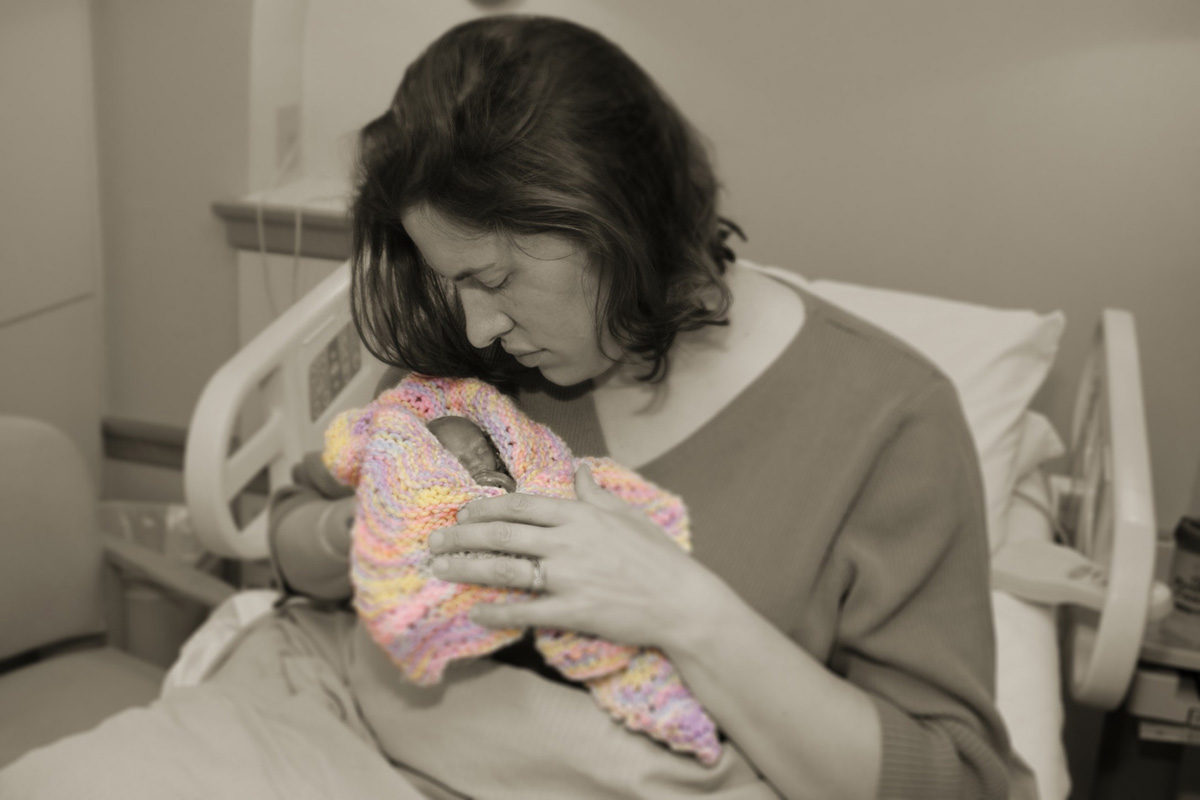 “I knew you were a girl. Everyone thought you were a boy.” I whispered to her as I snuggled her closer and cried.

He cried out. The doctor handed him to me and we cuddled his wiggling body up to me.

“You tricked me! I thought you were a girl!” I told him as I snuggled him closer and cried.

The day after Mother’s Day I was discharged and left the hospital empty-handed and brokenhearted. As I was wheeled out through the back hallway, I said out loud: “I would have been a good mother.” We climbed into my husband’s Jeep and took a slow ride home not really sure what would come next.

It would take the breath out of me to pass that little driveway and back hallway hospital door after the deliveries of my babies born after her.

In fact, after my rainbow baby was born, I asked my husband not to turn left leaving the hospital just to avoid that door.

The day before St. Patrick’s Day we were discharged from the hospital. We left with bags of diapers, baby wipes, breast pump supplies, a Halo sleep sack… and a little newborn all snug in his car seat. As I was wheeled out to the front door of the hospital, parked next to other mamas with newborns waiting for their partners to pick them up, I thought about how this was the last time I’d be leaving with a baby. And about how far we had come from that first departure after labor and delivery. We climbed into our new van, with room enough for my (now) four living children, and my husband turned left. I didn’t stop him. It felt okay passing “the door.” As we passed it, it felt like a peaceful nod to our journey in building our family. It ended where it began. 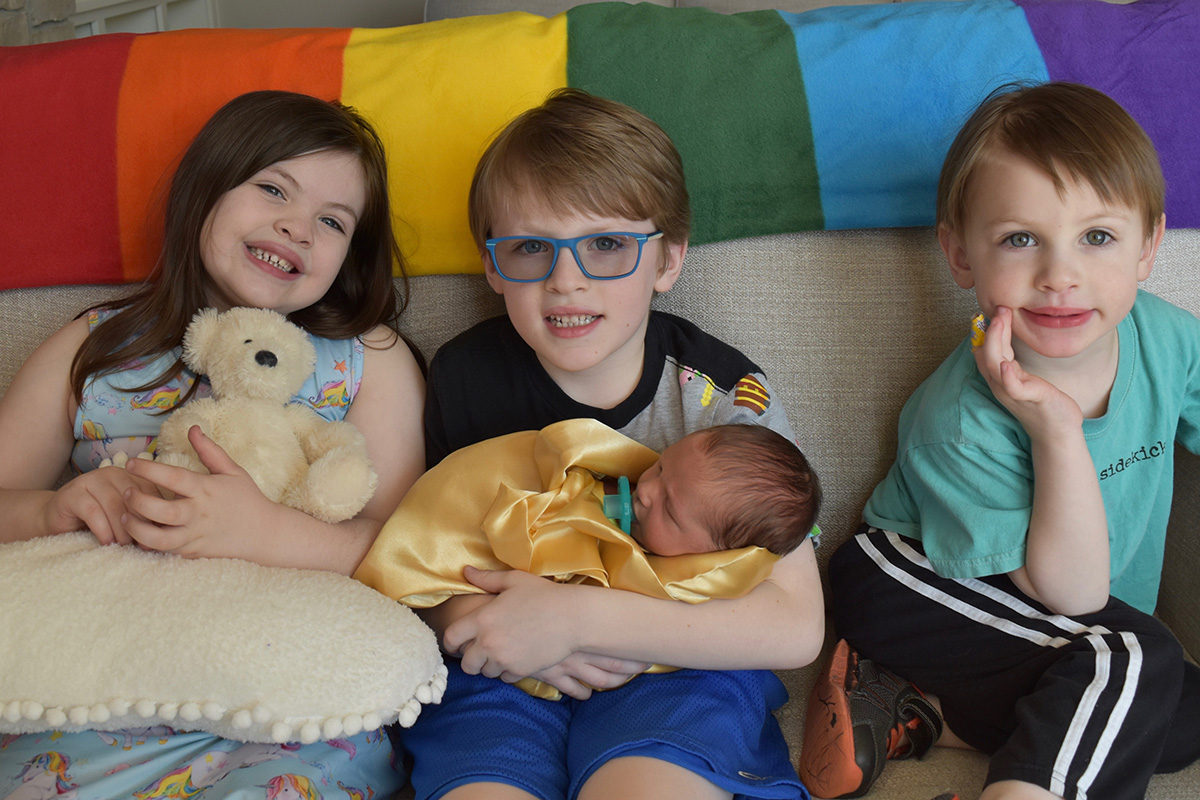 Today is Lily’s golden birthday. She’s 9 on May 9th. Jaxon’s my pot of gold baby. The treasure at the end of this rainbow pregnancies journey. My first baby and my last baby. Stories so different, but so connected that it all feels full circle somehow. The similarities in their stories make everything feel settled. Complete. And I never thought I’d feel that way.