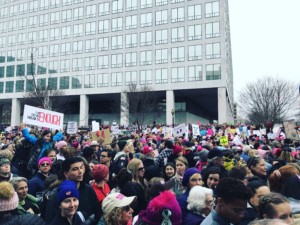 Editor’s Note: We at Pregnancy After Loss Support (PALS) know that we serve many moms from diverse backgrounds and experiences. The following is one mom’s experience of the Women’s March. This article may not resonate with you, and that is ok, but we will not tolerate any shaming or judgmental language in response to this piece. PALS is a safe place for moms who have terminated for medical reasons. ~Valerie Meek, Operations Director at Pregnancy After Loss Support

On January 21, my youngest child and I marched on Washington. She was all of nine months old. I might not have brought her were I not nursing, or were she on a bottle. I left her sister, my newly three-year-old daughter, at home. I was worried about a daring toddler in such a large crowd, but my littlest I could strap to my chest and hold. It didn’t mean I wasn’t worried—a crowd is a crowd. There are risks. When we are raising our babies after loss, we never imagine we would put them in any kind of harm’s way. But there are too many risks if we don’t resist. In my opinion, there is already harm being done.

While marches on Washington are nothing new, a Women’s March of this magnitude certainly proved to be. My baby and I were among the approximately one million people who were reported to have gathered around the rally stage at Independence Avenue and 3rd Street. Amongst the crowd, I saw many other babies, children, and generations united. I felt the energy of a peaceful protest, of the right to articulate our human rights. Around the world five million people marched and not one arrest was made.

Part of this movement is to share why you marched. I marched because rights I have held for my nearly 40 years are eroding. There is a very real possibility that under this administration my daughters will lost their Constitutional rights to reproductive freedom and therefore autonomy of their bodies, as is already happening state by state.

But I am not only the mother of two daughters. I am the mother of a son I lost five years ago and I marched for him too. I marched because in 2012, in California, my husband and I could make a decision as parents that we and his many doctors felt was the most humane for his fatally sick heart. In 2017, parents living in 16 states cannot make that same decision. As the Guttmacher Institute has reported, these last five years “account for more than one-quarter of all abortion restrictions enacted since Roe.” So I marched for parents like me of babies like my son. My advocacy does not mean I am not heartbroken each and every day that my son is not alive. My advocacy does not mean that I would make my decision for others. My advocacy means I do not want anyone else making personal, medical decisions for families already navigating their hardest hours.

This isn’t just about reproductive health or my personal pregnancy loss story. This is about a chasm of inequity I see growing between genders, races, and faiths in this country after decades of progress. This is about a room full of white men—three days after the Women’s March—making executive decisions for impoverished women around the world. This is about female and black and Muslim and gay lives mattering. This is about silence as complicity.

So I won’t be silenced. I won’t shy away or let fear win. Instead, I will resist. I will carry my 19-pound rainbow baby for seven hours in order to do so. I will nurse her with pride on the streets of our nation’s capital. I will hang a picture of where we stood in her room so she will grow up knowing she was there. I will raise her and her sister to believe—always—that they are enough, and that they deserve all the human rights and autonomy that I would have raised their brother to respect in them.