Life With Noah: The Room at the Top of the Stairs

A little over a month ago, we made the decision to move Noah from the nursery into his “big-boy” bedroom. While we are thrilled with how his new room turned out, and how much he loves it, the process of moving him stirred up so many emotions.

I was exactly 21 weeks pregnant with William (our late son) when I saw our current home for the first time. Because my husband had started a new job – and relocated – before we were able to sell the home we were living in at the time, he was viewing potential houses on his own. When he saw one particular house, he was so sure it was “the one” that I made arrangements to see it the next day (this involved some last-minute rescheduling of work commitments and an almost 4-hour drive). While I wasn’t initially as “this is the one” as he had been, one room sold me on it: The room at the top of the stairs. It was occupied by their youngest son. Painted the loveliest shade of pale blue, with beautifully-done stripes, it was a perfect match for the linens we had purchased for William’s nursery. The moment I stepped into that room, I could see it as William’s. We immediately put an offer in on the house, which was accepted mere hours later.

Less than five days later, we said hello and goodbye to William…

When we moved into the house a little over a month after William’s death, all of the things we had purchased/been given for him were placed in the room at the top of the stairs and the door was shut. The room that sold me on the house had become a symbol of everything we had lost. We hadn’t conceived of the idea that instead of bringing him home in our arms, we’d bring him home in a little blue urn with a silver teddy bear on it. All of the hopes and dreams we’d had for our miraculous little boy were tucked away in boxes in a room in which I would spend hours weeping in grief.

Eight months to the day after William died, we found out I was pregnant with our rainbow Noah, and a couple of months after that we began turning what would have been William’s room into Noah’s. William’s urn and memory box were moved into another room; the piece of artwork with William’s name was replaced by one with Noah’s. The linens that we’d loved so much, the ones that made me see the room at the top of the stairs as William’s, were placed in Noah’s crib. Instead of being a glaring reminder of what we’d lost, the nursery became a symbol of the hope of bringing home a living child. When we brought Noah home, we began dreaming of the day we’d move him into another room and imagined that it would probably happen when we found out we were pregnant with his younger sibling. 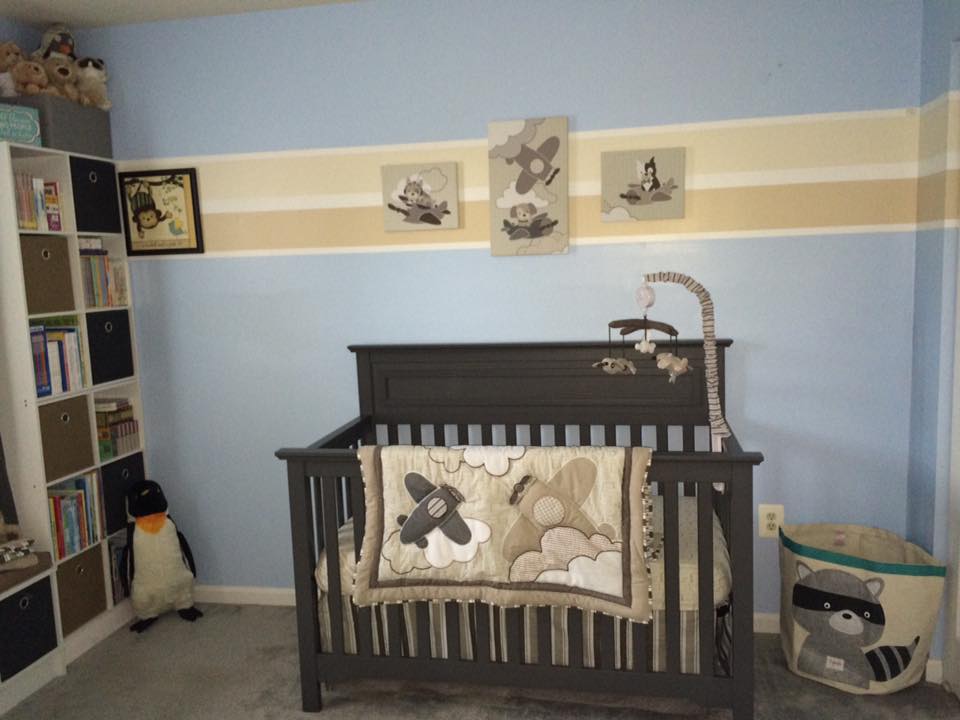 The room at the top of the stairs, after being prepared for Noah’s arrival.

As with so many things in our lives, however, things didn’t end up working out the way we thought they would…

When we moved Noah into his big-boy bedroom, it wasn’t to make the nursery available to a sibling. As much as it pains us, we know that it’s very unlikely that we will ever bring another baby into our home. What I’d imagined would be a joyous celebration was still joyous (how is our rainbow nearly three years old?), but there was an underlying current of sadness as well – emptying the room at the top of the stairs of Noah’s furniture was a reminder that, once again, the life we’d imagined living when we first looked at this house isn’t the one that we’re living now. We bought a house with enough rooms to accommodate the family we anticipated building, not one with only one living child.

There is definitely still a measure of happiness in all of this, though. The linens we loved so much – along with much of Noah’s baby gear – will be given to a dear friend who I met through the loss community. She also lost a little boy, and is pregnant with another little boy. It brings me great comfort knowing that many of my rainbow’s things, some of them initially purchased for William, will be used by her rainbow. All of Noah’s other gear and toys/clothes he’s outgrown will be donated to a local pregnancy crisis center, where they will be given to mothers and babies in need. I could think of no more meaningful thing to do with them (somehow, the idea of trying to sell everything just made me sad). 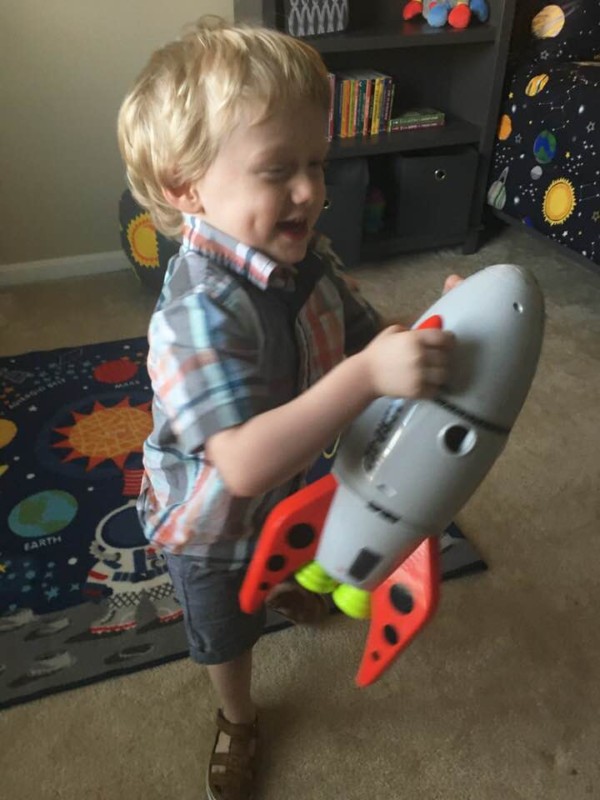 Noah, roughly 5 seconds after running into his big-boy bedroom for the first time

For the time being, the room at the top of the stairs is a jumbled mess of things moved from other rooms to facilitate the creation of Noah’s big-boy bedroom, as well as all of the stuff we’ll donate. It’s no longer a nursery, and most likely won’t be again for as long as we live in this house. But even when life doesn’t look like you’d always imagined it would, it can still be full of love and joy – like the look on your rainbow’s face when he sees his big-boy bedroom for the very first time.