A little over a week ago, someone in my MOMS Club posted something about a Mom’s Day Out program at a local church.  For a moment, I got really excited about it: Once a week, for either a half or a full day, I could take Noah to the church and he would do crafts, play, have music time, and more.  And I could have either a half or a full day of whatever I wanted (or needed) to do.  Sounds great, right?

And then it hit me: I’d have to leave Noah there.  Without me.  Without my husband or his Granny and Poppy (my husband’s parents, who live near us).  And suddenly, it sounded more terrifying than it did exciting…

Noah’s a little over 13 months old, and he has never (except when he was in the NICU) been in the care of anyone but myself, my husband, or my in-laws.  Not even once.  I’ve only been away from him more than a few hours on a handful of occasions: To work at a day-long STEM festival (for my job with the university) last Spring in D.C., another festival June, for our anniversary in September.  Since I work from home the vast majority of the time, I’m with my son nearly constantly, and I am so grateful that I am able to do that.  I recognize how incredibly fortunate I am that I am still able to do a job that I love to do – albeit in a reduced capacity – and be able to take care of my son.

I’m wondering where my fear of leaving Noah in someone else’s care comes from.  Is it Normal-Mama* fear, is it Loss-Mama fear, or is it somewhere in between?  Would I be as hesitant to leave Noah in someone else’s care if I hadn’t lost his older brother?  Would I worry about him as much when I’m not with him if I wasn’t living without William now?  There’s no way I’ll ever know, because I’ve never parented a child *before* losing a child, and that’s difficult for me to wrap my super-analytical head around.  I don’t know what it is to be a Normal-Mama because I never had the chance to be…

I know that I’m eventually going to have to leave Noah with someone other than the few people he’s been in the care of thus far.  My rational brain says that I need to let go of some of my fear – wherever it’s coming from – and become more comfortable with the idea of my son not being in my care.  I’m struggling deeply with wanting to go to an event I’m planning for February 2017 at the university because it would mean leaving Noah with my husband overnight (we now live 3+ hours from campus): My husband is an amazing father and is more than capable of caring for Noah on his own, and it’s not practical (at all) for me to bring Noah with me.  But the thought of being 3+ hours away from my son, of not seeing him for 24 or more hours, is filling me with so much apprehension, and not being able to rationalize why is driving me batty.

One thing that I am very grateful for in all of this is that I know I’m not alone in feeling this way (to at least some degree).  I asked the other MOMS members when they felt comfortable leaving their little ones with non-relatives, and many of them responded that it was when they were older than Noah is now.  Knowing that didn’t alleviate my fear about leaving him, of course, but it did make me feel like maybe this is something that a lot of mothers feel, regardless of whether they are also a loss mother.  And there’s comfort in knowing that I’m not alone in my fear. 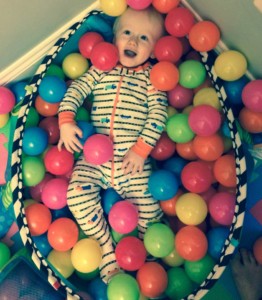 I’m crazy about this little guy. Here he is in his ball pit, which is one of his favorite places in the world to be. Look at the joy on his sweet little face!

* I sincerely hope that no one is offended by my use of the term Normal-Mama.  I struggled with finding the “right” term to use, because being a Loss-Mama is my normal, but in the end I went with it because I couldn’t come up with anything better.