Ten months old.  Seems like just yesterday he was the itty-bitty guy laying in an isolette in the NICU, a respirator helping his not-quite-ready lungs breathe.  Now he’s long, lean, and most definitely keeping us on our toes.

The past couple of months have been full of milestones.  The little boy who was barely crawling in July is now zipping around the house at a speed I sometimes find quite remarkable; he’s now very close to walking as well.  He now calls Mama and Dada by name, the latter occurring just last night (I thought my husband was going to melt – we’ve had the Mama thing happening for quite awhile).  He’s a voracious eater who wants to try everything Mama and Dada are eating; I frequently get asked “How did you get him to eat (some particular food)?” and all I can say is “We put it in front of him and he eats it.”  He loves it when we read to him, loves watching Team Umizoomi and Bubble Guppies, loves going to the mailbox to meet the mailman/woman (who delight in passing the mail to him – I think his big, four-dimpled grin makes their day). He’s still not sleeping through the night (not even close), but he’s a really happy little boy and we love him like crazy.

Now that he’s getting a little older, Darrell and I have really started thinking about growing our family.  As anyone who has been following our story knows, having children is anything but easy for us; truthfully, we do not know yet if it is even medically-safe for me to carry another baby (due to the complications I experienced during my pregnancy with Noah).  Being Noah’s Mama and Dada has been such a profoundly amazing experience, though, and we know that we would love to give him a little brother or sister (or two – we have two embryos remaining, one from the IVF cycle that resulted in Will and the other from Noah’s cycle).  We’ve reached out to the medical team who oversaw my pregnancy with Noah to let them know that we’re ready to check on the status of my TAC (which was displaced) and uterus (which may have been damaged due to the TAC displacement), because before we get serious about planning a frozen embryo transfer, we need to know if it’s even safe for me to be pregnant.  In the meantime, I’m working on getting in shape, losing some weight, and making sure that my health issues are being appropriately managed.  And, of course, loving the heck out of watching Noah grow.  Being Noah’s Mama is my most important job. 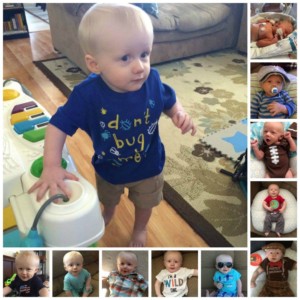 Noah Matthew, monthly, from the first time I saw him in the NICU (upper right) to now. 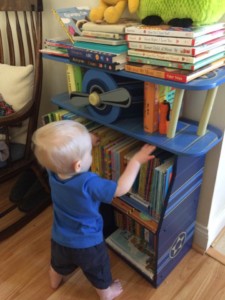 He loves it when we read to him. Earlier this week, I asked him if he wanted to read with Mama – he crawled over to his bookcase (well, one of them… we’re big on books around here) and picked one out.