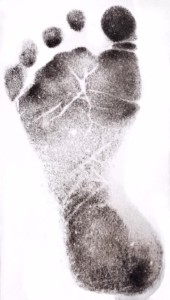 35 weeks. I’ve learned by now that this is about the time that you start thinking baby could come anytime, even though you know they need a few more weeks. So close, every kick feels like they’re working their way out, every cramp you wonder if it’s a contraction.

So when Layla dropped a few days into her 35th week, I got excited. She was getting ready. And then, the next day, the contractions started. But she was quiet – too quiet. I called my OB and headed in, convincing myself of the old wives tale – that babies slow down for labor. I wavered between excitement that she was coming and concern that she was too early. Never for a moment that she wasn’t alive.

But she wasn’t. She was gone. I thought she was coming to meet us and she was, but nothing like we had dreamed of for the last 8 months. And when she was placed in our arms, so chubby at 6lb. 9oz., all I could say was – if she had only been born, she would have been fine.

And now, that’s what happens to me, starting today. Knowing my baby would be fine on the outside, in my arms, safe. Fearing what might happen on the inside. We don’t know what happened to Layla – she was perfect. Did she compress her cord when she dropped? What else could it have been? Would an extra NST have caught something? Is there anything at all we could have caught? And the answer is an unfortunate no.

About the Author: Laura Malcolm

Laura Malcolm is the proud mother of Layla, who was stillborn at 35 weeks in November 2013, and Diego, her little brother born in November 2014. After Laura and her husband James experienced coming home from the hospital without a child, they knew there had to be a better way to help direct families in how to most effectively give help, no matter how far away they were - and Layla’s legacy, Give InKind  was born. Laura and James now run Give InKind, while parenting an active toddler and preparing for another rainbow to join their home. You can follow the Give InKind journey on the web, Facebook, Twitter and Instagram.