Laura’s Bump Day Blog, Week 33 – Is It All Uphill or Downhill from Here?

This last week started the routine I became so familiar with in my first rainbow pregnancy. Weekly visit to the MFM, onto the monitors, drink some ice water. I’ve learned to read the strips, I joke with the nurses – I like my new MFM’s setup, in a room with several other NST chairs and the nurses right there, laughing as my baby boy rolls around or gets the hiccups. It’s much less lonely than the MFM’s office where we monitored Diego – that was a quiet single room where I’d sometimes close my eyes to the sound of his heartbeat, catching a few minutes of shut-eye.

By this point in my pregnancy with Diego, my weeks were filled with appointments. Besides the NSTs, there was weekly therapy (alone and group), acupuncture, chiropractic, massage as often as I could. I was at an appointment every day – I took the medical deduction for mileage on my taxes that year. I was a wreck. Because 33 weeks is getting awfully close to 34 weeks. And 34 weeks is practically 35. And 35 is when we lost her. I don’t know exactly which day. I was 35+3 the morning I was told she had no heartbeat. So at 33 weeks with Diego, my anxiety was rightfully growing every day.

At 33 weeks with Layla, she’d also had an NST, before I knew what they were. I had called my OB that morning about a decrease in movement. He told me to head straight over to L&D where they put me on the monitors to find she was perfect. He met me there and when I apologized for being so silly, he emphasized to never, ever feel silly, and always to come in with any change in movement. He then told me a story of a patient of his that lost her baby, and reiterated that I should always come in. I left there and went to my childbirth class and retold the story with shock to my classmates that my OB would tell me such a sad story so far along in my pregnancy. I didn’t know then that just two weeks later, I’d look back on that day with gratitude, because in some tiny way, he prepared me, and I felt one iota less alone when it happened to me.

So 33 weeks starts our milestones. 33 weeks was Layla’s first NST. Soon, we’ll come to 35+3. Then 37+1, the day we induced Diego. Will I still be pregnant then? What will my next milestone be? I guess we’ll see, but it’s hard to tell whether things are getting harder or easier from this point forward. I can’t believe we’re almost there. 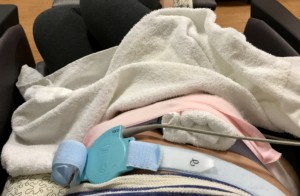 About the Author: Laura Malcolm

Laura Malcolm is the proud mother of Layla, who was stillborn at 35 weeks in November 2013, and Diego, her little brother born in November 2014. After Laura and her husband James experienced coming home from the hospital without a child, they knew there had to be a better way to help direct families in how to most effectively give help, no matter how far away they were - and Layla’s legacy, Give InKind  was born. Laura and James now run Give InKind, while parenting an active toddler and preparing for another rainbow to join their home. You can follow the Give InKind journey on the web, Facebook, Twitter and Instagram.