This time of year has so many anniversaries for Eric and me. October 9th, 2017 was Danny’s delivery date. Halloween is Eric’s birthday and the date we made our public announcement about our first pregnancy. November 13th is the anniversary of our first date (13 years this year, but I have been told there is no such thing as a Golden Date-iversary). Two years ago, on November 16th, we found out we had lost our first baby, Lentil, and we said our final goodbyes on November 18th, 2016.

I’m never quite sure which date to focus on as the important anniversary date for Lentil. The really traumatic date in terms of the pregnancy was when we found out we had lost him, but in that first year I felt very connected to his due date, March 31st, as a marker of him and his loss. This year I am aware of how different my reactions are to passing Danny’s loss date and Lentil’s loss date. I felt a significant amount of grief nearing the anniversary of Danny’s loss. I honestly don’t feel any more grief around the anniversary of Lentil’s loss this year than I do at any other point in time. We are always grieving them, even if the intensity comes and goes with time. 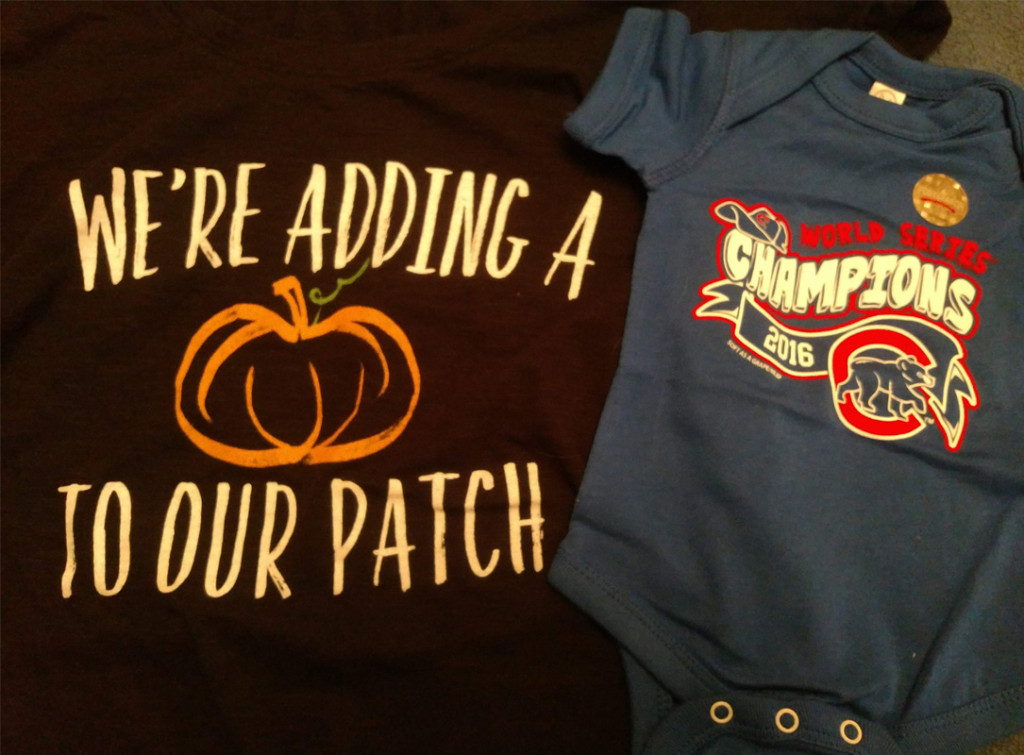 The shirt I wore in our pregnancy announcement for our first baby, and one of the last items we bought for him before we found out he had passed.

I often feel guilty for the discrepancy in how I feel about our two babies and how I react to the anniversaries surrounding them. As a parent (it still feels really hard to refer to myself as a mom), I feel guilty that my emotions give more attention and significance to one of our babies than the other.

There are many ways in which the losses of Danny and Lentil have been different. I sometimes feel guilty that I had a D&E with Lentil and chose to have his ashes distributed with the remains of other babies at a cemetery rather than bringing them home with us, as we did with Danny. But as I think back, I know that we made the right choice for us at the time. Delivering Lentil would have been torture for Eric and me. We were so shocked by this loss that we didn’t really know what to make of it. At the time it felt like we had lost a pregnancy, but it did not feel like we had lost a baby. We understood that that baby was never going to have been a healthy, living baby that came home with us. We just needed the pregnancy to be over so that we could start healing. We did what was best for us.

When I think back to what we experienced two years ago, I remember Lentil’s loss in connection with the other events happening in the world. We shared our news publicly on October 31st, and it felt so great to be able to celebrate this baby and our excitement with all of our friends in this way. Two days later, the Chicago Cubs won the World Series for the first time in 108 years. We celebrated by walking around our neighborhood that night and observing all of the people celebrating. We visited Wrigley Field with my dad to take pictures of the World Series Champions sign (including a bump photo) and the brick wall that had been covered in chalk by fans. Less than one week later was the 2016 presidential election. About one week after that is when we found out we lost Lentil, and that he had likely been gone for three and a half weeks.

It felt like the Cubs had finally won the World Series and somehow it turned our world upside down. 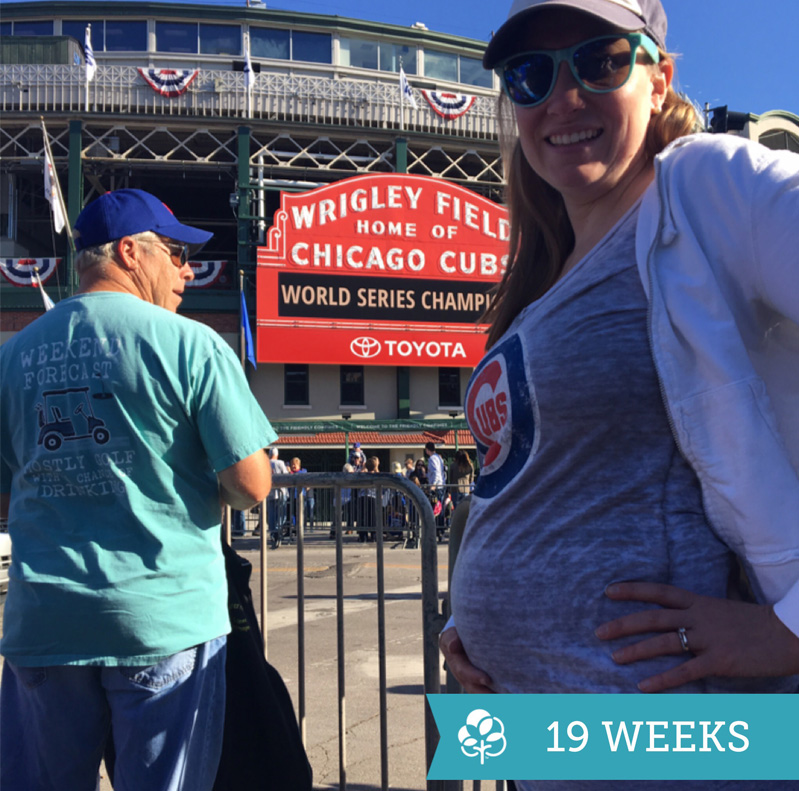 My second to last bump photo from our first pregnancy, celebrating the World Series win.

When I remember the trauma of losing Lentil, I remember the physical trauma and fear associated with hemorrhaging and receiving a blood transfusion. I remember how different that Thanksgiving felt. We were supposed to go to Minnesota to spend Thanksgiving at my aunt’s, but Eric and I were not in a physical or emotional place to travel. Instead, Eric’s parents joined my parents, my sister, and Eric and me at my parent’s house. It was exactly what Eric and I needed that Thanksgiving. We did not need to celebrate or be pushed to think too hard about what we were grateful for. We just needed to be surrounded with family who knew how much we were going through. My mom even made cheeseburgers for Thanksgiving dinner for me because I had mentioned that we could eat cheeseburgers for all I cared.

Every day between Lentil’s loss and his due date was a reminder that I was no longer pregnant.

I spent those 19 weeks comparing myself to other pregnant women in terms of how far along I would have been and how close we were supposed to be from adding a baby to our family. When Lentil’s due date came, Eric and I spent a weekend away, acknowledging that it was a difficult time for us and mourning the baby that we didn’t get to bring home that day. By then it felt very clear that we had lost a baby. We were mourning the joy of pregnancy that it felt like everyone else around us was able to have. We were mourning our first baby and the dreams we had for our lives with this baby.

Passing Lentil’s due date gave me a significant amount of closure regarding his loss. Our grief wasn’t gone, but it felt like it was okay to move forward and to begin looking ahead to the possibility of a second baby.

This weekend I found myself struggling to remember what Lentil’s loss date was like for us last year, at the one year mark. It finally clicked for me that one year after Lentil’s loss we were only 5 weeks past Danny’s loss. We were in the immediate depths of grief, still struggling to get through one day at a time. We were grieving both of our babies and this new place that we were in, knowing that this loss was not a one time, random “bad things happen sometimes” occurrence. Instead, it was genetic. It had been bound to happen to us at some point. At that point we knew we likely had a 25% chance of losing each baby we conceived, but we still did not have a specific cause. It wasn’t until January that we got the test results informing us of the FOXP3 mutation and IPEX syndrome.

So one year ago, we were not just mourning Lentil or even Lentil and Danny. We were grappling with what a rough journey we were on without knowing how much more we would have to endure. We were wondering whether we would have children that were biologically both of ours.

We were contemplating how many more babies we could handle losing at 20 weeks in order to get to our rainbow after the storm. 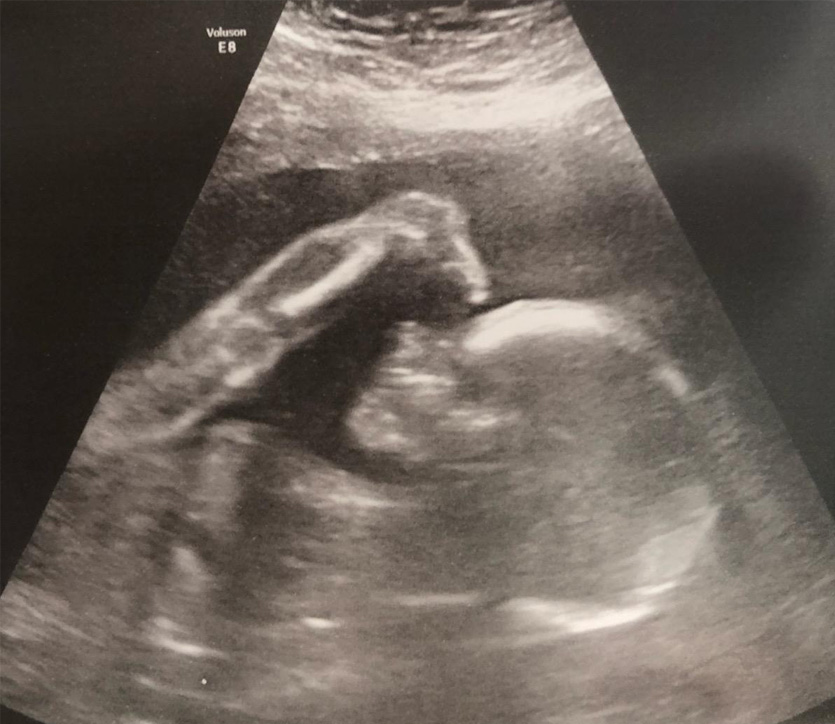 Our third little one doing some big stretches during our most recent ultrasound.

Two years ago, we would have never believed that we would still be trying to get to our rainbow baby now. One year ago, we would have been overwhelmed to hear that we would get an answer and that I would be passing these dates 25 weeks pregnant with what appears to be a healthy baby, currently estimated to be 1 pound, 11 ounces. It seems that we have reasons to be hopeful that one year from now we will be in a very different place, but it is still hard to feel confident about this. We are hoping that our storm is nearing its end, but the reality is that we will only find this out in time.