Anniversary. Birthday. Stillbirth day. The day I delivered him. I am not sure what to call it.

I am writing this post on Danny’s delivery date at 19 weeks, 4 days pregnant. Monday when this post is published I will be 20 weeks, 3 days pregnant and just a few days away from my anatomy scan with my third baby.

I have struggled with how to describe the day I delivered Danny for the entirety of the last year.

And here we are, one year later. I still don’t have a good name for this day. In the immediate days following his delivery, I caught myself every time I started to say that I gave birth to him. Is it possible to be born if you never lived? Is it possible to be born dead? I always associated birth with the start of living, the moment from which we measure someone’s age, the official welcoming of someone into this world. My brain doesn’t really know how to compute the idea of that same act connected with death, saying goodbye to someone, and the official end of any chance at life or hope for new life.

Medically, my experiences are diagnosed as intrauterine fetal demise at 20 weeks or more of gestation. After losing Lentil I struggled to know how to define my loss. Based on the typical definitions of stillbirth and miscarriage, my losses seem to fall on the cusp between the two. Miscarriage is defined as a loss before the 20th week of pregnancy. A missed miscarriage describes a miscarriage in which the baby is no longer developing and has no heartbeat but the pregnancy has not yet ended. Most often stillbirth is defined as a loss at 20 weeks of pregnancy or later. In some ways these definitions only confuse me more.

With Lentil, the missed miscarriage likely occurred around 17 weeks, but we did not know he was gone until after 20 weeks. I had a D&E with Lentil. I did not deliver him. I did not give birth to him. I feel like that makes his loss more of a missed miscarriage than a stillbirth. Danny likely passed just after 20 weeks. I did deliver him. I have been hesitant to use the term stillbirth with him because he wasn’t past the age of viability. The fact that both of my babies would never have been able to survive outside of my body makes me careful about the terms that I use. It doesn’t make our losses any less impactful to us, but I don’t want to use language that may take away from another woman’s experience. My “early” stillbirth (20-27 weeks) is different from a late stillbirth and a full-term stillbirth.

It is for these reasons that I feel in between. Not quite a miscarriage, not quite a stillbirth. Definitely traumatic pregnancy losses. Definitely significant grief and pain.

I recently read a post, I Need You to Know that My Stillbirth was Still a Birth,by Rachel Whalen, an author in the pregnancy loss community whose advocacy has given me strength and support over the past year. I have admired the way that Rachel gives voice to the emotions and experiences of others who are living after loss, pregnant after loss, and parenting after loss. Her writing made me think about the ways in which I am potentially diminishing mine and Eric’s experience by avoiding using the word birth. I experienced labor. Eric held me, helped me soothe my pain, and encouraged me throughout labor and delivery. I pushed our child out of my body, and we held him in our arms. 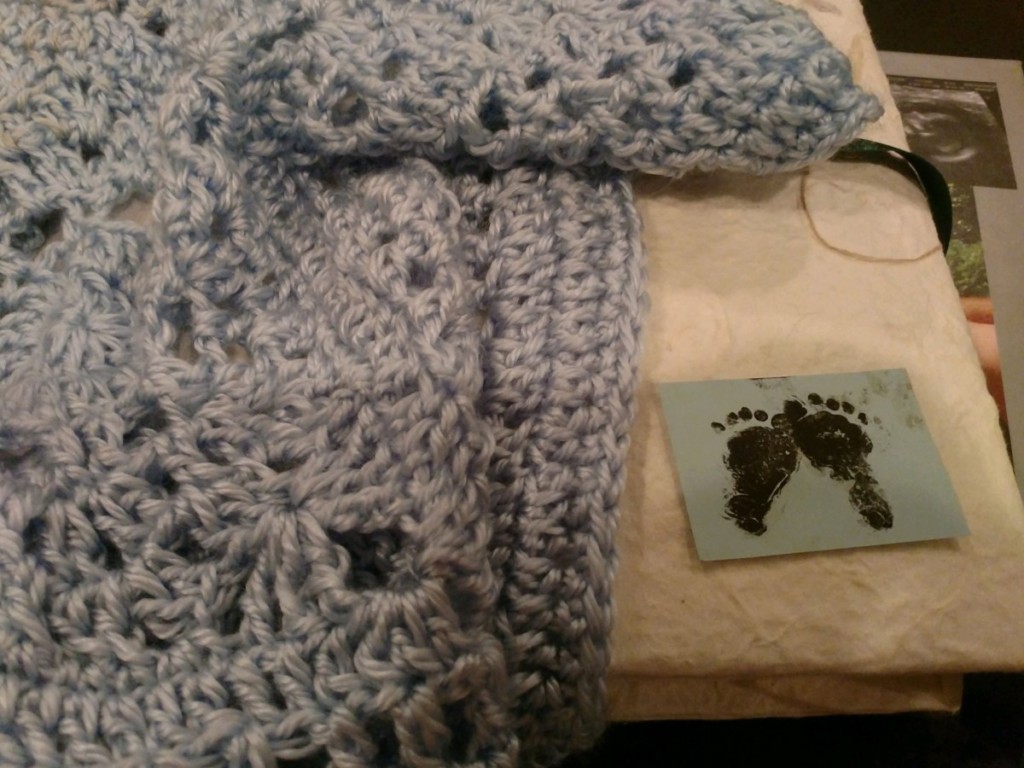 So perhaps I should be proud of the fact that October 9, 2017 is a day that I gave birth.

I am still not sure that it is a birthday. For people who are still alive, birthdays are celebratory. For those who have died, we see birthdays as sentimental, a time to remember and honor those we have lost. I suppose that is what today is. I am doing some of the same things that others might do on a birthday of their child. For the past two days, Eric and I have been talking about what we were doing at various moments one year ago. Those memories are all so clear, from hearing the words “I am not finding a heartbeat,” to going home for 36 hours and finding things to do around the house to occupy ourselves, returning the hospital for me to be induced, and the events of labor and delivery.

I can imagine talking to a living child about their birth story and the experience of anticipating their arrival. This feels so different. This feels like a death story, but it is both a birth and a death story.

Although I have very traumatic memories of those few days, I also have fond memories of them. My tasks felt very clear to me in those moments. I tried to savor some moments of the last day with our baby in my belly. It was less scary to me than it had been 10.5 months prior as I prepared to go in for my D&E with Lentil. With Danny, I was numb in the moments after delivery. I was tired. I felt relief from the physical pain and pressure in my body. I felt the side effects of the pain medication I had received, and I was just there, not feeling many emotions. But looking back, I have fond memories of my parents and Eric’s parents joining us in the delivery room to hold their grandson. I remember holding him, Eric holding him, and us taking pictures that I wasn’t sure we would actually want. Now I am so glad we have those pictures.

I don’t know if it makes it easier or harder that I also have another baby with me on this day.

In some ways it makes me more hopeful. It would be worse to feel stuck, to feel as though we had made no progress towards bringing home a living child. But it also doesn’t feel like a day where I can focus much on this life that is growing inside of me. I don’t have any room to feel excitement or fear about this one. I mostly feel focused on the life that we lost one year ago. Really, I wish we had an almost 9 month old, that we were preparing for his first Halloween, Thanksgiving, and Christmas, and that we were beginning to talk about what we wanted his birthday party to be like in February.

Today, Eric and I will take the time we need to take care of ourselves and focus on missing our baby. We will look at his pictures, flip through the photo book I made to document my pregnancy with him and his loss, hold his blanket, touch the stains on this blanket that are evidence of his existence, and examine the pieces of paper on which one of our amazing nurses captured his footprints. I will read letters from other loss moms in a book that I bought for myself last year. Eric and I will take our puppy for a long walk on this unseasonably warm October day for Chicago. We will get some cupcakes to treat ourselves and acknowledge that this is a hard day and a special day in a very confusing way.