Week 35 has taken an unexpected curve ball, in the fact that I’ve been admitted to hospital. All is well physically, but I was beginning to loose my grip. As I said last week, the anxiety was rebuilding. As a result, I lost my ability to trust any movements, myself or my faith in everything going well. At all.

In the space of about a week, we had two routine scans, two routine CTGs monitoring sessions, a midwife appointment, and two unexpected visits because of concerns over movements. Yet, my reassurance was lasting mere hours. Any period of silence was just too much, and it would start to build again.

The fear and anxiety results largely from the circumstances of Leo dying. The day before he was consistently active throughout, I slept, and then he wasn’t. Within the space of two hours of not feeling movements, getting anxious and going to the hospital, we discovered he had died. So sleeping, or any extended period of quiet is impossible to reason as acceptable in my head right now. How could I not act on any period of quiet, when I know how quickly a baby can deteriorate? Equally, how can I sleep soundly, when I know that deterioration can happen during the night without me knowing? And we all know what lack of sleep does to reason…

So ultimately, as a result of it all and a night of waking every 45 minutes to prod the baby to make sure he is still alive – my consultant offered me admission. Admission comes with twice daily CTGs and more if required. It’s been absolutely the best thing for us right now. The plan is to stay in until I am induced in little over a week.

The responsibility and pressure falling on me has been lifted somewhat. Whilst I wish I was able to cope, have a calm few weeks until induction, finish the typical nesting activities, and enjoy this time – I can’t. And if I’ve learnt anything through grief and pregnancy after loss, is that sometimes you just need to stand there, and say “I’m done” and give yourself permission to do whatever makes it easier.

I’ve been in since Tuesday, and everyone is just so caring and lovely. I’ve had a few wobbles – the anxiety is still there a little – but I can easily just wander down the corridor and listen to the baby for a while. This is compared to the build up of anxiety, deciding to go in, phoning and explaining what’s wrong, driving for nearly an hour and finding parking, the inevitable wait, then a CTG, and then travelling home and recovering from the emotional upheaval of it all – at any time night or day. To repeat it the next day… Well, being here is a worthy and welcome break from that intense pressure.

The need to make the right call at the right time, means you jump at any niggle. So I could imagine the upheaval, reassurance, and recovery cycle would have continued almost daily for two weeks. And that is not the best way to prepare for labour or a newborn.

It hit me though, as I packed my bag and stood in the doorway of the baby’s room, that all being well, I won’t return home until after he is born. Alive. And he’ll come home, with us. And that concept was rather huge. But I suppose, this is where procrastination is a helpful tool. We haven’t allowed ourselves to consider coming home with A Breathing Baby, and so I had about a single minute to consider it, and leave the house. Needless to say, that’s the moment I cried. I guess with the hard stuff, the quick and unplanned approach sometimes helps.

I worried that being in hospital could be quite triggery. At the start of pregnancy, I often mentioned that I’d likely get admitted for this reason. But I knew the hospital isn’t my favourite place, so it wasn’t going to become part of the ultimate plan. However, I feel okay. Ultimately I know we aren’t here in a “crisis moment” as we were with Leo, so the emotions and intensity that came with that, aren’t present right now. The surroundings are similar, but so far, it’s okay. And I’m hoping it’ll be an actual help when labour comes, as I’ll feel a bit more ‘at home’ here.

So for now, I’m living the hospital life, until further notice… 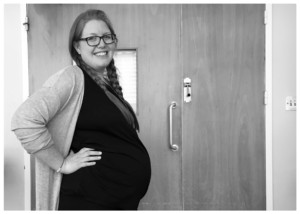