We’ve had another gentle week.  We are slowly ticking down the weeks until induction and sussing out what we need or want to do in preparation for Magpie’s birth, and hopefully, his homecoming. I’ve been meaning to talk about the indulgence of buying baby clothes for a while, as its one of those complex things in pregnancy after loss – so I thought now was as good a time as any!

Before I do talk all things clothes, following last week’s update, I thought I’d update on our growth scan. The scan was looking really good – Magpie is tracking exactly as he should, including in his blood flow and the ratio of blood flow into his brain. We really couldn’t ask much more of him, so its a welcome reassurance. He was moving and wriggling away in the scan, to the point that some measurements were becoming a little elusive, but we got there in the end. He’s moved a bit in the position that he was lying in, so it was also helpful to see that too. I suspected that he had, but couldn’t quite work out was position he was now in!

We also booked a time to explore our induction plans more and write a birth plan with a Consultant Midwife. Whilst usually you expect birth plans to be all about birthing pools and who gets to cut the cord (thats if you even bother with a birth plan at all!). Our birth plan will be focused on how to manage our anxiety, them allowing my wife to stay with me/us, and what to expect should things go wrong. By having the Consultant Midwife’s involvement, we are able to feel more confident that the plan will be acknowledged and actioned. Once we have finalised it, I’ll talk about it here.

A few weeks ago, we took the plunge and opened Leo’s chest of drawers. Whilst we have been comfortable using his room, his chest of drawers have rarely been opened. Mainly because, well, there’s been no need. Also because there is something about his clothes thats quite painful. They symbolise so much hope. The preparation that went into them – choosing them, washing them, organising them. Visualising a little boy wearing them. They’ve remained in his chest of drawers, where they were put just a few days before he died.

Before we ventured into preparing for Magpie, we needed to establish what clothes of Leo’s would become Magpie’s and what we wished to keep just as Leo’s. We selected a few pieces that we have vivid memories of buying or being gifted. Some we took into the hospital incase we wanted to put him in them after he was born. Those clothes will always be Leo’s and will go into his memory box. Others, that we liked for Leo, but perhaps aren’t as sentimental, have been given to my sister to make into something. The rest we are happy to give to Magpie. Had Leo lived, he’d have his brothers hand-me-downs anyway. 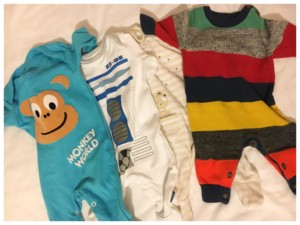 To Buy or Not to Buy

It can be quite tempting to avoid buying anything for Magpie. After all, we were pretty well prepped for Leo, and technically don’t ‘need’ anything. Sometimes it can feel like tempting fate, or falling in love with your new baby too much. There is a need to protect your heart. A massive need to protect your heart. When you are still grieving so much. Avoiding tasks like preparing and nesting can do just that. However, its something that on the most part, hasn’t been as painful as I’d expect.

I’ve said it before, but Leo’s ‘things’ aren’t what upset me now that he has gone – its the fact that he is gone that upsets me. They are a physical reminder of his presence in his home, and I love them for that reason. They are him. His personality. I think I would feel more guilt towards Magpie if we didn’t prepare or indgule in the hope of him – he is as loved and as wanted as Leo, and preparing for him is our way of expressing that. I don’t like the idea of Magpie dying (or living for that matter) and having nothing of his in the house. It would be like we didn’t really believe in him? 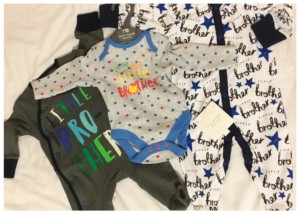 The Safety of Online Shopping

Most of our shopping however has been online. There is a welcomed safety in not having to walk into a baby clothes department – or even a dedicated shop. The first time we ventured even close, I had to leave quite quickly. Part of it, is looking at little boy clothes. I think it would potentially be easier with girls clothes as I wouldn’t be able to relate it back to Leo as much. Going into a shop, looking like blissful parents-to-be is nerve-wracking, not knowing what might be said or how you might react. Online shopping is the way forward. You can act purely on impulse, and from the safety of being able to feel whatever you feel about it.

When we have shopped, most of what we’ve picked, has meaning. There are also a lot of rainbow clothes out there, which is just lovely! Its quite a comfort to be able to have clothes that hold meaning (to us) but equally aren’t putting Magpie too much in his older brother’s shadow. We’ve enjoyed finding specific items that make us excited, as opposed to just buying standard packs of sleep suits… 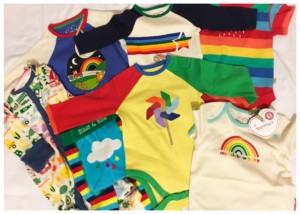 Lately however, I’ve found myself a lot more comfortable about seizing the moment if we are out and about somewhere. I’m feeling more and more comfortable looking in the baby departments, the closer we get. Delving in online has probably helped soften the intensity of the emotion – for over a year I’ve avoided looking at anything baby related, anywhere. And now, we’ve realised, we soon won’t have much of a choice, so we need to get used to it!

This weekend, we spotted that Baby GAP had a 50% sale on, so couldn’t resist. We also spotted this little gem folded in half, picked it up, and couldn’t resist. He has quite a few ‘Little Brother’ items now. There is also a lot of Lion stuff everywhere at the moment! And I really can’t resist that stuff! It’s nice to know that if we are struggling with missing Leo, we have something that can link to him, to dress Magpie in. 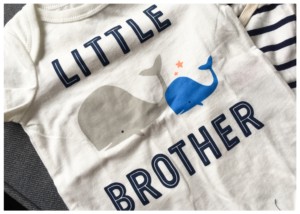 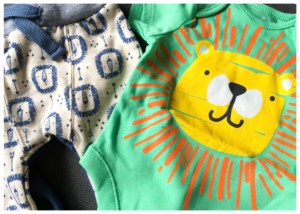 I really hope he will get to wear it all.

In case you missed it…

I mentioned last week, that we have started a Baby Pool for Magpie! We hope to also in the process raise a little bit of money for Tommy’s, who fund the Rainbow Clinic that we have attended. If you’d like to place your bets on Magpie’s weight or birth day… feel free to visit our baby pool website: http://www.babybookie.com/pools/24786-guess-the-magpie-raise-some-gold 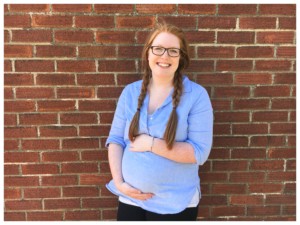