This week, we made it successfully to Week 30. To go from the 20’s to the 30’s seems significant enough to note. I think probably because in a pregnancy after loss, every day feels like a bonus. It also means that we are on a bit of the ‘home straight’. At times, it feels like we have won this battle – we’ve made it, just a few more weeks to go. For a flicker in time, it feels like that. And then you catch yourself, and wake up.

In Leo’s pregnancy, it was probably at this point that I allowed myself to relax, prepare and actually believe that this was happening. Yet, it was also at this point in his pregnancy, that he started to show signs of decline. These signs weren’t really noted at the time. But hindsight tells us that from this point, his growth slowed. We were given no indication that anything was wrong with Leo during his pregnancy. At our 36 week scan appointment, two days before he died, there was a small anomaly attributed to the sonographer pressing too hard. His blood flow was pushing normal limits. This was due to be reviewed a few days later, but Leo didn’t make it that far.

Knowing what we know now, however, its hard to not reflect and start to feel those murmurs of anxiety as a result. As Leo was conceived due to IVF, we had regular growth scans. This gives us quite a bit of information about how he was doing. Looking at his results, at 28 weeks his estimated fetal weight placed him in the 60th percentile, which fell to the 26th at 32 weeks, and back up to the 36th by week 36. His Abdominal Circumference went from the 93rd percentile at 28 weeks, to the 70th at 32 weeks, and the 77th at 36 weeks. His blood flow (dopplers of his umbilical artery) sat just under the top of normal range at 28 weeks, and exceeded it at 32 and 36 weeks. I don’t proclaim to understand the science behind these numbers. But it does stand out to me, now.

At the time, we weren’t given any cause for concern. There was no discussion about his growth, just his blood flow, and only at 36 weeks. By discussion, this was minor – an appointment for a rescan and the unlikely potential that there ‘may be a need for an induction’. We weren’t concerned, or sent home with any need to be. Thinking back to that last scan, haunts me. Should we have pushed for more information? We understand now that based on evidence and hospital protocol, that his slowed growth sat within normal parameters. Essentially, his percentile drop wasn’t big enough to raise alarm. If his actual weight was smaller, this would have potentially led to an induction at 37 weeks.

Based on his normal weight, it may have resulted in a 40 week induction. He died at 37 + 1 week. Whilst I do believe that the hospital followed their protocols correctly, I do not believe that those protocols suited Leo’s needs, nor do I agree that any slope in growth should be considered ‘normal’. How I understand it now, is that any change, is a change worth investigating promptly, and with seriousness. 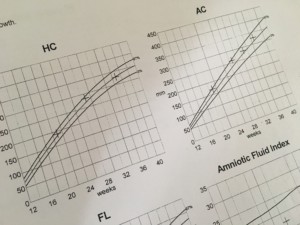 What does this all mean for us now?

What we know about Leo and how he declined, makes me feel very wary of presuming all is okay with Magpie. Whilst induction feels in reach now, that length of time is all it took for Leo to decline, and die. That sense that you don’t actually know how they are doing, is incredibly strong right now. Movements give you an indication, but not the whole picture. We have a scan next week, when we will be 31 weeks. I’m keen to find out how his growth is tracking, as its been consistent – just like Leo was – up until this point. Any slip for me, is a slip too big.

The awareness of reaching this point in pregnancy, and reflecting on in in relation to Leo’s, has been the echo in my mind all week. Its just sat there as this niggling thought, and I’m hoping next weeks scan will show us that its okay. We will also have another scan at the Tommy’s Rainbow Clinic in two weeks time – so both of these will hopefully ease my concerns for the time being. The Rainbow Clinic also operate on a different growth pattern chart, and that should allow us to be comforted that on both methods – he is hopefully tracking as he should be.

I’ve managed to keep my anxiety just at murmurs, but I have felt myself dip slightly. I am more critical of movements. Less convinced by my tracking evidence. Wanting kicks to be stronger, last for longer. Its not that they aren’t the same, I just need more. We will have another monitoring session this week, which will hopefully ease the bubbling anxiety. Lasts week monitoring session was okay, but started shakey. We started, and he was asleep. It took quite a while for his performance to get to a point that the midwife was happy with. It took a good 20 – 30 minutes extra, for it to be at a place that we were happy with. There were no concerns raised, and we made sure that we understood why. But for us, now, leaving the hospital has to be a decision we are happy with. Completely.

That said, we are still keen to mark and celebrate this milestone of 30 weeks. Its the delicate balancing act of pregnancy after loss. So we have started a Baby Pool for Magpie! I wouldn’t normally do such a thing, but so many people have followed our journey, and been such a support, we thought we’d have some fun with it. We hope to also in the process raise a little bit of money for Tommy’s, who fund the Rainbow Clinic that we have attended. They are such a support overall, whether its through the Clinic or their helpline. They have a genuine understanding of the balance of grief and anxiety during pregnancy after loss, and its such a comfort. The research that Tommy’s fund is really helping to change and save lives!

If you’d like to place your bets on Magpie’s weight or birth day… feel free to visit our baby pool website.

All the details about how to donate are also included if you’d like to, and we’d be so grateful for any donation: http://www.babybookie.com/pools/24786-guess-the-magpie-raise-some-gold

I’ll balance out my pessimism with looking ahead. I have just a few more days left at work, we have a fundraising event at the weekend, a scan, a support group session, a wedding, and a visit to Manchester all in the next fortnight. These small markers on the calendar really help to let the weeks move forward. Keep an eye on my blog’s Instagram or Facebook to see what we are up to in-between my updates. 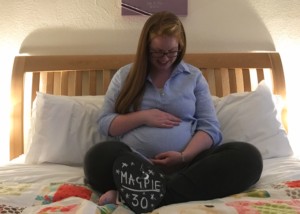