Lately, we’ve felt as if there has been a shift. From day one, it hasn’t felt as though we’ve been walking a steady slope to the end point of this pregnancy. From day one, it has felt like we’ve been walking up a sheer cliff face. With less walking, but more scrambling, clutching on, climbing. Yet now, it’s starting to almost feel as though we can see the top of the mountain.

Up until now, we’ve only really dared to think ahead to the point of a live, screaming, pink baby, coming home with us. We’ve dabbled in the make believe of it all. And we’ve drunk up the joy when we have felt it. But fully embracing the concept of looking beyond birth has been incredibly unknown.

Hitting the third trimester has helped things shift somewhat. This trimester will be our shortest. We don’t have the unknown of when labour will be, as we did in Leo’s third trimester. We have a scheduled induction, and we sit in single figure weeks to that date. That feels so unbelievably surreal. But it has allowed us to count down, and not up for the first time.

Generally in pregnancy, people count down throughout. Only three months to go! This isn’t a luxury we’ve been able to give ourselves. We don’t have the ability to feel secure in reaching any point in pregnancy. As a result, every week is celebrated. Every week is an achievement. Every week gives us a greater chance of a baby surviving, should it be born.

Having a planned end point allows us to know what we are counting down to. It still feels like we have a steep climb ahead of us, but it feels a little less sheer, and that a hazy summit is in the distance. It’s allowed us to think beyond birth, and mentally start to prepare for how we might feel once a baby is here, alive.

An Unknown in the Knowns

One aspect of Pregnancy after Loss that I’m beginning to realise more and more, is that we’ve done this before – but only half of it. We aren’t first time parents in the sense that we were 18 months ago, in our third trimester with Leo. We’ve done labour, we’ve reached full term before. The unknowns of before, are now known. I understand what contractions feel like, the physical after effects of labour, what my milk drying up feels like. I’ve experienced the hormonal crash – yet I didn’t recognise it as that, as grief just clouded it all.

We aren’t first time parents, but we are at the same time. We are stepping into a world of unknowns, but a world we struggle to allow ourselves to fully believe could ever happen. The shift in starting to accept that in nine or so weeks, we might just be on the other side – the parenting after loss side – feels beyond surreal. I’m not sure that there is a word adequate enough to describe it.

As the weeks tick by, I’ve realised how quickly these next few weeks are likely to go. We’ve slowly dabbled in some preparation, materially and mentally. We have a fair bit more to do!

On Friday, we start weekly monitoring, which will no doubt make the weeks seem like they fly by. In just a few weeks time, I will go onto Maternity Leave. We have a few social events, such as a wedding, a fundraising event and a few other smaller activities planned. All of these things will no doubt allow us to structure the weeks into manageable chunks. And let them go pretty quickly!

It’s a scary but exciting prospect – daring to dream. The more reassurance I gain from Magpie and from our appointments, the more it feels that we are able to. That excitement rarely exists without triggering some level of anxiety, and it is managing that and monitoring it really. We’ve had another mostly gentle week, and that in itself, is so very welcome. 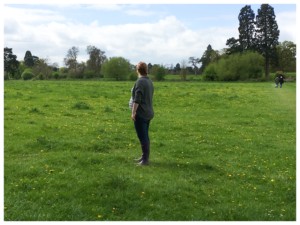