This week has been so much calmer than recent ones – and it’s been so welcome. Over the weekend, we started sorting out the nursery for the second time. I’m so excited by it. It comes with a range of emotions, but on the most part I see it as a positive.

A Little bit of Redemption

The week Leo died, we were finishing off the nursery. The last day I spent with him alive, I was pottering about in his room, sorting out his bookcase. When we started planning his nursery, I had a fair few ambitions, but we never really got round to it. We wanted to paint, but I couldn’t decide on a colour. So we settled on the fact that it would be a few months until he was in the room anyway, so we could always come back to it.

But, he never came home. I’d thought during my pregnancy, that should things go wrong, returning home to a nursery would be awful. However, it never has been. It’s been a comfort, it’s part of him. His belongings are in there, and over the year, he’s more than added to them. The door has never been shut, as people suggested. But we’ve always had a sense that it’s never been finished. Not how we planned anyway.

Sorting the nursery out for Magpie has given us an opportunity to do just that. Finish the room. We aren’t just creating and finishing Leo’s room. That doesn’t really feel right. It’s becoming a very different room to what we’d originally planned. But there is still a sense of redemption that we are creating a warm, cherished, love filled environment that we have planned. 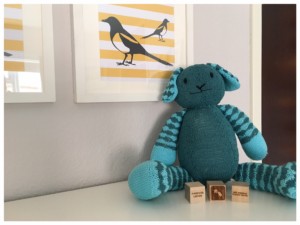 A Room for Siblings

The room has been Leo’s for so long, and when he died, and people asked us if we were going to get rid of his belongings, we always said “no, they’ll become his brothers or sisters, just as if he’d lived”.  We aren’t afraid of making sure Magpie knows his brother, and feels his presence. So the room, will be both of theirs.

We have created a little corner for some of Leo’s most cherished possessions. Leo won’t be confined to that corner, but equally it’s nice to have a space that is his. 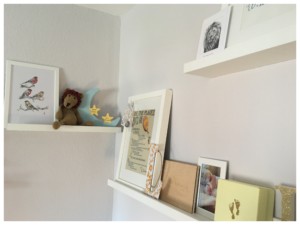 It is this delicate balancing act that allows our hearts to prepare for Magpie in this way. We can actively do things for Magpie, by offsetting it with doing something for Leo too. It feels safer that way for our grief.

When we were planning Leo’s room, I wanted greys, blues and chevrons. I don’t think we ever actually got any chevrons! But we had some blues, and a few greys. So on this basis, for Magpie we have gone with greys, blues, and the new addition of mustard – inspired by our first Magpie themed nursery purchase! 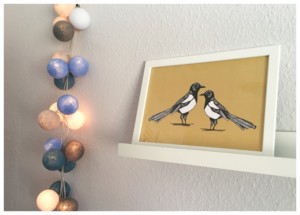 We have also finally painted! It was a must this time round. We live in rented military accommodation, which comes complete with wood chip magnolia walls and random colour carpet. We’ve never decorated, due to having to put it back when we leave. But we wanted to make an effort with the nursery (and are now resisting the urge to paint the whole house!). It’s made such a difference – which was pretty predictable.

I also made some animal prints, to symbolise Leo Phoenix, the baby we miscarried and themed Robin, and Magpie. I like having subtle additions like this, that have meaning. 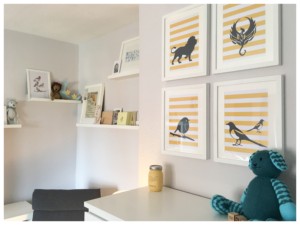 We still have a lot to do, and have a lot of displaced belongings (mostly ours…) so will have a fair bit of pottering to do over the next few weeks. It may feel early to some to do it, but it felt like a safe time – and a worthy celebration of hitting third trimester.

With all of these things, I now know that my heartbreak won’t be materialistic. And should we be left with just a nursery again, the room will be filled with the love and warmth of both our sons. Which is such a comfort. I know it sounds morbid to think like that, but that’s the reality of pregnancy after loss, and it’s important to openly embrace that truth. To acknowledge the fear and the possibility, and to balance your approach to things with that out in the open, helps your heart.

In other news this week, we have successfully avoided the Maternity Assessment Unit! We had a scan and consultant appointment on Monday, where we discussed my anxiety. So going forward from next week, we will start weekly monitoring. Whilst I never thought we’d get there this early, I’m grateful to have it. We’ve planned it for Friday’s so I’m hoping it’ll help me get through the weekends which seem to be my tougher days.

I’ve also had the joy of normal pregnancy problems. This seems like light relief compared to the crippling anxiety! Niggling heart burn, a bad back and squashed lungs are a welcome distraction.

We’ve also entered the third trimester with a ten-ish week countdown to a scheduled induction, and that’s exciting but hugely surreal all at the same time! We aren’t over focusing on it, for fear of freaking out, but it does feel quite freeing to have a focus point and to not have to have uncertainties around our general plan for labour. 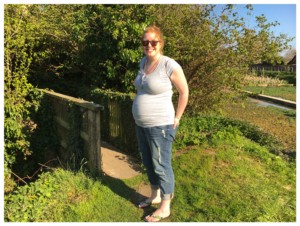