I started feeling movements at the weekend. Before this, I’d felt ‘things’ but had never been convinced it was movements. I’d started feeling that bubbly feeling quite a while ago, but I have felt it in-between Leo’s pregnancy and this one, so it’s hard to say for certain “its movements”. Now, we have graduated to actual kicks – small, without much power, but absolutely kicks.

As expected, it did send my head into a bit of a spin! Once a few days of feeling them here or there had passed, and I was confident that they were movements, I started to feel a bit low in confidence about what to expect and what to keep an eye on. I feel very confident in how to monitor movements from 24 weeks, but I suddenly realised that I wasn’t sure what I should act on, or not, at this stage. My anxiety is either not really there, or extreme and I started to feel that set in. I phoned my midwife to talk it through and felt very reassured in them not expecting movements every day at this stage, and for the next few weeks to just savour what I do feel.

I’ll admit, I was scared about calling the midwife – more because I didn’t want them to tell me to go into the Maternity Assessment Unit to get checked out. I know it will happen at some point in this pregnancy, but it’s still such a scary prospect to walk into that department, after going there when Leo died. Despite that fear, I know I have to call, and I know I have to go in, if and when I need to. And calling straight away as I got anxious, did help. So that’s a good lesson to learn, right?

Reaching this milestone is huge for us. We knew from the beginning of this pregnancy, that if we made it to 17 weeks, we’d have an appointment at the Rainbow Clinic. The Rainbow Clinic has run for the past few years from Tommy’s Research Centre at the St Marys Hospital in Manchester, England. Funded by the Tommys charity who work tirelessly to research miscarriage, stillbirth, neonatal death and prematurity, the clinic provide specific support for those going through a pregnancy after loss.

We contacted the specialist clinic whilst waiting for Leo’s post mortem results, and arranged a referral so that they could review his notes. Part of that review was to discuss care in a subsequent pregnancy, and our focus was the placenta. Leo died as a result of placenta insufficiency, with his placenta being significantly too small compared to his weight. Whilst his weight at birth, and his last few growth scans were considered normal, his growth had slowed. His growth had slowed but the rate of his growth slowling was not significant enough to cause concerns. Ultimately, he failed to maintain his growth potential as a result of placental insufficency, and it was never highlighted as a concern as despite this failure, he maintained a weight and growth within normal limits.

The Tommys Research Centre are also specialists in the placenta, so it was important to us to tap into this expertise, despite them being out of area, and a 3-4 hour drive away. We’ve had to explain this decision to a few people lately, but wouldn’t anyone go anywhere that could help prevent burying another child?

We didn’t really know what to expect from the appointment, but we were SO impressed. Small differences from our local clinic appointments we had with Leo, were so significant in making us feel so well cared for. For example, the specialist, bereavement trained Midwife, Louise, was present through the entire appointment. I really liked the approach of having both the doctor and midwife working collaboratively as a team, both utilising their skill sets to help us. We are able to contact Louise whenever we need to, and knowing her level of involvement and understanding in our history and pregnancy is so helpful. No doubt it’ll make us more likely to easily contact them.

As with our local clinic now, the doctor seeing us, also conducted the scan. I really value now the importance of having less people involved in the appointments. In Leo’s pregnancy, a clinic appointment involved four to five different people, with a short consultant meeting at the end just reviewing the stats everyone else had collected. Whilst I’m sure this is still sufficient for them to make decisions, knowing that the doctor and midwife who is helping us make crucial decisions are 100% involved in all aspects of the care is incredibly significant to me, and really helps you trust in their knowledge of you and your baby.

Before the scan, the midwife also asked me if I wanted my screen to watch left on, or turned off. Small things like this show that they recognise the level of anxiety that scans can create. Up until feeling movements, I’ve usually stared at the ceiling until they confirm a heartbeat, and it’s usually met with a “feeling a bit anxious, are we?” comment from someone who may or may not know the full extent of our history. Having that anxiety validated with such small things like that is so calming, and put us right at ease.

One aspect of the clinic’s expertise, was their ability to scan and assess the placenta. This isn’t part of our standard high risk care locally. They measured the placenta and assessed the blood flow in and out of the placenta, and the cord insertion. The blood flow and size were significant aspects from Leo’s review, and we are pleased to say all is looking as it should do.

It led me to ponder, if Leo was able to access this level of care, would we have known he was having issues, and would his growth slowing have been viewed more significantly? If our local hospital was able to measure and assess the placenta as standard, could they have saved his life? I think, deep down, I know that that is probably the case. I wish this level of care was available to everyone, as standard. We need more funding, more research, more evidence to justify more training and skills as standard, to save more babies. There doesn’t need to be these limitations, but there are, so it only left us even more determined to fundraise for Tommys.

We can have the Rainbow Clinic as involved in our care as much or as little as we would like, and they will work in conjunction with our local team. We will visit again at 23 weeks to have another placenta and growth check. They also monitor growth differently to our local clinic, so I’m curious to see what the two different systems tell us.

One aspect I was really pleased with from the clinic, was their zero tolerance on this baby’s growth trajectory slowing. They want the growth to sTay on the percentile that it is on currently and even if it slows, but within normal limits, like Leo, they would see this as a warning sign and assess further. This gives me so much confidence that another baby won’t be victim to appearing normal and okay, but actually struggling without us knowing.

I am so, so grateful for the Rainbow Clinic, Tommys and the whole team. All year, they have given us so much hope and faith that we can do this, and that there are people out there fighting for people like us. Without that, I’m not sure we could have taken this step.

For once in the past few months, the glimmer of hope is overpowering the darkness and I hope it will remain for longer than a few days. 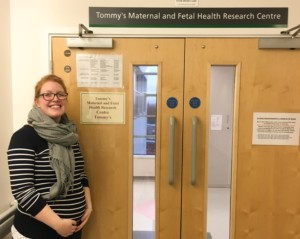