Anxiety is setting in worse than I feared. So far there have been no signs of the same complications I had with Jack. You would think that this would bring me comfort, and that my mind would be at ease imagining that I might just make it to full term. But it doesn’t.

Now, more than ever, I feel like a ticking time bomb. I am officially past the point where I lost Jack, and it only makes me search that much harder for any sign that I’m going to lose Bo as well. Pessimism has become my new fried as I imagine every movement being her last.

I made my fourth trip to the hospital this week. I became suddenly nauseous and after an hour of throwing up, I looked up what might make someone suddenly sick at 32 weeks pregnant. Of course, pre-eclampsia popped up, which was the only push I needed to go immediately to the hospital. 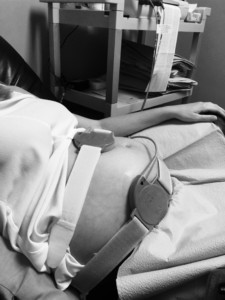 What we saw is the same as we’ve seen this whole pregnancy—Bo is perfect. I was having contractions (like usual) so I received my third shot, in this pregnancy, to stop them. I also received a shot to stop the nausea which meant, for the first night in about a month, that I slept soundly without waking up one time. We never determined what made me sick, perhaps it was just a bad reaction to my dinner. But what we did know was that it wasn’t related to anything harmful to Bo.

Everyone keeps reassuring me that I am completely justified in getting every odd situation checked out, but I’m beginning to feel ridiculous. Part of me would love to just live at the hospital for the next seven weeks, just so I don’t have to keep making judgement calls on whether or not to go in. I could rest at ease knowing that at some point this baby is coming home. For now, I still worry that something will change overnight or that I’ll miss the signs again.

And I’m still left wondering where the signs are. If those symptoms could be so strong in my first pregnancy to cause the loss of my child, is it possible that they won’t show back up, even just a little, with Bo?

About the Author: Janice Leister

Janice Leister is the Instagram Manager for Pregnancy After Loss Support, as well as a contributor to the Bump Day Blog. She lives in South Carolina with her husband and Golden Retriever, Dug. Janice experienced the loss of her first child, a little boy named Jack, in 2015. After 32 weeks of a perfectly healthy pregnancy, her blood pressure spiked, which caused a placental abruption. Unfortunately because it happened so quickly and without any noticeable symptoms, her son passed away; she delivered a beautiful child, stillborn, on March 18th. Struggling to deal with the loss, she reached out to local support groups and women with similar experiences via social media. Eleven months after their loss, she and her husband were ecstatic to learn that they were pregnant again. She is currently pregnant with their rainbow, “Bo,” and is due in October 2016. Her subsequent pregnancy led her to PALS, where she has actively been trying to help other women by sharing her own experiences of pregnancy following a loss. You can contact her on her personal Instagram account, or at her blog, The Reluctant Aviator.