This week was interesting. One planned trip to Labor and Delivery, and one unplanned. While I want to focus on my planned trip, first I’ll give a quick update on why I went into L&D on Monday night.

On Sunday night I noticed that Bo was not moving well. I had been busy all day, but I realized I couldn’t remember the last time I felt her. When I was resting on the couch, I started to get nervous because she wasn’t doing anything. I also noticed that my dog, Dug, was following me everywhere and sleeping on my stomach. His attention reminded me of how he was when he sensed that Jack had died.

I told myself that I was fine, and I felt her finally give a few kicks when I laid down to go to bed. When I woke up on Monday morning I still felt off. She wasn’t doing her usual morning wakeup kicks, so I started to poke around my stomach. I finally got a few response kicks back, but it worried me that she wasn’t doing it on her own. I told myself that I’d see how the day went and then I’d go. After work I drank some orange juice and laid down—for an hour I felt nothing, but I was having contractions. I decided that was my cue to go in.

It turns out that I was starting preterm labor. When you have contractions, it can kind of corner the baby, making them less active. Bo was fine and healthy, but wasn’t able to move while the contractions were happening. They discovered that I am already dilated and that my body was having fairly frequent, small contractions. They gave me a shot to stop the contractions, and for now everything is fine. 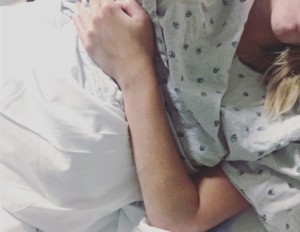 I learned that each pregnancy really is different, with its own chance of separate issues

The next night I went back to L&D, but this time for a hospital tour. This is really for all second-time moms, not just those of us who lost our first child. I felt like Bo needs her own pregnancy experience, and that includes her own hospital tour. This was a total first for me, however, because I hadn’t toured the hospital before Jacked passed.

I decided to go to this a few weeks ago after my first scare. I had cried being back in the same place that I had lost Jack, and my reaction made me realize that those feelings would be very present at Bo’s delivery unless I actively tried to change it. Going back to the hospital for positive experiences, I felt, would help me for when it was time to deliver Bo.

The hospital tour still had sad moments. It was hard to see everything I missed because Jack was born still. I didn’t have the little rocker in my room, or the lactation consultation. I was sad to think about how different my experience was from the one they were describing. But still, there were things to be excited about. We left feeling happy that Bo is healthy and we can’t wait to be back on that floor, as parents to a newly-born baby.

I recommend that everyone take a tour. The hospital is so terrifying, especially if you haven’t been back since your loss. I needed to make this all about Bo. I think that with a second child, we let our first pregnancy dictate so much about what we do, and we forget that our next child needs those special memories as well. I am trying very hard to not let my loss drown out all the positives that come with each individual pregnancy.

About the Author: Janice Leister

Janice Leister is the Instagram Manager for Pregnancy After Loss Support, as well as a contributor to the Bump Day Blog. She lives in South Carolina with her husband and Golden Retriever, Dug. Janice experienced the loss of her first child, a little boy named Jack, in 2015. After 32 weeks of a perfectly healthy pregnancy, her blood pressure spiked, which caused a placental abruption. Unfortunately because it happened so quickly and without any noticeable symptoms, her son passed away; she delivered a beautiful child, stillborn, on March 18th. Struggling to deal with the loss, she reached out to local support groups and women with similar experiences via social media. Eleven months after their loss, she and her husband were ecstatic to learn that they were pregnant again. She is currently pregnant with their rainbow, “Bo,” and is due in October 2016. Her subsequent pregnancy led her to PALS, where she has actively been trying to help other women by sharing her own experiences of pregnancy following a loss. You can contact her on her personal Instagram account, or at her blog, The Reluctant Aviator.