I Called Her by her Sister’s Name

My little girl is 10 weeks old now! Time went slowly for the first few weeks but is now racing past, despite my pleas for it slow down. This is my second time parenting after loss (my son Levi is almost two years old) and it’s definitely different this time.  I have relaxed quicker with Seanna – not feeling like I need to check on her all. the. time. like I did for Levi – and am more confident in my ability to parent a living child. So mostly I’m finding parenting after loss easier. Except for one thing: names.

In the days after Seanna was born, I kept going to call her Ariella. Ariella is our other daughter, the one who is in our hearts not our arms. Sometimes I would be able to stop myself before actually saying it but at other times, I called Seanna by her sister’s name. The first time I called her Ariella, I cried. I couldn’t work out who I was being unfair towards. Was I being unfair to Seanna? Did calling her Ariella mean I wished that she was Ariella? Or was it unfair to Ariella, was I replacing her with her baby sister? Mostly I think I felt guilty. Guilty that I couldn’t use the right name, guilty that Seanna might live in her sister’s shadow, and above all guilty for not being able to save Ariella. Looking back now I can see that none of those thoughts are true. I know that parents mix up children’s names even when all their children are living. But at the time, logic didn’t win and all I could do was cry. 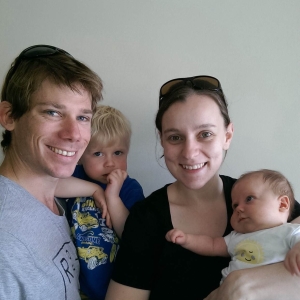 After a couple of weeks, I mentioned my struggles to my midwife. She had cared for me during my pregnancies with both Ariella and Levi so she knew my situation and how best to talk me through my mixed emotions. She told me that for three years, the girl’s name in our lives was “Ariella”. Even before she was born and we found out she was a girl, that was the name. For us, a daughter = the name Ariella. It was only natural that it would take some time to get used to calling a daughter by a different name. It was quite freeing to think I wasn’t subconsciously using Ariella’s name because of some hidden emotion, it was simply the name we had used for a daughter for years. I felt so much better after that conversation and even began to find it funny when I mixed up my girls’ names. I’m pretty certain I would have done it if Ariella was alive so in a way, using her name on her sister makes me feel like she’s still a tangible part of our family (which, of course, she is). I’ve even had some friends call Seanna by her sister’s name and it brings a smile to my face. It shows that they haven’t forgotten my first little girl!

These days, I’m so exhausted from parenting both a toddler and a newborn that both of my living children get called whatever name comes to mind first. Sometimes I even have to stop myself from calling my husband by one of the many nicknames I use for my son! I’m hoping that one day my proper thinking skills will return, but in the mean time my only hope is that my children get used to responding to their siblings’ names!

About the Author: Larissa Genat

Larissa Genat lives in Adelaide, Australia with her husband Marcus. Her firstborn, a beautiful girl named Ariella Jade, was stillborn at term in January 2013. After an anxious nine months, her son Levi was born safely just weeks before Ariella’s first birthday. Her third child, Seanna, was born safely in August 2015. You can read more of Larissa’s story at www.loveisdeeperstill.blogspot.com