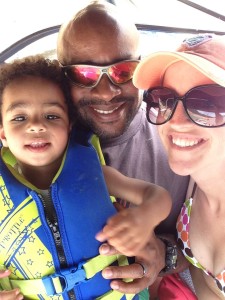 Samuel, LaRon (hubby) and Me

Hi I’m Jamie. This is me and my husband with our oldest son, Samuel.

I am here to write about subsequent losses and wading my way through those waters. I hope our story can ignite more hope into you. Even on the days that feel the most hopeless.
I signed on to be a Bump Day Blogger recently and was so excited to chronicle my journey with you all, from the very beginning. Sadly that tenure ended almost as soon as it began with a blighted ovum diagnosis and a subsequent D&C. This isn’t our first go around with loss, actually it’s our 3rd. All varying circumstances. All have irrevocably changed us.

Our first pregnancy went exactly as you could expect and ended in the birth of our beautiful son Samuel at 39 weeks, he is now 3 1/2 and the energy and light of our lives. We had naive innocence that everything was perfect. After all, our first pregnancy went so well and ended in a healthy child being in our arms that the though that anything could go wrong never crossed our minds. We decided to try again when Samuel turned one, shortly after his November birthday we found out we were expecting again! Excitedly we announced it to all of our friends. All our appointments had been going great, until our appointment at 12 weeks, no heartbeat. The baby had stopped growing around 9-10 weeks. A “missed miscarriage” followed by a D&C. We were devastated. And brought into awareness of “things can go wrong.” A time of healing passed and we decided to try again. We got pregnant in September 2013 with a June 2014 due date! We announced our pregnancy that time on New Years, we were after all, out of the “danger zone”. A few weeks after announcing we found out we were having another boy! I was so excited for Samuel to grow up with a brother! Our excitement turned to worry and fear as I developed Class I HELLP Syndrome on March 7, 2014. That day, at 25 weeks, 5 days, our precious 2nd boy, Malachi James had to be delivered. I chronicled his story over at Wife.Mommy.Work. This blog isn’t about his story, however in short, he was born IUGR at 1lb 1.8oz, he had a blocked bowel, which led to surgeries, procedures and more complications. On July 12, 2014, 127 days after his surprise early birth, he entered heaven. 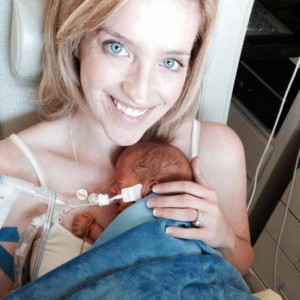 I never thought I would recover from our loss of him. He lived, he breathed, I held him, I fed him, and now he was gone. The pieces of my broken heart laid scattered. I clung to my faith during this time. The only thing I clung to was that if I was not anchored in the goodness of God,  there was no way I would be able to make sense of what was happening. No matter what happened here on earth, God was good. Some day this statement was the only thing I could utter. I have given up trying to find the answers why. I know God doesn’t mind the questions, but I have learned that the answers are not for my human heart to know, because there is no way I would be able to comprehend them. Soon after Malachi’s departure from earth My sweet husband indicated he was ready to “try again.” His heart longs to be a father, it is the joy of his heart spending time with his boys. He is incredible with them. I didn’t know if I’d ever have the courage again to try for another baby. But slowly…the longing in my heart for more children (we had always wanted 4) began to thaw the cold, hardened pieces of my heart that said “no.” One day I decided it’d be ok to talk about, another day I decided to make the appointment to take the IUD out, after that I knew we were “all in” and doing this again. Fear and Hope wrestled for their places in my heart and mind. Hope said “let’s try again”.  Not much time longer, on May 20th, we discovered we were pregnant again. We immediately began to take the precautions our high risk specialist told us to do. We met with him at 5 weeks, I began daily lovenox injections that I referred to as my “love shots”.. I had been feeling great, no sickness, a little lethargy, but overall wonderful. I was excited for this experience and felt blessed to be able to go through this again. Nothing in me foreboded of things going wrong. At our 8 week ultrasound with my normal OB, we discovered things were wrong. I was diagnosed with a blighted ovum. A D&C was performed a few days later.

I have struggled a lot since this most recent loss. Doubt clouds my mind that my body is capable of taking care of my babies. 3 losses in a row. All of different circumstance, none related to the other, because maybe that tie would give me some answers, some sort of reason. Questions of why this, especially after all we’ve been through cloud my mind. It’s been a difficult few weeks wading through the grief of this loss, and commemorating the first anniversary of the day Malachi left. I feel glimmers of hope though. Knowing that we made it through what we did with Malachi, gives me hope that we will make it through this as well. I”m not sure where I am at on attempting pregnancy again. I don’t know if I trust my body. Some days I see hope that we will, others are more clouded with fear.

Thank you for reading my story! I am looking forward to sharing our journey and experiences with you.