Hope and Hesitation:  The Prove It Pregnancy After Loss 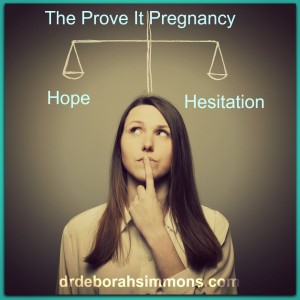 “What are you so worried about?  You’re “just” pregnant. Aren’t you excited?”  Conception, pregnancy, and delivery are just a part of life.  Right? For some people, that is true.  Doctors, family members, and even strangers talk so breezily about pregnancy.  But when you have had one or more miscarriages, a stillborn baby, or premature delivery, a new diagnosis of pregnancy is terrifying.  The title of this blog post, Hope and Hesitation: The Prove It Pregnancy After Loss, comes from conversations with many women and men who have had anything but normalcy in their reproductive stories.

I started talking about prove it pregnancy after my own reproductive disappointments and disasters. When you live in prove it land, you worry about IF you will have a baby or IF that baby will live.  That’s the real deal, not other people’s dreams of pink and blue nurseries.

Most women want to be pregnant again as soon as possible after a loss.  We are all looking for hope.  But along with hope, a prove it pregnancy comes with hesitation, doubt, and fear.  Pregnant again after a number of miscarriages, an intended father said to me,

“I’m excited but I’m holding back” to protect myself.  This isn’t “just” pregnancy.  It’s pregnancy and everything else that has happened until now.”  His pregnant wife said, “Every time that we think everything’s okay, that is when it’s taken away.  I’m pregnant.  For now.”

One of my clients became pregnant again after her twins died.  She told me that she was looking forward to having another baby…

…MAYBE and breathing again, not waiting for something bad to happen. People want you to look at the positive and a good outcome and I can’t even look.  My mind is afraid to even consider any good stuff.

After several miscarriages, another of my beautiful pregnant clients said,

I’m doubting and second guessing everything. “Don’t worry” equals you are an idiot.

Even if you have a living child, you may feel like a mother for the first time again after a pregnancy loss.

The fact that I’ve had a full-time pregnancy and I have a child doesn’t seem to mean much right now.  I want to have hope but fear gets in the way. I’m just scared.  I have such a long way to go.

Of course you are scared.  When you’ve been hit by lightning, you fear being struck a second time.  But here’s the thing…

How do you get your mind around that?

You focus on possibility, not probability.

How will you have another child unless you pack your parachute very carefully, say your prayers, and jump with your eyes wide open?

Think hard about which OB or midwife practice you will work with.  If it’s too painful to go back to the practice where you experienced loss, even though that practice and the providers are great, you can find a new practice.  You can insist on working with the high-risk OBs, called perinatologists or maternal-fetal specialists.  And most important…

If any doctor tells you not to worry, you’re just pregnant, RUN.

With the right OB or midwife practice, you can negotiate how often you will be seen.  You will need a lot of reassurance, and then some more.  Of course you will!  That is normal! I understand that relief is fleeting and you will worry about the next thing.  I was only able to make it a week between prenatal visits without losing my mind.

Work on positive neutrality and use caution.  It’s the best prove it position.

In every pregnancy, every woman needs to be aware.  Not hyper-aware but attentive.   It’s just reality and it’s just a good idea.

You won’t believe me right now but a moment may come when you spontaneously entertain the idea that you might actually bring home a baby.  When you can peek on Pinterest at baby clothes and nurseries.  When you can allow yourself to feel excitement, for just a moment.  Yes, you.  It could happen.  Something could go right for a change. 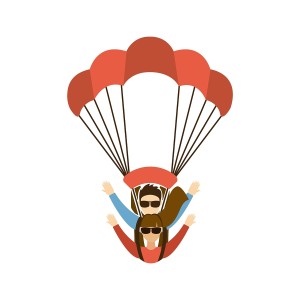 About the Author: Dr. Deborah Simmons

Deborah Simmons, PhD, LMFT, is a marriage and family therapist and co-owner of partners (in)fertility of Minneapolis, a holistic mental health center. She has been working in the area of infertility, pregnancy loss, and reproductive complications since 1997. She has been a member of the American Society for Reproductive Medicine since 1998. She is on the Medical Advisory Team of the Star Legacy Foundation for Stillbirth Awareness. Dr. Simmons has worked in a fertility center and in private practice. She is particularly interested in the topic of reproductive decision-making. She is trained in EMDR and hypnosis, both of which have been very helpful to patients undergoing or healing from medical procedures and pregnancy loss. She is active on social media on her blog, Facebook, and Twitter.