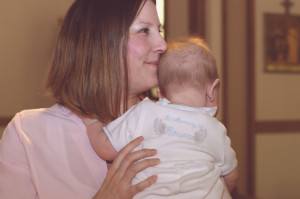 A painful truth for me after Rowan died was that he would not be baptized; blessed, yes, but not baptized. It was among the numerous heartaches for me.

When Homer was born–living and breathing–I wanted him baptized immediately. However, my reasoning skills took over, and I realized it was best to wait until we could visit home where Homer could be baptized at our home church. It is where my grandparents and parents were married, where I made my first Communion…it is where Rowan’s private funeral was held. Because we would be visiting home between traveling to Christopher’s new duty station, we decided on sometime during that visit. It was the end of Lent, and I knew our possibilities were limited. Luckily, the staff and priest of our church are amazing! Homer’s baptism was set for the Sunday after Easter known as Divine Mercy Sunday, the very day we needed to get on the road to head back to Virginia.

I had already found the most darling outfit for his special day. He would be wearing a small gold cross that was his nana’s when she was little (Rowan was buried wearing the cross from my baptism). I wanted to find a way to honor Homer’s big brother in a loving way, and decided to have a tribute embellished on the back of his jumper. Originally, I thought of doing Rowan’s name or monogram, as Homer’s monogram would be on the front. When I took the item to my childhood friend’s mom (who owns a very successful embroidery business in our hometown), she and her assistant came up with the most beautiful idea: Rowan’s name between angel’s wings on the back of the jumper. It turned out even better than I could have imagined.

We now have gorgeous photos of Homer’s special day, as well as his baptismal outfit honoring both of our angels–Homer in our arms, and Rowan watching over us from above. For me, the day commemorated by this keepsake was almost a baptism for both of my boys, and it brings me a bit of peace that was missing before.

I am grateful for that.

What are some of the “little things” that have given you peace?