Well, it’s hard to believe that our little one is almost two weeks old already.  I’ve always believed that something strange happens to the time-space continuum when you have a baby. The days and weeks leading up to the birth drag on so slowly, but everything travels at warp speed once they arrive.

On Friday, January 2, our dear family friend and her sweet daughter showed up at our house at 5:30 a.m. (!) to watch our four children while we went in to the hospital for my c-section. I hadn’t had much sleep the night before, partly due to the fact that my six-year-old was having a lot of anxiety about me leaving, and partly because I was having some anxiety myself.  Even though this was my sixth delivery, I have some kind of psychological terror about the spinal/epidural procedure.  This time around, it started as soon as I saw the line on the pregnancy test.

So I spent the ride to the hospital talking myself down from the fear and feeling incredulous that we were actually going to meet our baby in a few hours.  We checked in and got settled, and I got my IV after four or five tries (apparently not being able to eat or drink for twelve hours beforehand makes it tough to find a vein). And then, thankfully, I met one of the kindest, most understanding anesthesiologists ever. He was completely sympathetic to my fears and gave me something in my IV so that my blood pressure wouldn’t drop and leave me lightheaded while he gave me my epidural, and then it was done, rather painlessly.  He was truly an answer to 37 weeks worth of spoken and unspoken prayers. 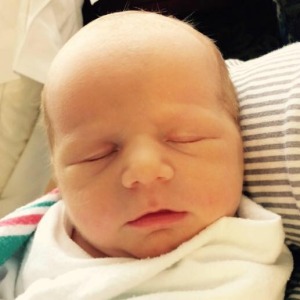 He came out crying, but then he took a breath and aspirated some amniotic fluid into his lungs.  I could hear him coughing and saw the nurses rubbing his back and suctioning him to try to get it out, but after a while it was clear that he was going to need to get some extra help, so he had to go the NICU.

This brought back a flood of memories, as my Brigid was born without crying and whisked away to the NICU right after her birth. She died there 47 days later.  And even though I knew the situations were so very different – Brigid was 28 weeks to Brendan’s 37, she was tiny and so fragile and he was bigger and stronger – I still started crying on the table as they stitched me back up.  My husband went with the baby and my doctors were so understanding and reassuring that Brendan would be okay, that this kind of thing happened often and they knew what they were doing. And then my kind anesthesiologist was wiping my tears and telling me that it was going to be fine.

Brendan did well in the NICU and mainly just needed some air pressure from a nasal cannula to keep his lungs open so that they could drain.  Going there to visit him brought back memories, too, and it wasn’t until 10:00 p.m. the next night that he was able to be released from the NICU and brought down to my room with me. Any bonding that still needed to happen was so instantaneous. The numbness was gone, the walls I’d built around my heart during pregnancy came crashing down, and every part of me just wanted to cuddle him and tell him how much I love him.

Now that we are home, I find myself overwhelmed with this thought: when we found out we were having our twins, we had our three boys, and I can remember my husband and I just kept looking at each other and saying, “FIVE! We’re going to have five kids!” And then one of our girls died in utero, and it was four. And then our second twin died in the NICU, and we were back to having three. And I kept thinking to myself, “Why? If we were just going to be the same five people again, why did we have to go through all that?” But I know that I am a person who has changed because I went through the loss of my children, and though I wouldn’t wish that experience on anyone, I believe I am changed for the better.  I am stronger. I am braver. I have a different perspective on life. I appreciate the present more.

And now, three and a half years later, I sit here looking at my two children born since that experience. 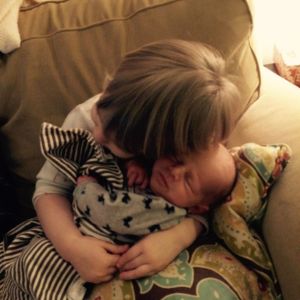 Along with the rest of us, my rainbow, Maeve, now two, is completely in love with our little Brendan. It is so heartwarming to see them together, and then I wonder if they would even be in our lives if our twins had lived.  (And then my sleep deprived brain begs me to stop thinking things like that before it starts oozing out my ears like oatmeal.) We are a family with five children again. Only I am now a different person than I would have been the first time we might have had five. And I can only hope that one day I might be able to understand it all.

About the Author: Eileen Tully

Eileen Tully is a wife, a mother, an artist, and a writer. She lives with her husband and four of her young children in southern New Hampshire. She will be writing weekly about her current pregnancy again after the loss of her twins and the feelings that accompany each stage. Eileen creates memorial artwork and writes about life after loss on her blog, Little Winged Ones.