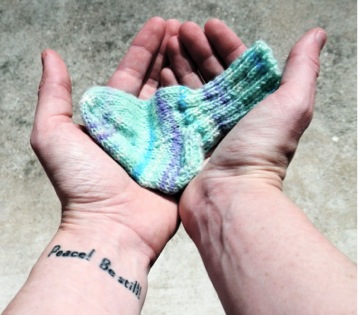 I see pregnant women everywhere. On Facebook, my news feed is flooded with happy women, their hands resting around their bellies, smiling in anticipation. They are everywhere. I see their bellies more than their faces. I imagine them more than I imagine their children. People ask me sometimes, “Isn’t it hard to work in a children’s hospital surrounded by kids?” But it isn’t the kids who hurt to watch. It’s their mothers. It’s the woman watching her daughter play with blocks in the playroom. It’s the woman rocking her baby while silently singing to him. It’s the women hoping, the women dreaming, the women filled with life while I stand there empty, my hopes and dreams unfulfilled.

I met a woman the other day, the mother of a patient at the hospital. She was leaning against her own mom, fat and uncomfortable, filled with child. “When are you due?” I asked. “August 15.” A moment passed before I realized, it might have been me, uncomfortable, waiting.

Sometimes I wish I hadn’t done that. In some ways, it made the loss more painful. But I tell myself that living in the joy of the moment is important, because it’s all we can do. We don’t know what the future will bring, so we have to be happy with what we have. And I had a pregnancy. I had a pregnancy that lasted 8 weeks. For 4 of those weeks, I knew I was pregnant. And for 2 of those weeks, I found a little happiness. I saw a little hope.

It’s hard being a part of the pregnancy after loss comunity when you aren’t pregnant. I’m forced to think about my own losses each time I go onto Facebook, each time I read an article, each time I see the posts of “Courageous Mamas.” I struggle to be happy for the women who post about their “rainbow babies” on the TTC forum. I’ve been pregnant after loss, but those pregnancies only led to further loss. I want to be happy for those women, but I fear for them.

Sometimes when I see women with their bellies full of child, I hate them a little inside. Then I hate myself. I don’t know their stories. I don’t know what they’ve been through. That’s the thing about pregnancy loss. There are no physical signs of it. We carry the scars on our hearts, not our bodies. We have only the child who lives in our hearts, the scars of that child’s birth and death on our hearts. Though it is painful at times to be a part of this community, I endure through it so that my pain will not be invisible. I continue so that others will hear my story and know that they are not alone, and their pain does not have to be invisible.